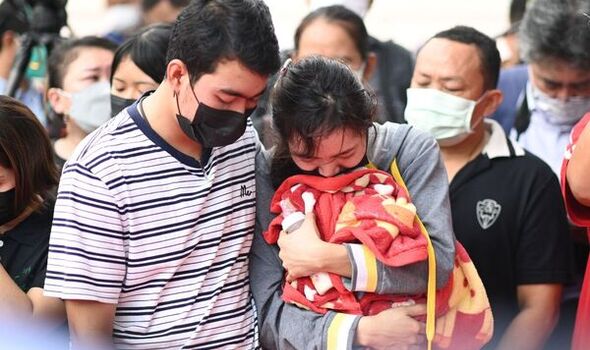 Panya Khamrab burst into a nursery, killing children as young as two after smashing his way into a room where they were asleep. One witness said some were beheaded.

His first victims were staff, including an eight months pregnant teacher who he stabbed as screaming youngsters and adults tried to flee and hide.

Khamrab – who also used a shotgun and 9mm semi-automatic pistol – shot himself dead at his home where he had killed his son, his wife and other adults after mowing down bystanders.

At least 12 people were hurt in the massacre at Utthai Sawan in the north-east of the country.

Thailand national police chief Damrongsak Kittiprapat said former sergeant Khamrab, 34, had been jailed for drug abuse and was due back in court yesterday.

Khamrab had Photos from the scene showed bodies on sleeping mats, covered by white sheets, on the floor of a colourfully decorated classroom.

Jidapa Boonsom, working nearby, said that Khamrab struck at 12.30pm: “The shooter came in around lunchtime and shot four or five officials at the childcare centre first.”

People thought it was fireworks. We were very scared and running to hide once we knew it was shooting.”

Witnesses claimed Khamrab had become agitated after turning up at the site to find his child was not there. One teacher scrambled over a wall after he waved a gun at her.

She said: “I heard multiple gunshots, and then I saw him put in the bullets and point the gun.

“He used a knife and cut all the kids’ heads…he stayed inside for a long time.”

One woman said: “He was in the middle of reloading the gun. I held my hands up and begged for mercy.”

Another added: “Because he’s a parent of one of the kids, at first I thought he was coming to pick up his kids.”

Mass shootings are relatively rare in Thailand despite its gun ownership being much higher than some nearby countries.

A soldier enraged when a property deal went sour murdered at least 29 people and wounded 57 at four locations in 2020.

In ‘The Bear’ on Hulu, a Kitchen Staff Is Nearly Eaten Alive