Neither has worked with the other before, and it remains unclear who has primacy as the lead lawyer on the team. Their uncertain relationship began when Mr. Trump abruptly hired them as his first defense team was falling apart; they now find themselves trying to organize without much idea of what to expect.

Mr. Schoen, 62, graduated from Boston College Law School and has had an eclectic, decades-long legal career.

He has done extensive work on public interest and civil rights cases in the South about matters like police and prison violence and ballot access. Among his many cases, he played a significant role in a class-action lawsuit that challenged Alabama’s foster care system and led to improvements, and he represented the Ku Klux Klan in successfully challenging a law that forbade them from marching while wearing hoods and without paying a fee. The American Bar Association honored Mr. Schoen in 1995 for his volunteer legal efforts.

He has also worked as a criminal defense lawyer, representing an array of sometimes notorious clients, including accused mobsters, rapists and killers. An outspoken supporter of Israel, he has also sued Palestinian terrorists and brought a lawsuit against Simon & Schuster for purported misrepresentations in former President Jimmy Carter’s 2006 book “Palestine: Peace Not Apartheid.”

Richard Cohen, the former president of the Southern Poverty Law Center, said that while he thought Mr. Trump deserved to be convicted, he considered Mr. Schoen “a good lawyer and a good person” who is attracted to complex and challenging cases and is not afraid to take on sometimes unpopular clients.

An observant Jew, Mr. Schoen requested that Mr. Trump’s impeachment trial be paused if it continues past sundown on Friday, to allow him to observe the Sabbath until it ends on Saturday evening. Senator Chuck Schumer, Democrat of New York and the majority leader, said he would “accommodate” the request, which could prolong what both sides had hoped would be a quick proceeding.

Mr. Castor, 59, who did not respond to a request for an interview, brings a different set of experiences. After earning his law degree from George Washington University, he served two terms as the elected district attorney in Montgomery County and a later stint as the Pennsylvania solicitor general. He has since worked as a criminal defense lawyer.

He is most famous for his unapologetic defense of his decision in 2005 not to prosecute Bill Cosby after a Temple University employee, Andrea Constand, accused him of drugging and sexually assaulting her.

Mr. Castor lost re-election to an opponent who had criticized his handling of the case and went on to charge Mr. Cosby with aggravated indecent assault. Trying to get that charge thrown out, Mr. Cosby’s defense team called Mr. Castor as a witness at a hearing in 2016. He argued that his decision not to prosecute had been appropriate.

“I came to the conclusion that there was no way that the case could ever improve and get better with time absent Mr. Cosby’s confession,” Mr. Castor said on the stand. “Andrea Constand’s own actions during that year ruined her credibility as a viable witness.” 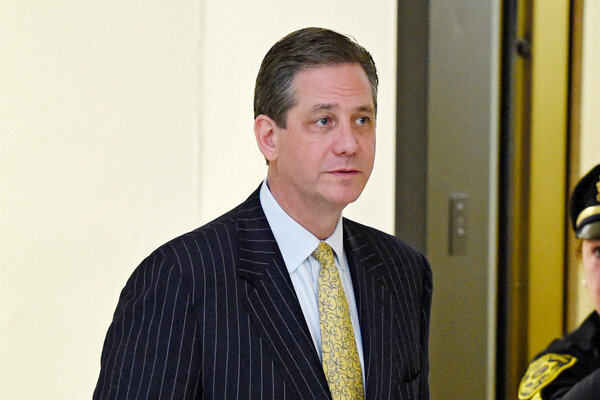 But the judge allowed the case to go forward, and Mr. Cosby was convicted in 2018. Ms. Constand later sued Mr. Castor for defamation, and the two settled outside of court in 2019. Separately, Mr. Castor sued Ms. Constand, arguing that she had filed the defamation case to influence an election in which he failed to regain his district attorney position; a judge dismissed that case.

Mr. Castor was recommended to Mr. Trump and his advisers by his cousin, Stephen R. Castor, a House Republican staff lawyer who helped lead the president’s early defense against his first impeachment in 2019. Stephen Castor clashed with Democrats over Mr. Trump’s attempts to pressure Ukraine into announcing a corruption investigation into Joseph R. Biden Jr., his political rival.

The forces that drew Mr. Schoen to the world of Mr. Trump trace to the 1990s, when he represented two organized-crime convicts. Arguing that prosecutors had improperly withheld evidence that would have helped the defense, Mr. Schoen tried to overturn their convictions but failed.

Andrew Weissmann was one of those prosecutors. When the special counsel leading the Russia investigation, Robert S. Mueller III, hired Mr. Weissmann as a deputy, he became a favorite target of Trump allies seeking to discredit the broader inquiry. Mr. Schoen criticized Mr. Weissmann on Fox News and other conservative news outlets.

The relationship drew closer after Mr. Mueller’s office won convictions of Roger J. Stone Jr., Mr. Trump’s longtime friend and adviser, for crimes like lying to Congress and witness tampering. Mr. Schoen was handling Mr. Stone’s appeal before Mr. Trump granted him clemency. Mr. Schoen said he believed he had been recommended to the president for the impeachment trial as a result of that connection.

Mr. Castor and Mr. Schoen must now defend the former president against a charge of “incitement of insurrection” related to the riot at the Capitol by his supporters on Jan. 6. The case focuses on Mr. Trump’s monthslong campaign to make his followers believe the falsehood that he had won re-election but was denied victory because of fraud, and his exhortations to his supporters at a rally in Washington shortly before the riot to go to the Capitol and “fight like hell” as Congress was trying to formally certify Mr. Biden’s win.

Both Mr. Castor and Mr. Schoen have previously made headlines for other cases in which they pitted expressions of belief not necessarily supported by facts.

In 2002, when Mr. Castor was a district attorney, he fought the release from prison of a man who was exonerated of a rape conviction by a DNA test. The prisoner, Bruce Godschalk, had confessed to detectives but recanted long before his trial, but Mr. Castor had opposed allowing his DNA to be tested.

When scientific evidence refuted the prosecutors’ case against Mr. Godschalk, Mr. Castor questioned the validity of the test results while conceding that he had “no scientific basis” for doing so. Even after further testing confirmed the findings and he was forced to let Mr. Godschalk go, Mr. Castor continued to express doubts about the man’s innocence.

Mr. Schoen has made headlines more recently for expressing a belief that clashes with an official fact-finding conclusion: a medical examiner’s determination that Jeffrey Epstein, the disgraced financier and accused sex criminal, died by suicide in prison in 2019.

Nine days before Mr. Epstein’s death, Mr. Schoen had met with him for hours to discuss taking over his case. Based on Mr. Epstein’s demeanor and excitement about new legal strategies, and citing the nature of his injuries, Mr. Schoen said he did not think he had killed himself.

“I don’t think it was a suicide,” Mr. Schoen reiterated in the interview, adding: “I don’t know what happened. I don’t have a conspiracy theory.”

It has been reported that Mr. Trump and his original legal team, led by Butch Bowers, parted ways because of a clash over whether his defense should focus on his false claim that the election was stolen.

But Mr. Schoen said he had begun working with Mr. Bowers several days before most of the team departed, and that explanation for what happened was not accurate. He said there had been a miscommunication, but he declined to offer further detail other than to insist that “the president hasn’t pushed any agenda on this thing.”

Mr. Castor has also denied that Mr. Trump pushed them to focus on the legitimacy of the election results, telling a Philadelphia radio station that they would instead focus on “technical” legal arguments.

Together, Mr. Castor and Mr. Schoen are expected to argue that the Senate lacks constitutional jurisdiction to try former officials (even though it has done so before), and that Mr. Trump’s incendiary language before the riot fell short of what could yield an incitement conviction in a criminal court because of the First Amendment.

“This is a terrible chill on passionate political speech, even bringing this action,” Mr. Schoen said.

As climate 'net-zero' plans grow, so do concerns from scientists

Opinion | China Won’t Bury Us, Either