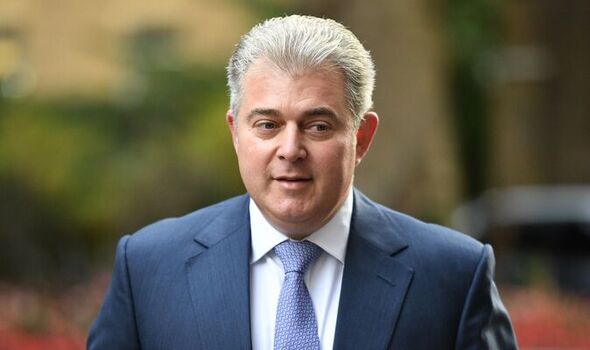 In an exclusive interview with the Daily Express, Northern Ireland Secretary Brandon Lewis has also pledged the cycle of prosecutions and civil cases against former soldiers during the Troubles will be brought to an end.

Mr Lewis will today introduce the second reading in the Commons of the historic Northern Ireland Legacy Bill which is aimed at providing a last chance for the truth to be told about the Troubles before the Good Friday Agreement stated the peace process. From 2000, the Blair Government issued letters to former IRA terrorists that they were no longer being pursued for alleged crimes.

In 2014 the letters emerged in the case of John Downey who was spared prosecution for the 1982 Hyde Park bomb which killed members of the Household cavalry because he had received one of the letters.

Even though a civil case subsequently found him to be responsible for the crime he has never faced criminal proceedings since the original trial collapsed.

Speaking to the Express, Mr Lewis said the new arrangements mean that the letters will no longer provide protection.

He said: “One of the things I will make clear is that they will have no basis in law against this legislation. This legislation takes primacy.

“Somebody who has got one of those kind of letters won’t be able to rely on that to avoid engaging with this body.

“And if they don’t engage with this body the body can investigate with a view to prosecuting.

“Those letters are no shield about doing the right thing.”

The legislation today will provide former terrorists on both sides of the sectarian divide as well as ex-soldiers with protection as long as they engage with a new investigations body which will have full police powers.

Mr Lewis said that the pursuit of soldiers will also come to an end and lawyers who are trying to file civil cases before the Act is passed “are in for a shock” because the cut off date was when the legislation was introduced last year.

He is also clear that three is “no equivalence” between former terrorists and soldiers or members of the Royal Ulster Constabulary (RUC).

“People talk about a rewriting of history over the last few years and it is right we need to bring back some balance.

“The vast majority of those who served whether the RUC or armed forces went out to protect people everyday.

“Which is very different to those who got up in the morning to destroy life.”

He promised that the new system will be like the South African Peace and Reconciliation Commission in its approach, although it can bring criminal prosecutions if people refuse to cooperate.

He noted military veterans have “always engaged very well” with the process and expects that to continue with less certainty around terrorists.

“It may be a very small number of terrorists who come forward but if any one of them does that is another family which gets closure.”

He admitted that it is a “difficult and painful” process abandoning criminal trials but said “we can no longer look at this period through the prism of a courtroom.”

It is hoped that the new arrangement will provide an oral history of the Troubles alongside an official history being commissioned by the Government and a consultation into how best to memorialise the period.

The new investigatory body will also have “unprecedented access” to Government papers from the period.

It is aimed at ending the mistakes of past processes to get to the truth such as the Historical Enquiries Team and the Boston Papers which led to prosecutions of those who cooperated.

Mr Lewis said: “Rather looking at the past in the lens of a courtroom which isn’t delivering for anybody we will finally start getting the truth.

“This is one of those moments which will help Northern Ireland take a big step forward.”

He added that “time is running out” for victims and their families for the truth to be heard with many involved in the troubles reaching old age.

‘Have a word with your leader!’ Johnson shuts down Labour MP in heated strike clash

Mexico president challenges critics to vote him out early

UK vs Russia nuclear arsenal: How the facts stack up as UK dwarfed by Russian might