The German Chancellor intervened to support the European Commission’s aggressive move to curb the export of Covid jabs. In a phone call with the Prime Minister on Sunday, she vented fury that the EU had shipped more than 34 million doses abroad but received “almost nothing” in return from the UK or US. She told the Mr Johnson it was “right” for Ursula von der Leyen to be exploring ways to further restrict shipment until AstraZeneca delivers more doses to member states.

It comes after the Commission President last weekend suggested she could block a shipment of up to 10 million doses to the UK from an AstraZeneca factory in the Netherlands.

But a growing alliance of EU capitals are uncomfortable with her plans to use emergency powers to confiscate life-saving coronavirus vaccines heading for Britain.

The group fear they will not be able to overrule the German eurocrat’s attempts to seize control of shipments destined for our shores.

Dutch PM Mark Rutte has called for urgent talks between Brussels and Downing Street to avert a full-blown vaccine war over the stocks at the Halix facility in Leiden. 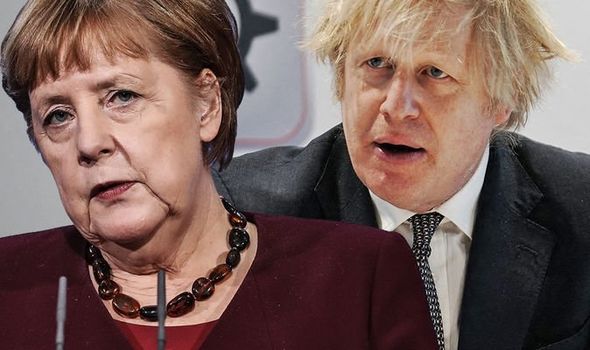 The move would see No10 agree to free up production capacity at the plant, which currently only supplies Britain, to make jabs for Europe too.

He was joined by Irish premier Micheal Martin, who warned eurocrats could endanger the bloc’s jabs rollout by threatening Britain’s supplies.

A senior Dutch source told Express.co.uk: “These vaccines are the results of an integrated global supply chain. We therefore remain in favour of exports unless otherwise decided by the Commission.

“At the same time we must avoid a tipping point whereby exporting to third countries becomes problematic.

“That would result in a lose-lose scenario. To avoid that Brussels, London and AstraZeneca must compromise on the doses produced on the Continent.”

The Dutch government would be forced by the Commission to blockade shipments of the Oxford if a negotiated solution to share doses from the Halix factory isn’t reached, the insider added.

In a radio interview, Irish PM Mr Martin called for an end to the “argy-bargy between Brussels and London, and warned the bloc’s export ban would be a “very retrograde step”.

He said: “If you start putting up barriers, other countries may follow suit in terms of some of those vital raw materials that are required to make the vaccine. If we start that we are in trouble.

“They’re not EU vaccines, these are vaccines paid for by other countries that are manufactured in Europe.”

Belgium, Poland and Sweden will also throw their weight behind the revolt against Mrs von der Leyen’s power-grab later this week at a video conference of European leaders.

Brussels wants to seize control of millions of AstraZeneca doses made at the Dutch Halix factory that are destined for Britain.

The so-called “active ingredient” produced at the plant would later be put into vials at two facilities in the UK helping to produce the Oxford jab.

British and EU officials have held negotiations over the possibility of divvying up the supplies if the bloc agrees to drop demands for UK-made vaccines to be shipped to the Continent.

The compromise is expected to be floated on Thursday at a video summit of European leaders.

But hardline capitals, led by Germany, France and Italy, will call for the bloc’s export ban to be bolstered amid growing anger over an apparent shortage of vaccines.

However, as a possible compromise with Britain emerged, eurocrats were rowing back on their previous threats to blockade shipments of life-saving jabs.

A Commission spokesman said: “This is not about banning vaccine exports. This is about making sure companies deliver on their commitments to the EU.”

An EU official added that Britain was “not to blame” for the bloc’s stand-off with AstraZeneca.

They said: “Its about everyone finding agreement with a company that has been over-selling its production capacity.”

Opinion | ‘The 46th’: Will Georgia’s Races Change the Senate?