“Leave the rest to me” and to congressional allies, the former president is said to have told top law enforcement officials. 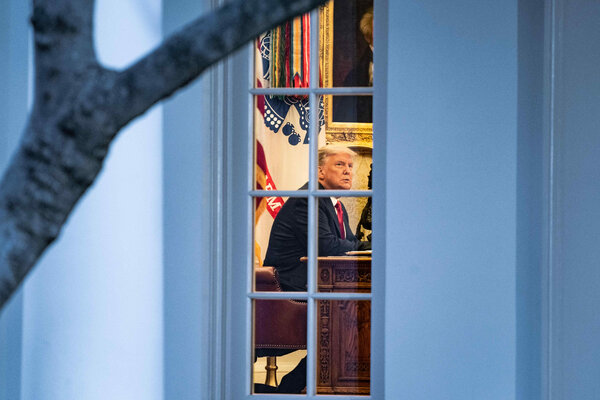 WASHINGTON — President Donald J. Trump pressed top Justice Department officials late last year to declare that the election was corrupt even though they had found no instances of widespread fraud, so that he and his allies in Congress could use the assertion to try to overturn the results, according to new documents provided to lawmakers and obtained by The New York Times.

The demands were an extraordinary instance of a president interfering with an agency that is typically more independent from the White House to advance his personal agenda. They are also the latest example of Mr. Trump’s wide-ranging campaign during his final weeks in office to delegitimize the election results.

The exchange unfolded during a phone call on Dec. 27 in which Mr. Trump pressed the acting attorney general at the time, Jeffrey A. Rosen, and his deputy, Richard P. Donoghue, on voter fraud claims that the department had disproved. Mr. Donoghue warned that the department had no power to change the outcome of the election. Mr. Trump replied that he did not expect that, according to notes Mr. Donoghue took memorializing the conversation.

“Just say that the election was corrupt + leave the rest to me” and to congressional allies, Mr. Donoghue wrote in summarizing Mr. Trump’s response.

Mr. Trump did not name the lawmakers, but at other points during the call, he mentioned Representative Jim Jordan of Ohio, whom he described as a “fighter”; Representative Scott Perry of Pennsylvania, who at the time promoted the idea that the election was stolen from Mr. Trump; and Senator Ron Johnson of Wisconsin, whom Mr. Trump praised for “getting to bottom of things.”

The notes connect Mr. Trump’s allies in Congress with his campaign to pressure Justice Department officials to help undermine, or even nullify, the election results.

Mr. Jordan ultimately voted to overturn the election results in key states, but has downplayed his role in the president’s pressure campaign. “Congressman Jordan did not, has not, and would not pressure anyone at the Justice Department about the 2020 election,” said his spokesman, Russell Dye. “He continues to agree with President Trump that it is perfectly appropriate to raise concerns about election integrity.”

COVID-19: End of school ‘bubble’ system to be announced in next stage of England’s coronavirus roadmap

‘I’m so disappointed in you!’ Caller tears into LBC and Mair over Boris sleaze coverage

Views of 3 Boroughs, Complete With Cocktails