WASHINGTON — The White House physician has not released any update about President Trump’s health since Thursday, nor has the White House made public the results of his latest coronavirus test, which he claims he took on Friday.

But Mr. Trump, eager to prove he has fully recovered a week after being hospitalized for Covid-19, appeared briefly on Saturday afternoon in front of hundreds of chanting supporters gathered at the White House.

“We’ve got to vote these people into oblivion,” Mr. Trump said, re-entering the arena with his signature bluster and without any acknowledgment that he might still be contagious to those around him. His short speech, delivered from the Blue Room balcony overlooking the South Lawn, was the first time he has been seen in public since leaving the hospital on Monday. (A television interview with Fox News that aired Friday night had been pretaped.)

Mr. Trump, who emerged wearing a white surgical mask, peeled it off as he began his remarks. His voice sounded strong and his aggressive message playing down the threat of the virus was unchanged. But the event that the White House had previewed as a huge “peaceful protest for law and order” was uncharacteristically brief.

White House officials said the president would speak for 30 minutes, but he kept his remarks to just 18 minutes in total. A typical Trump rally, in contrast, often runs for at least 90 minutes. A large bandage on top of his right hand was a reminder of the treatments and infusions he has received over the past week. And atypical for a president who usually keeps his crowds waiting, Mr. Trump started right on time.

“We cannot allow our country to become a socialist nation,” Mr. Trump said, as he tried to infuse his campaign with urgency in the final weeks before Election Day. “We cannot let that happen. That’s what would happen. Or worse.”

One White House official said that about 2,000 invitations had been sent out. But the crowd on Saturday was made up of a few hundred attendees, many of whom were in town for a gathering of the so-called Blexit movement, started by the right wing firebrand Candace Owens, which encourages Black voters to leave the Democratic Party. 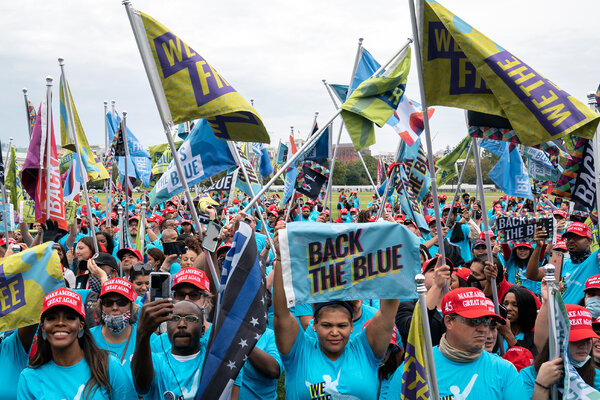 Attendees were asked to fill out questionnaires and undergo temperature screenings before entering the White House complex. They were also advised to wear masks, although many in the audience did not follow those directions.

Some White House advisers did not, either. Dr. Scott W. Atlas, the commentator whose views playing down the threat of the coronavirus have been solicited by Mr. Trump, was seen standing about 20 feet from the crowd with no face covering. Jared Kushner, the president’s son-in-law and senior adviser, was wearing a mask, but his presence in the West Wing on a Saturday was unexpected because he is an observant Jew who has told people he does not typically work on the Sabbath. It was another reminder of how many of the president’s senior advisers have tested positive and are still recovering in quarantine.

The gathering on Saturday was not a campaign event, White House officials said, although most attendees wore “Make America Great Again” red caps, and the president’s speech was filled with attacks against his Democratic rival, former Vice President Joseph R. Biden Jr.

“Sleepy Joe Biden’s betrayed Black and Latino Americans,” Mr. Trump said, as part of his attempt to win over more than the 8 percent of Black voters he won four years ago.

In late August, Mr. Trump also spoke at the Republican National Convention on the South Lawn, delivering his acceptance speech for the nomination in front of the same balcony where he stood on Saturday, continuing to play down the virus despite its entry into his own orbit.

“It’s going to disappear,” he said on Saturday, after underscoring recent “flare-ups” in other countries. He added that “the therapeutics are going to help a lot” and claimed, without evidence, that a vaccine was coming out “very, very quickly.”

The appearance came as Mr. Trump is scheduled to hold his first campaign event on Monday evening in Sanford, Fla., with events in Pennsylvania and other parts of Florida set for later in the week.

For days, Mr. Trump has been pressing advisers to let him resume campaigning, and the White House event on Saturday was a compromise from advisers who wanted to delay the president’s re-entry on the campaign trail.

The gathering was also the latest effort by the president to show he was not as sick as news outlets, including The New York Times, reported last weekend, when he was said to have been administered supplemental oxygen. In a Fox News interview on Friday night, Mr. Trump denied that he had experienced any trouble breathing and said he was no longer taking any medications.

In several phone calls last weekend from the presidential suite at Walter Reed National Military Medical Center, Mr. Trump shared an idea he was considering: When he left the hospital, he wanted to appear frail at first when people saw him, according to people with knowledge of the conversations. But underneath his button-down dress shirt, he would wear a Superman T-shirt, which he would reveal as a symbol of strength when he ripped open the top layer. He ultimately did not go ahead with the stunt.

At the White House on Saturday, Mr. Trump took note of the teal blue shirts the attendees wore, pointed to the crowd and said, “I want to put one of them on instead of a white shirt.”

And he implored his Black and Latino supporters to focus on the damage caused by unrest in cities across the country. “The homes and churches and businesses of Black Americans have been looted,” Mr. Trump said. “You know that.”

Merkel panic: Covid vaccines to be made mandatory for all German armed forces personnel

Opinion | This Is No Way to End a Pandemic