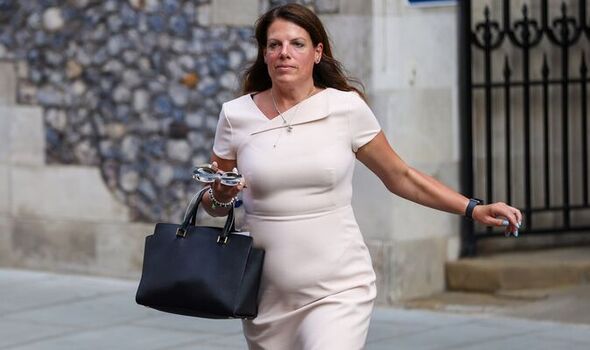 Caroline Nokes, chair of the House of Commons’ women and equalities committee, described how close friends stepped in to intervene. The MP for Romsey and Southampton North has now backed calls for education on coercive control to be mandatory in all sixth forms and colleges.

Ms Nokes, 50, said: “As a teenager at sixth form college, I recall a boyfriend turning me, quite literally, into a shadow of my former self.

“It was only the friends who stepped in, who helped me recognise it was not normal to allow another person to dictate your every action, how you spent your time, what you wore and what you weighed.

“But we cannot leave it to friends and family. We have to make sure young people don’t just leave school with a clutch of GCSEs, but that they leave with self-confidence, and equipped with the tools they need to be healthy and happy adults.”

Domestic abuse charity Refuge has partnered with survivors and the Daily Express to demand change.

Half of 16 to 19-year-olds surveyed by Refuge said they had experienced controlling or coercive behaviour in a relationship.

But less than half said they have received or are set to receive education about it.

Refuge is now urging the Government to make education on domestic abuse and controlling or coercive behaviour mandatory in post-16 education.

“The first thing survivors calling our National Domestic Abuse Helpline usually say is, ‘I’m not sure if I’m being abused but I don’t think my relationship is right.’

“We need to understand what ‘normal’ and healthy relationships are so that when abusive behaviours occur they are noticed, and better understood.

“So many survivors of abuse say they wish they were taught more about red flags so they could have sought help earlier.

“Teens and young adults are especially vulnerable because they are at such an exciting and changeable period in their lives, and often entering intimate partner relationships for the first time, whilst still in full-time education.”

Currently, lessons about domestic abuse are a compulsory part of the relationships and sex education curriculum in all state secondary schools, covering years seven to 11.

Coercive control is a pattern of behaviour which tries to undermine a person’s self-esteem and restrict their freedom.

It can involve a variety of controlling acts, including manipulation, intimidation, sexual coercion or gas lighting – a form of psychological abuse in which a victim is manipulated into doubting their own memory and sanity.

An estimated 2.3 million adults aged 16 to 74 experienced domestic abuse in the year up to March 2020, statistics showed.

The number of domestic abuse-related crimes recorded by police in England and Wales rose six percent in the year ending March 2021 to 845,734. It reflected better recording by the police alongside increased reporting by victims, it was said.

University student Faustine Petron, 22, has launched a petition demanding educational change and has amassed more than 62,000 signatures so far through her campaign Make it Mandatory.

A Department for Education spokeswoman said: “Domestic violence is a horrific crime.

“To help children and young people learn about healthy relationships early on we have made age-appropriate relationship, sex and health education lessons in schools compulsory, so that by the time they leave school they are familiar with these issues.

“Schools and post-16 providers should be alert to issues such as everyday sexism, misogyny and gender stereotypes and take action to build a culture where these are not tolerated, and any occurrences are identified and tackled.”

Brazil's Bolsonaro says he wants to punch reporter in face