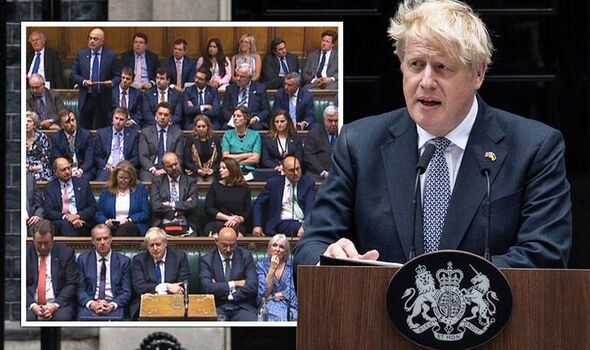 Conservative backbenchers will tonight consider whether to change the party’s rules to force the Prime Minister to hand over to a caretaker in a bid to see off a no-confidence vote being threatened by Sir Keir Starmer.

The opportunistic Labour leader has vowed to hold a Commons vote on the Government unless the Tories take action to remove Mr Johnson from No10 immediately.

Senior Tory MPs on the party’s powerful 1922 committee will determine how to act tonight when it meets to decide the terms of the leadership election to replace the Prime Minister.

Just four days after Mr Johnson announced his resignation, as many as a dozen MPs are now in the running to take over the top job.

The 1922 committee is thought to be planning to increase the number of nominations required for candidates to formally enter the race in a bid to quickly whittle down the number of people taking part in the contest.

Treasurer of the 1922 Committee Sir Geoffrey Clifton-Brown said yesterday: I am absolutely confident that we will get it down to the last two by July 20.

“I think that is imperative and I actually think that we need, on behalf of the country, to make sure we get on with this whole process so the period of uncertainty is as short as possible before we get a new Prime Minister.”

MPs want to reduce the number to just two by July 20 with the membership then given a say on the final winner and a new leader in place by September.

Round one of voting is set to occur as soon as Wednesday, with several candidates expected to be knocked out.

The rules of the contest will be determined after elections for the executive of the 1922 committee are completed this afternoon.

The newly formed group will meet at 5pm and look at whether to require the incumbent leader to step down and be replaced by an interim leader while the contest plays out.

It would see off Labour’s threat to call a no-confidence vote unless Mr Johnson is removed from office.

Deputy Labour leader Angela Rayner said on Friday: “He’s a proven liar who’s engulfed in sleaze and we can’t have another couple of months of this, you know.

“So they do have to get rid of him, and if they don’t, we will call a no-confidence vote because it’s pretty clear – he hasn’t got the confidence of the house or the British public.”

If a no-confidence motion passes, the Queen must either invite another MP to try and form a Government within 14 days or call a snap general election.

Labour hopes their motion will sow division among the Tories, leaving them grappling with whether to risk their reputation by backing Mr Johnson in the vote, or risk causing a general election by voting alongside the Opposition.

A vote could be tabled as soon as tomorrow and take place on Wednesday.

NZ’s next Government: Here’s how the political parties could match up

Into The Grey Zone podcast: Episode Seven – A Battle of Values