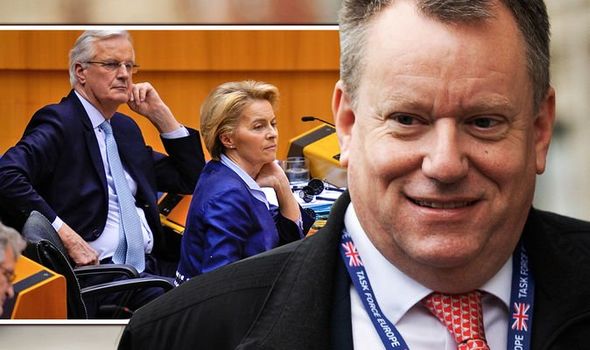 Britain’s chief negotiator of the EU trade deal has told peers Brussels is still learning to adapt to the new relationship with the UK.

He told the Lords European Union Committee: “We said last year during the negotiations that we wanted friendly cooperation between sovereign equals as our vision of the future and that’s still what we want.

“I don’t think that’s been quite the experience of the last few weeks if we’re honest about it.

“I think the EU is still adjusting somewhat, as we thought they might, to the existence of a genuinely independent actor in their neighbourhood and obviously there’s been a certain amount of disagreement over the vaccine issues which in many ways have created political difficulties on the EU side.”

Lord Frost, who spent over a year locked in talks with Brussels, criticised the behaviour from the trade bloc since the end of the transition period.

He said relations had been “more than bumpy” and said a different approach from the EU was required.

“It is going to require a different spirit probably from the EU but I’m sure we are going to see that and see some of this subside as we go forward,” he said.

“None of those things are in themselves dramatic, although some have been very, very serious. We have behind that obviously the Northern Ireland issues.”