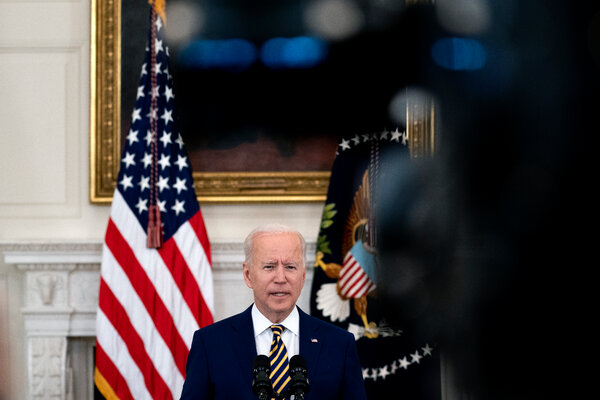 The White House outlined a plan on Monday to allocate 55 million doses of coronavirus vaccine around the world, the remainder of 80 million doses that President Biden pledged to send by the end of June to countries desperate for vaccine.

Mr. Biden has a week and a half to meet his deadline, a task made more difficult as the administration tries to change which manufacturers’ vaccines would be included in the 55 million portion. Production problems at an Emergent BioSolutions factory in Baltimore have forced the administration to revise its initial plan to rely heavily on AstraZeneca’s vaccine for that donation. The White House did not specify on Monday which vaccines it would be sharing, but people familiar with the operation have said the administration is working to swap shots made by Pfizer and BioNTech, Moderna and Johnson & Johnson for AstraZeneca’s.

The distribution formula closely followed the one that the White House announced earlier this month for the first 25 million doses in the president’s pledge. Three-fourths of the 55 million doses will go to Covax, an international vaccine sharing initiative that helps less wealthy nations. Of those, 14 million will go to countries in Latin America and the Caribbean; 16 million will be distributed to nations across Asia; and 10 million will be sent to countries in Africa.

The donation of 80 million doses pales in comparison to the Biden administration’s plan, announced in early June, to share 500 million doses of Pfizer’s vaccine within the next 12 months. But with many countries unable to vaccinate even a tiny percentage of their populations, global health officials are pressing the United States to move as quickly as possible to share its vaccine supply.

The federal government has purchased far more vaccine than the nation can possibly use, and distributed more than states can promptly administer as the pool of people eager to get vaccinated dwindles. More than 60 million doses of Pfizer, Moderna and Johnson & Johnson are sitting in storage in states across the nation, according to the latest figures from the Centers for Disease Control and Prevention.

The White House said it is still working through a variety of logistical and regulatory issues involved in shipping vaccine overseas, like safely transporting the doses and, at times, having to send related supplies, like syringes and alcohol pads, along with them. It said it will release which specific vaccines are being shared and in what amounts later.