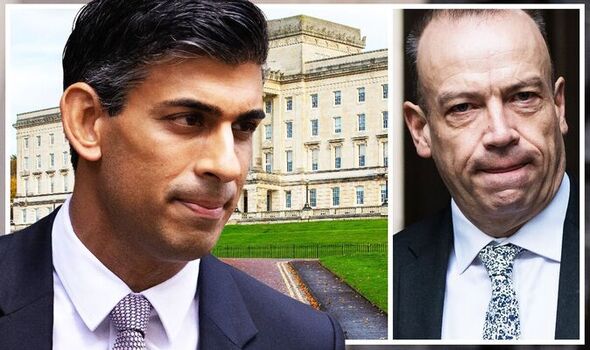 Northern Ireland Secretary Chris Heaton-Harris said pushing back the vote would give the UK and EU more time to find a solution to the divisive trade Protocol. It is hoped the January 19 election deadline will allow the power-sharing executive to be restored.

The DUP collapsed the executive in May and has refused to restart it while the Protocol is in place.

The protocol was designed to ensure free trade could continue across the Irish land border, but it has led to new checks on some goods moving between Great Britain and Northern Ireland.

Mr Heaton-Harris told MPs: “The one thing that everyone agrees on is that we must try and find a way through this current impasse.

“This aims to create the time and space needed for talks between the UK Government and the European Commission to develop, and for the Northern Ireland parties to work together to restore the devolved institutions as soon as possible.”

And in a warning to the unionists Mr Heaton-Harris said he would legislate to cut the pay of MLAs while the assembly does not sit.

Hopes of a breakthrough over the protocol have increased in recent days following months of stalemate.

Rishi Sunak is due to hold talks with his Irish counterpart Micheal Martin at the British-Irish Council summit in the North West tomorrow (Thursday).

In a speech the Prime Minister will reiterate his commitment to restoring the Northern Ireland Executive.

“The British-Irish Council is a vital East-West body under the Belfast (Good Friday) Agreement, an agreement that I am deeply committed to,” he is expected to say.

“We all want to see power sharing restored as soon as possible.

“I’m determined to deliver that.”

Ireland’s foreign minister Simon Coveney has said a deal between the EU and the UK on post-Brexit trading arrangements in Northern Ireland is possible before January.

Officials from the bloc are said to be carrying out checks on a UK database system that would alleviate customs problems at Ulster’s sea borders with Britain.

If it meets with approval it could create a landing strip for a deal.

A senior government source said: “Talks are progressing well. We are confident this extra time will be enough to secure a favourable outcome for everyone.”

The Taliban are poised to name a supreme leader and map out their government.