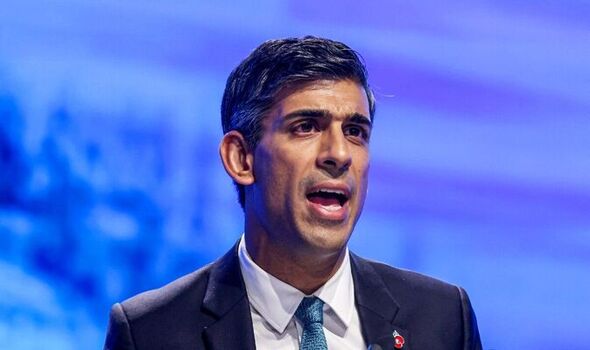 Rishi Sunak is considering raising the top rate of income tax at the Autumn Statement, as the Government attempts to fill a £60billion hole in the public finances. Such a move would be in breach of the Conservative Party’s 2019 manifesto, in which the party explicitly promised not to increase the tax band. It would also be a dramatic reversal of policies pursued by Mr Sunak’s predecessor Liz Truss, who attempted to abolish the top rate of tax altogether, before later reinstating it when the plans caused chaos in the markets.

The Government is understood to be discussing expanding the tax band, either through an increase to the 45 percent rate or lowering the £150,000 annual income threshold at which it kicks in.

Chancellor Jeremy Hunt is reportedly looking to implement an equal split of 50 percent tax rises and 50 percent spending cuts, which could translate to at least £25billion in hikes for taxpayers.

This would increase the amount taxpayers pay, as many would be pulled into higher tax bands as a result of inflation.

But Whitehall sources told the Telegraph that discussions in No. 10 have turned to larger individual tax rises ahead of the November 17 statement.

Increasing the rate from 45 percent to 50 percent would raise a few billion pounds a year, according to broad estimates from the Institute for Fiscal Studies think tank.

Meanwhile, slashing the threshold from £150,000 to £140,000 could raise close to half a billion pounds, according to the IFS estimates.

However, there are fears either move could drive away some of the UK’s highest earners.

The IFS’s director, Paul Johnson, told The Telegraph: “There are various issues. One, is it a good way of raising a lot of extra money? No, because increasing the top rate brings a huge amount of uncertainty about future revenues and on a central estimate it would raise very little.

“Is raising it a good way of reducing inequality? It might be, so you might want to do it for that reason.

“Are there risks for raising it? Yes there are. Quite a sizeable fraction of those people at the top are foreign-born, meaning they could choose to live elsewhere if they wanted.

“People paid in dividends and non-traditional income streams could also change their arrangements in the future.”

Pakistan: Pair sentenced to death for raping woman in front of children after car ran out of fuel

US economy to recover only when people feel 'safe' from Covid-19: Fed chief