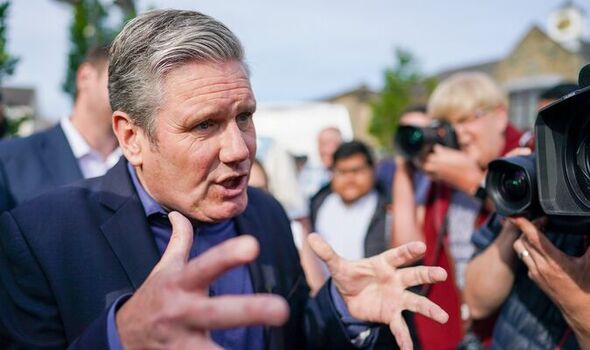 Party sources confirmed on Tuesday that the Labour leader had decided to allow the Left-wingers to keep their jobs after showing solidarity with union militants responsible for bringing misery to millions of passengers in last week’s walk outs. Labour chief whip Alan Campbell is understood to have spoken to the frontbenchers including shadow justice minister Alex Sobel who posted pictures of themselves on picket lines on social media.

Party chiefs are also expected to send them letters warning them about their future conduct. But no further disciplinary action is expected to be taken against them.

The five frontbenchers were among at least 25 Labour MPs who joined Rail, Maritime and Transport union members demonstrating in support of the national walk out.

Tory MP Brendan Clarke-Smith said: “This shows that the Leader of the Opposition has lost control, not just of his backbenchers, but also of his frontbench too.

“The vultures are circling already and it is clear that some people are now vying for trade union support and have joined pickets to gain this. Discipline has clearly completely broken down.

“Labour should be standing up for working people and all those who have suffered at the hands of these unjustified strikes, but instead they say nothing in public whilst their MPs actively back their union paymasters.”

Navendu Mishra, a Labour whip, tweeted during the strike last Tuesday: “As a proud trade unionist, I stand with all workers on our railway network who are taking industrial action to fight for their jobs & keep passengers safe.”

Ahead of the strike, Sir Keir issued a memo to frontbenchers insisting they “should not be on picket lines.”

Sources close to the leader suggested at the time he would take a tough line on the issue.

But his edict enraged Left-wingers and threatened to split the party.

Other frontbenchers stopped short of attending picket lines but made their support for the industrial action clear. Labour deputy leader Angela Rayner tweeted: “Workers have been left with no choice.”

Sir Keir also sparked bemusement in Labour ranks on Tuesday by admitting he was dumping all the party’s policies and “starting from scratch.”

At an event hosted by the New Statesman magazine, the Labour leader said he had abandoned the party’s entire 2019 general election manifesto, drawn up under his hard-Left predecessor Jeremy Corbyn’s leadership.

“What we’ve done with the last manifesto is put it to one side. We’re starting from scratch. The slate is wiped clean,” Sir Keir said.

“What we do have to recognise is that having come through the pandemic, we need to look at everything in the round, and make choices about where we want to put our money.”

He admitted he had abandoned some of his radical views of the past and defended the right of politicians to change their minds.

“If you don’t change your views as you experience life, then you’re probably not going to get very far,” the opposition leader said.

Winter is going to be tough, admits Liz Truss