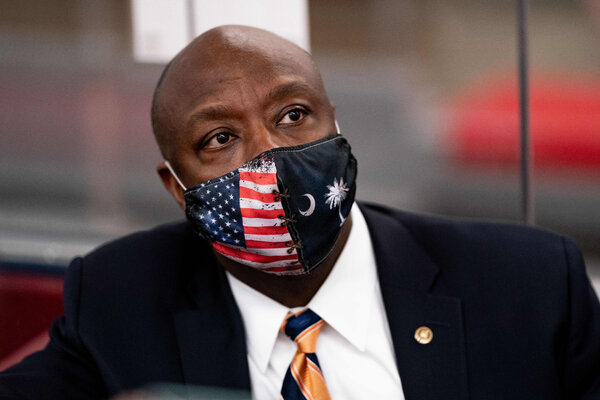 Mr. Scott was chosen for the task by his party’s top congressional leaders, Senator Mitch McConnell of Kentucky and Representative Kevin McCarthy of California, at a time when Republicans are seeking to expand their appeal to nonwhite groups that have traditionally voted Democratic. In a party still divided over the legacy of former President Donald J. Trump, Mr. Scott is also a rare figure able to unite competing factions.

“He is one of the most inspiring and unifying leaders in our nation,” Mr. McConnell said in a statement announcing the decision on Thursday. “As Senator Scott likes to say, he is living his mother’s American dream, and he has dedicated his career to creating more opportunity for our fellow citizens who need it most. Nobody is better at communicating why far-left policies fail working Americans.”

Mr. Biden is expected to use much of his address, his first before Congress since being inaugurated, to build public support for his multi-trillion-dollar jobs and infrastructure plans. Republicans fiercely oppose the proposals as too expensive and too intrusive, and it will be up to Mr. Scott to make their case.

In his own statement, Mr. Scott said he would deliver an “optimistic vision” for the country focused on economic growth and “empowering working families.”

The task is a notoriously difficult one, with a nationally televised format that often results in stilted remarks or memorable gaffes. But it has also helped build national prominence for up-and-coming politicians in both parties, including Mr. Biden when he still served in the Senate decades ago. (Mr. Scott also had a prime speaking slot during the Republican National Convention last year.)

The senator, 55, has a remarkable personal story. He was raised by a single mother in Charleston, S.C., and blazed a trail through state politics in a party where most of the other members are white. He first won a seat in the House amid the Tea Party wave of 2010 and was appointed to the Senate three years later.

His work in Congress has focused primarily on economic development and tax issues. His plan to create opportunity zones to incentivize companies to invest in economically distressed areas became a centerpiece of Republicans’ $1.5 trillion tax-cut bill.

Mr. Scott is arguably his party’s leading voice on matters of race. When the nation erupted in protest last summer after the murder of George Floyd, a Black man, by a white Minneapolis police officer, it was Mr. Scott who stepped in to write a Republican proposal to push the nation’s police forces to weed out the use of excessive force and racial profiling in their ranks.

Senate Democrats pushing for a more aggressive federal intervention killed the bill at the time. But as he prepares for his speech next Wednesday, Mr. Scott is among a bipartisan group of lawmakers who have recently revived talks over a policing bill and are hoping to steer Congress toward a compromise measure.

Mr. Scott said on Wednesday that the two parties were “on the verge” of a compromise, though major political and ideological hurdles remained.

Nigel Farage hits out at Sturgeon and Salmond over independence row: ‘Goal is wide open!’

‘Our infrastructure needs love’: Montreal road network gets $1B boost from Quebec