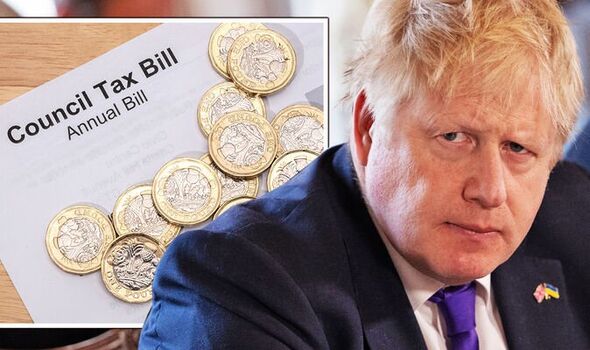 Such a move could save the average household as much as £556 a year as the cost of living crunch bites. Polling shows that voters in the North of England are strongly in favour of reforming the levy and that every constituency in the country backs a new property tax.

The findings come as both Conservative and Labour MPs urge the Government to reform the “outdated and unfair” system with council tax bills set to rise next week.

This would be levied on the current value of properties rather than on 1991 levels.

Such a move could lead to bills falling for 77 percent of the country, with the average household likely to be £556 a year better off.

The polling found that the policy could be a “game changer” at the next election.

Were Labour to introduce a PPT, the policy could help the party gain as many as 52 seats including 43 in the so called ‘Red Wall’.

They could also make gains in Scotland and would see their vote share increase among swing voters by net 15 per ent.

If the Conservatives were to back the policy, their share of swing voters would increase markedly with 41 percent of undecideds more likely to lend their support to the party. Replacing Council Tax could see them gain as many as 60 seats in the next general election compared to their current position and hold on to the majority of Red Wall seats they won in 2019.

In Bury North, the most marginal constituency in England with a Tory majority of just 105, Labour could win 59 percent of the vote were the party to back a PPT.

The average household in the constituency would be better off to the tune of £550 a year.

A similar outcome would occur in Bolton North East, the study shows, with the average household in the constituency better off to the tune of £700 a year.

Many households face annual council tax hikes from next month.

According to the Chartered Institute of Public Finance and Accountancy the average household will pay £65 more than they have this year.

Findings from the polling add to the growing pressure for change with leading politicians from across the political spectrum publicly supporting calls for change including a number of MPs in Red Wall seats.

Conservative MP John Stevenson, Deputy Chairman of the Northern Research Group, said: “If the Conservative Party wants to deliver for voters and retain the ‘red wall’ seats that we won at the last general election then making our property taxes fairer is one of the ways to do it.

“We can now see clearly that voters in many marginal constituencies and others are overwhelmingly in favour of scrapping Council Tax. In its place they want a system of proportional property tax that would mean lower bills for the majority of households up and down the country.”

Fellow Tory Aaron Bell, the MP for Newcastle-under-Lyme, said: “Abolishing council tax and stamp duty and replacing them with a fairer property tax is the right thing to do for millions of people up and down the country. And, with voters across the UK backing a proportional property tax by over three to one, I believe it is also the right thing for the Conservative Party, helping secure for the long-term the support of those voters who switched to us in 2019.”

And Simon Fell, Conservative MP for Barrow and Furness, added: “Now we know that the majority of people in constituencies up and down the UK want a simpler and fairer property tax system, there is no excuse for politicians not to deliver.

“Rather than sticking with an unjust and outdated council tax system, my party should go into the next general election promising voters a modern and progressive proportional property tax. This much-needed reform would lift a disproportionate burden from young people while delivering lower bills for millions of hard-pressed households across the country.”

Dame Margaret Hodge, the Labour MP for Barking, said the existing system of property taxation in the UK is “deeply flawed and highly regressive.”

“Now we can see that voters overwhelmingly want a fairer system, we urgently need to have serious debate about delivering exactly that. As the Government preside over a cost-of-living crisis and we head into a spring of tax hikes and soaring prices, there is a stronger case than ever for looking closely at a proportional property tax which would result in permanently lower bills for most households with no cost to taxpayers.”

Andrew Dixon, chairman of Fairer Share, said: “People up and down the UK are sick to the back teeth of council tax. They overwhelmingly want a fairer system in its place that reflects the true value of their homes. Our polling shows just how strong that feeling is and how reforming our property taxes holds the key to success at the next general election.”

“Both parties currently sit in a quagmire. The Conservatives are falling behind Labour in the polls, while Labour is still not trusted enough to win convincingly.

“This research shows that a proportional property tax could well be the way for either party to convince the electorate they are the party for them.

“Rarely do individual policies move the dial as much as this one does: it is highly popular with swing voters, and our modelling shows that it can bolster Conservative and Labour support – depending on who backed it – in the North and the Midlands but also across the country.”

Biden to attack Trump on healthcare in election battleground state

How cloud accounting keeps your business nimble in the new normal