As the election returns rolled in showing President Donald J. Trump winning strong support from blue-collar voters in November while suffering historic losses in suburbs across the country, Senator Josh Hawley of Missouri, a Republican, declared on Twitter: “We are a working class party now. That’s the future.”

And with further results revealing that Mr. Trump had carried 40 percent of union households and made unexpected inroads with Latinos, other Republican leaders, including Senator Marco Rubio of Florida, trumpeted a political realignment. Republicans, they said, were accelerating their transformation into the party of Sam’s Club rather than the country club.

But since then, Republicans have offered very little to advance the economic interests of blue-collar workers. Two major opportunities for party leaders to showcase their priorities have unfolded recently without a nod to working Americans.

In Washington, as Democrats advance a nearly $2 trillion economic stimulus bill, they are facing universal opposition from congressional Republicans to the package, which is chock-full of measures to benefit struggling workers a full year into the coronavirus pandemic. The bill includes $1,400 checks to middle-income Americans and extended unemployment benefits, which are set to lapse on March 14.

And at a high-profile, high-decibel gathering of conservatives in Florida last weekend, potential 2024 presidential candidates, including Mr. Hawley and Senator Ted Cruz of Texas, scarcely mentioned a blue-collar agenda. They used their turns in the national spotlight to fan grievances about “cancel culture,” to bash the tech industry and to reinforce Mr. Trump’s false claims of a stolen election.

Inside and outside the party, critics see a familiar pattern: Republican officials, following Mr. Trump’s own example, are exploiting the cultural anger and racial resentment of a sizable segment of the white working class, but have not made a concerted effort to help these Americans economically.

“This is the identity conundrum that Republicans have,” said Carlos Curbelo, a Republican former congressman from Florida, pointing to the universal opposition by House Republicans to the stimulus bill drawn up by President Biden and congressional Democrats. “This is a package that Donald Trump would have very likely supported as president.” 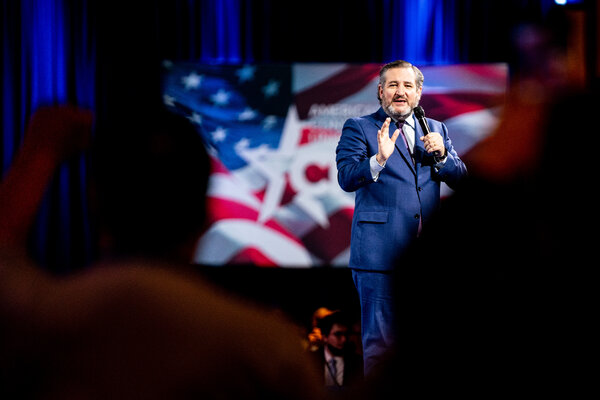 “Here is the question for the Rubios and the Hawleys and the Cruzes and anyone else who wants to capitalize on this potential new Republican coalition,” Mr. Curbelo added. “Eventually, if you don’t take action to improve people’s quality of life, they will abandon you.”

Some Republicans have sought to address the strategic problem. Senator Mitt Romney of Utah put forward one of the most ambitious G.O.P. initiatives aimed at struggling Americans, a measure to fight child poverty by sending parents up to $350 a month per child. But fellow Republicans rebuffed the plan as “welfare.” Mr. Hawley has matched a Democratic proposal for a $15 minimum wage, but with the caveat that it applies only to businesses with annual revenues above $1 billion.

Whit Ayres, a Republican pollster whose clients have included Mr. Rubio, was critical of Democrats for not seeking a compromise on the stimulus after a group of G.O.P. senators offered a smaller package. “Seven Republican senators voted to convict a president of their own party,” he said, referring to Mr. Trump’s impeachment. “If you can’t get any of them on a Covid program, you’re not trying real hard.”

As the Covid-19 relief package, which every House Republican voted down, makes its way through the Senate this week, Republicans are expected to offer further proposals aimed at struggling Americans.

Mr. Ayres said that the Conservative Political Action Conference in Orlando, Fla., last weekend, the first major party gathering since Mr. Trump left office, had been a spectacularly missed opportunity in its failure to include meaningful discussion of policies for blue-collar voters. Instead, the former president advanced an intraparty civil war by naming in his speech on Sunday a hit list of every Republican who voted to impeach him.

“You’d better be spending a lot more time developing an economic agenda that benefits working people than re-litigating a lost presidential election,” Mr. Ayres said. “The question is, how long will it take the Republicans to figure out that driving out heretics rather than winning new converts is a losing strategy right now?”

Separately, one of the highest-profile efforts to lift blue-collar workers in the country was underway this week in Alabama, where nearly 6,000 workers at an Amazon warehouse are voting on whether to unionize. On Sunday, the pro-union workers got a boost in a video from Mr. Biden. Representatives for Mr. Hawley — who has been one of the leading Republican champions of a working-class realignment — did not respond to a request for comment about where he stands on the issue.

The 2020 election continued a long-term trend in which the parties have essentially swapped voters, with Republicans gaining with blue-collar workers, while white-collar suburbanites moved toward the Democrats. The idea of “Sam’s Club conservatives,” which was floated about 15 years ago by former Gov. Tim Pawlenty of Minnesota, recognized a constituency of populist Republicans who favored a higher minimum wage and government help for struggling families.

Mr. Trump turned out historic levels of support for a Republican among white working-class voters. But once in office, his biggest legislative achievement was a tax cut in which most benefits went to corporations and the wealthy.

Oceans of ink have been spilled over whether the white working class’s devotion to Mr. Trump had more to do with economic anxiety or with anger toward “elites” and racial minorities, especially immigrants. For many analysts, the answer is that it had to do with both.

His advancement of policies to benefit working-class Americans was frequently chaotic and left unresolved. Manufacturing jobs, which had continued their slow recovery since the 2009 financial crisis, flatlined under Mr. Trump in the year before the pandemic hit. The former president’s bellicose trade war with China hit American farmers so hard economically that they received large bailouts from taxpayers.

“There was never a program to deal with the types of displacements going on,” said John Russo, a former co-director of the Center for Working-Class Studies at Youngstown State University in Ohio.

He projects that once the economy snaps back to pre-pandemic levels, blue-collar Americans will be worse off, because employers will have accelerated automation and will continue work-force reductions adopted during the pandemic. “Neither party is talking about that,” Mr. Russo said. “I think that by 2024, that’s going to be a key issue.”

It’s possible that Republicans who are not prioritizing economic issues are accurately reading their base. A survey last month by the G.O.P. pollster Echelon Insights found that the top concerns of Republican voters were mainly cultural ones: illegal immigration, lack of support for the police, high taxes and “liberal bias in mainstream media.”

Despite Mr. Biden’s campaign framing him as “middle-class Joe” from Scranton, Pa., as a candidate he made only slight inroads into Mr. Trump’s support with white voters without college degrees, which disappointed Democratic strategists and party activists. In exit polls, these voters preferred Mr. Trump over Mr. Biden by 35 percentage points.

Among voters of color without a college degree, Mr. Trump won one out of four votes, an improvement from 2016, when he won one in five of their votes.

His inroads with Latinos in South Florida and the Rio Grande Valley of Texas especially shocked many Democrats, and it spurred Mr. Rubio to tweet that the future of the G.O.P. was “a party built on a multi-ethnic multi-racial coalition of working AMERICANS.”

After the Trump presidency, it is an open question whether any other Republican candidates can win the same intensity of blue-collar support. “Whatever your criticisms are of Trump — and I have a lot — clearly he was able to connect to those people and they voted for him,” said Representative Tim Ryan of Ohio, a Democrat from the Youngstown area.

Mr. Ryan is gearing up to run in 2022 for an open Senate seat in Ohio. He agrees with Mr. Trump about taking on China, but faults him for not following up his tough language with sustained policies. “I think there’s an opportunity to have a similar message but a real agenda,” he said.

As for Republican presidential candidates aspiring to inherit Mr. Trump’s working-class followers, Mr. Ryan saw only dim prospects for them, especially if they continued to reject the Biden stimulus package, which passed the House and is now before the Senate.

“The Covid-19 relief bill was directly aimed at the struggles of working-class people,” Mr. Ryan said, adding that Republicans voting against the package were “in for a rude awakening.”

Perhaps. A Monmouth University poll on Wednesday found that six in 10 Americans supported the $1.9 trillion package in its current form, especially the $1,400 checks to people at certain income levels.

But Republicans who vote it down may not pay a political price, said Patrick Murray, the poll’s director. “They know that the checks will reach their base regardless, and they can continue to rail against Democratic excesses,” he said.

“There would only be a problem if they somehow managed to sink the bill,” he added.