WASHINGTON — House Republicans sharply questioned intelligence officials on Thursday about their work on domestic violent extremism, expressing concerns about the fact that the agencies could be asked to spy on Americans.

In a contentious hearing of the House Intelligence Committee, Republican lawmakers expressed doubts about intelligence agencies and said they were worried about how they had handled a range of matters, including the suspension of a former senior Trump administration official as the general counsel of the National Security Agency and the F.B.I.’s view of the threat from the loose far-left movement known as antifa.

The most enlightening exchange was between Representative Chris Stewart, Republican of Utah, and Avril D. Haines, the director of national intelligence. Mr. Stewart began by asking whether the intelligence community was spying on Americans by doing work on domestic violent extremism.

House Republicans have taken issue with a March report on domestic violent extremism prepared by Ms. Haines’s office. The short report said white extremists and racially motivated violent extremists presented the most lethal threats, and were most likely to have “concerning transnational connections.” It contained little that the F.B.I. director, Christopher A. Wray, had not previously disclosed in congressional testimony.

Before raising the report, Mr. Stewart began with a more fundamental question.

“Do you think that the C.I.A. should be spying on American citizens?” he said. “I’m just asking a simple question.”

Ms. Haines said no, adding that the purpose of the C.I.A. was not to collect information on the public.

But Ms. Haines pushed back. The National Counterterrorism Center, the agency that participated in the report, has the authority to receive domestic intelligence, she answered.

“It’s not collecting it, but it’s receiving it,” she said.

The statute that created the counterterrorism center, she said, allows it to bring together domestic and international intelligence and analyze it, so that policymakers have a comprehensive view of threats. 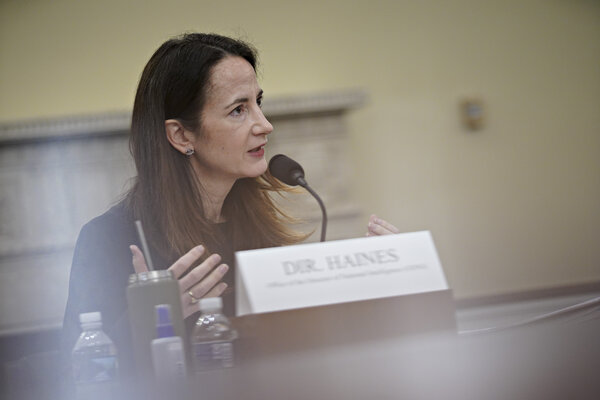 Mr. Stewart was not convinced. “I just disagree with you,” he said. “And I think the American people should be scared to death of this.”

The debate over intelligence agencies’ spying on Americans is an enduring one, though often liberal lawmakers are raising the issue, rather than conservatives.

Privately, senior intelligence officials have said that even as they step up examinations of foreign groups trying to influence American politics, they are keenly aware of concerns that the C.I.A. and National Security Agency cannot take any action that looks like spying on citizens.

Intelligence agencies have begun to look at ways to improve coordination between the C.I.A. and F.B.I., but still ensure that the spy agency is not collecting information on the public.

At the hearing, Ms. Haines said she welcomed Mr. Stewart’s tough questioning. The intelligence community, she said would not be involved in collecting intelligence on Americans, just analyzing to support the F.B.I. and other parts of the government that have limited authorities in some instances to surveil Americans.

“What we are trying to do is, I believe, within the law,” she said. “It’s a challenging issue that we’re going to face across a range of spaces we’re dealing with — whether it be cyber, malign influence or other places — where bringing together domestic intelligence and international intelligence, in order to provide a comprehensive picture, is critical.”

In an interview before the hearing, Representative Adam B. Schiff, the California Democrat who leads the House Intelligence Committee, said the nature of the terrorism threat facing the United States had changed, shifting from the international threat of Al Qaeda or the Islamic State to domestic terrorism motivated by white nationalism.

“That requires a very different approach,” he said.

Throughout the Trump administration, the House Intelligence Committee has been bitterly divided. Democrats on the committee have explored Russian efforts to influence American politics. But Republicans have disputed many of those findings, and instead attacked the F.B.I. and intelligence agencies’ work to examine Moscow’s influence operations.

In the interview, Mr. Schiff said he hoped this year could yield a “resumption of normalcy” on the committee after a fraught four years. He said he had invited Republicans to work together on issues like improving intelligence work on China.

But on Thursday, there was little sign of any new comity.

Representative Devin Nunes of California, the top Republican on the committee, closed the hearing saying that anti-Republican partisanship in the intelligence community was becoming worse.

“I’ll tell you, half of America, Middle America, they don’t trust these agencies right now,” he said. “Republicans feel like they’ve been targeted. And you hear that every single day.”

“I take a very different view of the professionals within the I.C. and within the F.B.I., who I think are consummate professionals, and to whom we owe a tremendous debt of gratitude,” Mr. Schiff said, referring to the intelligence community. “Through these turbulent times they’ve kept their head down, they’ve done their work. They’ve helped keep the country safe.”

And then he gaveled the hearing to a close.

Liz Truss throws down gauntlet to Putin as war fears escalate: ‘No concessions!’

Opinion | ‘The 46th’: Will Georgia’s Races Change the Senate?