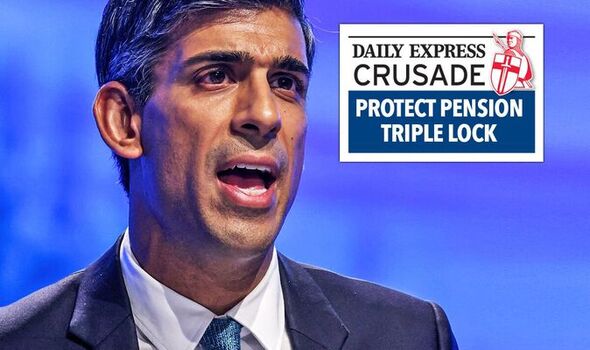 The Express is on the brink of a major victory this morning, with Prime Minister Rishi Sunak preparing to announce he will honour the state pension triple lock.

Hundreds of thousands of Britons have joined our crusade over the past week to demand the Government stick by the 2019 election manifesto pledge.

Chancellor Jeremy Hunt has sent the Government’s official spending watchdog, the Office of Budget Responsibility, his plans for the Autumn Budget later this month.

Last night reports emerged that sticking by the state pension triple lock and plans to increase benefits in line with inflation were among assumptions taken by the Treasury.

Mr Sunak threw the triple lock promise into doubt shortly after entering No10 when he refused to commit to sticking by the pledge.

The Prime Minister’s press secretary said Mr Sunak would “do what is right and compassionate” but would not give further details.

“I’m not getting into speculation on what is going to happen,” she added.

“A lot of these things have to be discussed with the Prime Minister and the Chancellor I’m not going to speculate on what is and isn’t going to be in the Budget.

“I’m not going to comment on what decisions are going to be made.

The triple lock guarantees state pensions will rise in line with inflation or wages or by 2.5 per cent, depending on which is the highest.

Mr Sunak suspended the triple lock for 12 months following the pandemic after the end of the furlough scheme led to average wages being artificially inflated.