WASHINGTON — Early last year, as Bernie Sanders was surging through the first Democratic presidential primary races, Representative James E. Clyburn of South Carolina, a kingmaker in his state, stepped in to endorse Joseph R. Biden Jr. before the primary there, helping vault the former vice president to the nomination.

On Tuesday, Mr. Clyburn, the No. 3 House Democrat, took aim at one of Mr. Sanders’s most outspoken acolytes, Nina Turner, a hero to the left who is surging in her campaign in Ohio to claim the Cleveland-based congressional seat vacated by the housing secretary, Marcia L. Fudge.

He said his decision to back Ms. Brown, the chairwoman of the Cuyahoga County Democratic Party, was not about Mr. Sanders, or even Ms. Turner, who remains the favorite before the contest on Aug. 3 in the heavily Democratic district. But he took a swipe at what he called the “sloganeering” of the party’s left flank, which has risen to power with calls for “Medicare for all,” and to “abolish ICE” and “defund the police.”

“What I try to do is demonstrate by precept and example how we are to proceed as a party,” Mr. Clyburn said in an interview. “When I spoke out against sloganeering, like ‘Burn, baby, burn’ in the 1960s and ‘defund the police,’ which I think is cutting the throats of the party, I know exactly where my constituents are. They are against that, and I’m against that.”

The special election in Cleveland is highlighting the vast generational divide and ideological gulf that the Democratic Party faces as the entire House leadership heads toward the sunset. Mr. Clyburn, Speaker Nancy Pelosi and the House majority leader, Representative Steny H. Hoyer, are all octogenarians, leading an increasingly youthful, diverse and restive caucus. All three have promised to vacate their positions after this Congress, and the next year will be an ideological battle over who will succeed them.

Ms. Brown has the backing of the Democratic establishment, including of not only Mr. Clyburn but also Hillary Clinton; Richard Cordray, a former Ohio attorney general; Representative Joyce Beatty of Ohio, the chairwoman of the Congressional Black Caucus; and moderate Democrats like Representatives Josh Gottheimer of New Jersey and David Trone of Maryland.

Ms. Turner, who has the endorsements of much of the House Progressive Caucus, including the so-called squad — Representatives Alexandria Ocasio-Cortez, Ayanna S. Pressley, Ilhan Omar and Rashida Tlaib — would be a strong new voice for the congressional left. And the left is increasingly focused on Black and Hispanic districts that they see as safe redoubts for ideological candidates.

“You can’t take any one race and paint it as some larger aggregate for the whole country,” Ms. Ocasio-Cortez, a New York Democrat, said on Tuesday. “But I do think that Nina is a beloved leader in the progressive movement, and the degree of excitement that she’s generated and grass-roots energy and organizing in her direction is a real testament to the asset that the base of our party can provide.”

Ms. Turner is undoubtedly a divisive figure as well. A prominent surrogate for Mr. Sanders in 2016 and a national co-chairwoman for his campaign in 2020, she has never minced words about what she calls “corporate Democrats.” She has declined to say whether she voted for Ms. Clinton in 2016, and before Election Day in November, she suggested the choice between Donald J. Trump and Mr. Biden was the choice between a full bowl of excrement and half a bowl. 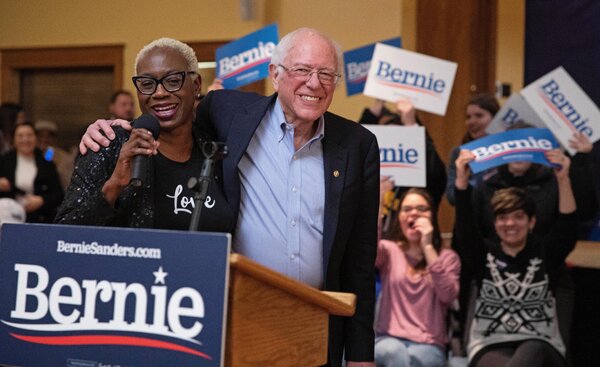 At an event last weekend, Ms. Turner sat beside the rapper Killer Mike, another supporter of Mr. Sanders, as he suggested that Mr. Clyburn sold out cheap to Mr. Biden, delivering his endorsement in exchange for making Juneteenth into a federal holiday.

“I think it’s incredibly stupid to not cut a deal before you get someone elected president, and the only thing you get is a federal holiday and nothing tangible out of it,” he said, as Ms. Turner approvingly interjected, “You better talk about it.”

To this day, some Democrats say Ms. Turner’s hostility cost Mrs. Clinton key votes on the left in the swing states that decided the 2016 election.

In an interview Tuesday, Ms. Turner blanched at any notion of disloyalty to the party for which she has served as a Cleveland city councilwoman, a state senator, the Democratic nominee for secretary of state, and a two-time convention delegate for Barack Obama, when Mr. Biden shared his ticket.

“I wish people were more concerned about the suffering that I have enumerated than the colorful words that I have used,” she said.

Mr. Clyburn said “colorful words” did not factor in his endorsement, though in an advertisement to begin running on Wednesday, he listed the names of past Black members of Congress who represented Ohio and said they had been effective “because they focused on you, not on themselves.”

Both Ms. Turner and Ms. Brown are Black, as is Ms. Fudge, whom Mr. Clyburn aggressively promoted to lead the Agriculture Department before Mr. Biden selected her as housing secretary.

“As the leader of this party, I am truly skilled in building bridges and doing it without attacking people or insulting them,” she said Tuesday. If sent to Washington, she added, “I won’t have to start with a long letter of apology.”

Ms. Turner has a ready answer for that, pointing to the blistering attack Kamala Harris, then a senator, directed at Mr. Biden during one of the presidential debates, when she said his policies had exacerbated racial injustice.

“If those two can be side by side now, then surely the president and I can come together,” she said, though she added that her campaign is “not about loyalty to any one person.”

She has been trying to make amends, commending the Biden administration for its pandemic response, its huge coronavirus aid package and its social policy proposals, while saying Democrats need to go further — on student debt forgiveness, a $15-an-hour minimum wage and climate change,

And ultimately, ideology, not style, is the biggest issue confronting the Democratic Party.

“These generational shifts are absolutely a theme throughout the caucus across a lot of different issues,” Ms. Ocasio-Cortez said. “That’s why I think Nina’s groundswell is exciting, because it’s not any one person’s endorsement. It’s really the sum of everything that we’ve seen.”

All Out Politics podcast: Football and politics collide amid Euro 2020 excitement