WASHINGTON — Federal law enforcement officials vowed on Tuesday to accelerate a nationwide manhunt for hundreds of people who committed serious crimes during last week’s assault on the Capitol, even as new evidence surfaced that the F.B.I., police and White House were warned of potential violence that day.

Michael R. Sherwin, the acting U.S. attorney in Washington, called the investigation into the attack on the Capitol “unmatched” in scope and said it had already resulted in more than 170 cases involving 100,000 digital tips. He pledged that prosecutors could file charges of seditious conspiracy, murder and other serious felonies in the weeks ahead.

“The Capitol grounds outside and inside are essentially a crime scene,” Mr. Sherwin said during a news conference in Washington, adding that “we have literally thousands of potential witnesses” around the country.

His remarks came as evidence mounted that before the grim events at the Capitol — in which lawmakers and others hid from an angry, surging mob and five people died in the riot and nearby tumult — top officials in government had reason to be deeply concerned about the possibility of violence. The indications included a pair of F.B.I. reports that warned of war and blowing up a building at a Midwest statehouse, and a White House meeting where President Trump and top military officials discussed deploying the National Guard.

In one case, F.B.I. officials acknowledged that agents in Virginia warned a day earlier about a threat of violent attacks aimed at lawmakers at the Capitol. The warning, which officials said was shared with police and others in Washington, D.C., included reports of violent language, mentioned people sharing a map of tunnels and quoted from an online thread in which people said those attending the protests should be “ready for war,” according to The Washington Post, which first reported on the F.B.I. document.

In a separate report, the F.B.I.’s office in Minneapolis issued a bulletin late last month about rallies the so-called boogaloo movement planned to hold across the country on Jan. 17, law enforcement officials said. Members of the movement, an extremist ideology that seeks to bring about a second civil war to overthrow the government, discussed blowing up a building in that state’s capitol and a willingness to die for their cause, according to Yahoo News, which obtained a copy of the report.

The existence of the two reports raised questions about whether Mr. Trump, who had urged his supporters to gather in Washington on Jan. 6, or other White House officials were aware of the threats of violence in the days before the president urged his supporters at a rally to go to the Capitol to “fight” against the certification of the 2020 election.

“We will never give up. We will never concede,” Mr. Trump told thousands of his supporters just before many of them breached barriers, assaulted officers and stormed through the halls of the House and Senate. 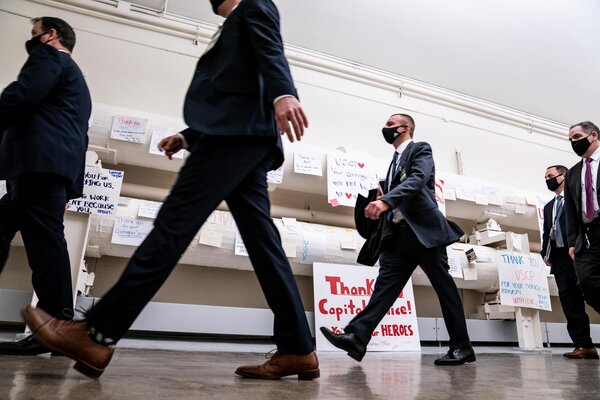 In the week before the event, Mr. Trump had initially expressed support for using National Guard troops for what he told aides that he expected: agitation by left-wing Antifa activists during the gathering. He did not ask the Defense Department directly, people familiar with his conversations said.

On the Sunday before the attack, top military officials, including Christopher C. Miller, the acting secretary of defense, and Gen. Mark A. Milley, the chairman of the Joint Chiefs of Staff, briefed Robert C. O’Brien, the president’s national security adviser, and later met with Mr. Trump. The president “concurred” with the plan to deploy hundreds of unarmed National Guard troops agreed to by the Defense Department, the U.S. Capitol Police and the office of Mayor Muriel Bowser of Washington.

Mr. Trump essentially told the group to “do whatever you need to do,” according to people familiar with the meeting.

In the days before the riot, a law enforcement official expressed concern during a call with another government official that the biggest worries included left-wing agitators or supporters of President-elect Joseph R. Biden Jr. might clash with Mr. Trump’s supporters. There was no mention of a possibility that anyone might try to assault the Capitol, a person familiar with the call said.

The law enforcement official said that the F.B.I. knew of 82 groups that planned to protest, based on their registrations with the U.S. Park Police, and that Ms. Bowser had requested a National Guard contingent of several hundred troops but that they would be unarmed.

One White House official said the most obvious sign that law enforcement agencies saw no legitimate threat to the Capitol was the fact that Vice President Mike Pence traveled there to preside over the certification. If the F.B.I. or Justice Department officials thought there was a real possibility of an assault on the building, the Secret Service never would have allowed that, the official noted.

But the F.B.I. reports and the official briefings at the White House were not the only warning that some of Mr. Trump’s supporters intended to do more in Washington than simply protest.

Online commentary about attacking the Capitol appeared quickly after Mr. Trump tweeted on Dec. 19 urging his supporters to rally against certification of the election results. “Big protest in D.C. on January 6th. Be there, will be wild!” he wrote.

People quickly seized on his tweet as an indication that the president wanted his supporters to take violent action, according to SITE, a private group that monitors terrorism threats around the world. On one website, a person suggested that “‘Will Be Wild’ is a hidden message for us to be prepared — as in armed.” Another said, “That’s kind of how I took it.”

It is unclear whether Mr. Trump was aware of the online conversation about his tweet, though Dan Scavino, his director of social media, is known to keep the president updated on what his supporters are saying online. For weeks leading up to the attack, people openly discussed taking violent action against the Capitol and the lawmakers meeting inside to certify the results of the election, according to SITE.

One user wrote that “if congress votes against the true will of the people, in the face of all the evidence of fraud and corruption, then yes, start marching INTO THE CHAMBERS.”

Many of the online messages directly threatened the welfare of members of Congress.

“The objective is Congress,” one wrote, adding that after taking control of the Capitol, Trump supporters should make sure that people inside “leave in one of two ways: dead or certifying Trump the rightful winner.”

On the morning of Jan. 6, Mr. Trump and other speakers used charged language to whip up the crowd. Rudolph W. Giuliani, the president’s personal lawyer, called for “trial by combat” and Mr. Trump was greeted by cheers of “Fight for Trump! Fight for Trump!” when he spoke.

“You’ll never take back our country with weakness,” he said after urging the crowd to head to the Capitol. “You have to show strength, and you have to be strong.”

Steven M. D’Antuono, the head of the F.B.I.’s Washington Field Office, defended the bureau at Tuesday’s news conference, saying that the warning from Virginia was quickly shared with other law enforcement agencies and emphasizing that the information came from a single thread on a message board and was not attributable to anyone. Another law enforcement official said it was uncorroborated.

From Riot to Impeachment

The riot inside the U.S. Capitol on Wednesday, Jan. 6, followed a rally at which President Trump made an inflammatory speech to his supporters, questioning the results of the election. Here’s a look at what happened and at the ongoing fallout: