LAKE MARY, Fla. — Long before the F.B.I. began to scrutinize a tax collector in Florida named Joel Greenberg — and long before his trail led them to Representative Matt Gaetz — he amassed an outlandish record in the mundane local public office he had turned into a personal fief of power.

Records and interviews detailed a litany of accusations: Mr. Greenberg strutted into work with a pistol on his hip in a state that does not allow guns to be openly carried. He spent hundreds of thousands of taxpayer dollars to create no-show jobs for a relative and some of his groomsmen. He tried to talk his way out of a traffic ticket, asking a police officer for “professional courtesy.” He played police officer himself, putting a flashing light on his car to pull over a woman and accuse her of speeding. He published an anti-Muslim Facebook post. He solicited help to hack critics on the county commission.

Stalking a rival candidate got him arrested. Federal agents looking into the matter found at least five fake IDs in his wallet and backpack, and kept digging.

Their inquiry culminated in 33 federal charges against Mr. Greenberg, 36, including sex trafficking of a minor, bribery, fraud and stalking — and led to a mushrooming political scandal that burst into national news in recent days and ensnared Mr. Gaetz, who is a close ally of President Donald J. Trump, and other influential Florida Republicans, with the investigation continuing.

Though the sex trafficking charge against Mr. Greenberg and the ensuing Justice Department examination into Mr. Gaetz — including whether he had sex with the same 17-year-old girl — have received the most attention, the array of schemes that Mr. Greenberg is suspected of are broader and altogether show an astonishing disregard for the law by an elected official.

Interviews with people in Seminole County who dealt with Mr. Greenberg and a review of news articles and public records from his past suggest that he went from being a wealthy but troubled teenager who drifted through young adulthood before turning to local politics five years ago and embracing Trumpism.

He quickly built relationships with Mr. Gaetz, 38, whom he had met in political circles that also included Chris Dorworth, 44, a real estate developer and lobbyist for Ballard Partners, a powerful firm that had close ties to the Trump administration. (Mr. Greenberg hired Ballard in 2017 to lobby for the tax collector’s office.) Mr. Dorworth announced on Friday that he had resigned from the firm.

Mr. Greenberg relished hobnobbing with the well-connected: He spoke at a Trump campaign rally in 2016 and was invited to the White House three years later.

But he also appeared to ingratiate himself with Mr. Gaetz and others more privately as well: by soliciting women for sex on their behalf, sometimes in Ecstasy-fueled encounters, people familiar with the arrangements have said. Mr. Gaetz has broadly denied allegations against him, including paying for sex or having sex with a minor.

In the end, Mr. Greenberg went from being an outsider elected on an anticorruption platform to, prosecutors say, becoming corrupted himself. The world he built quickly fell apart when he was first indicted in June. He resigned and dropped his bid for re-election. Within days, one of the women crashed a vehicle into a tree near Mr. Greenberg’s house, suffering minor injuries, according to a police report of the crash, which has not been previously reported.

And indications in court last week that he plans to plead guilty, suggesting he will cooperate with prosecutors, further prompted former friends to abandon him. “No one wants to talk to me anymore,” Mr. Greenberg told The Orlando Sentinel in the fall.

Mr. Greenberg’s lawyer, Fritz Scheller, declined to make his client, who has been in jail since March for violating terms of his bail, available for a jailhouse interview.

Mr. Greenberg acted unlike any other tax collector in Florida. His small-time position left him dissatisfied. His friendships gave him a taste of greater power. He tested the boundaries of what he could get away with, until it all imploded.

Daniel A. Pérez, a lawyer who represented one of Mr. Greenberg’s former employees in a labor dispute, likened the disreputable saga to a Netflix series: “It’s like the Tiger King got elected tax collector.” 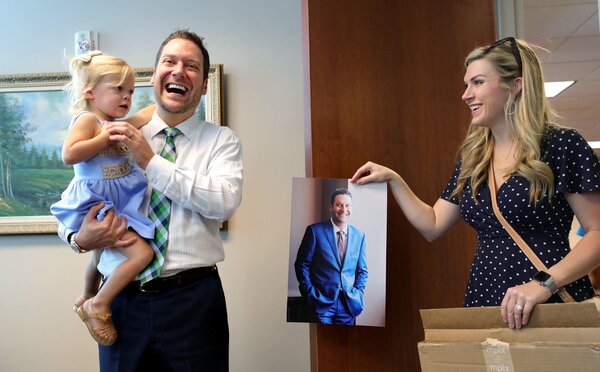 He was not expected to win.

The previous tax collector, Ray Valdes, a Republican, had been in office for 28 years. But Mr. Valdes had been accused of ethical misconduct, and Mr. Greenberg, a newcomer, saw an opening. He raised five times as much money for a primary challenge, almost all self-funded — his father founded an empire of dental offices — and ousted the incumbent.

Mr. Greenberg had little record to run on. He campaigned as a small-business owner, with an advertising company named DG3 Network registered to his name. He had hosted a daily afternoon sports-talk AM radio show. He was 31 and had recently married Abby Weldgen, a real-estate agent.

Mr. Greenberg attended evening classes at Rollins College between 2005 and 2012 but never graduated, according to the school. His name appeared on a burglary incident report when he was 18 and on an involuntary psychiatric commitment report when he was 21, but both reports were sealed, according to records unearthed in 2016 by WFTV, a local news station. Mr. Greenberg declined to speak to the station about them.

When Mr. Greenberg was 15, he and his mother, Susan Greenberg, told a sports columnist for The Sentinel that he had benefited from the mentorship of an Orlando Magic basketball player, John Amaechi, who sometimes shot hoops with “wayward” teenage boys.

Ms. Greenberg told The Sentinel that her son had been diagnosed with attention deficit disorder as a toddler, took medication as a child and developed Tourette’s syndrome. “Joel is my shining star that needs more polishing, more buffing,” she said. “He’s the one who keeps me on my knees. It was a belligerent, defiant, rebellion-type of thing at home.”

Mr. Greenberg’s parents sent him to the Florida Air Academy in Melbourne for military-style discipline, but “I guess it just didn’t sink in,” young Joel told The Sentinel.

Asked what he would like to be one day, he answered, “I want to be a good person.”

Being elected tax collector could have offered Mr. Greenberg a stable, if low-profile, career in government. But he had run as a reformer and appeared to bask in the trappings of his new role. Two months after winning the Republican primary in August 2016 — effectively clinching the office, since no Democrat was on the ballot — he made the speaking lineup at a Trump rally in Sanford, Fla., bounding onto the airport tarmac stage in sunglasses before Mr. Trump arrived.

“The media has tried to destroy a good man’s reputation,” he said of Mr. Trump, “and in destroying that, they would destroy that which he represents: the ideas that you and I hold dear in our hearts, that we know is right and true.”

By June 2017, Mr. Gaetz floated the idea to a Tampa radio station that Mr. Greenberg could run for Congress. He called him a “disrupter” who had taken the tax collector’s office “by storm.”

A few months into office, Mr. Greenberg was, according to an employee and others in his orbit, already bored.

Four complaints about his actions as tax collector were made to the Florida Department of Law Enforcement from August 2017 to August 2018, including accusations that he had asked a contractor to hack the county’s computers, department records show.

He pulled over a woman in 2017 while wearing shorts, a backward baseball cap and his tax collector’s badge around his neck. She said he had yelled at her for supposedly cutting him off and driving “like a bat out of hell,” according to a complaint she filed to the sheriff’s office.

News reports alleged financial mismanagement. A county audit concluded that Mr. Greenberg had “wasted” more than $1 million in taxpayer money and used his tax collector credit card to purchase body armor, weapons and a drone. By the end of his tenure, his office — in top-shelf space he leased — was strewn with electronics, one person who saw it said. A poorly installed server to allow for cryptocurrency payments to the tax collector’s office was blamed for a fire this year.

What ultimately got Mr. Greenberg into trouble — as so often happens in Florida — began with a clash over real estate.

His friend Mr. Dorworth wanted to build a shopping and residential complex on rural lands in eastern Seminole County. But an opposition group defeated the project in 2018, and eventually its leader, a music teacher named Brian A. Beute, decided he wanted to go beyond activism and run for office, filing a 2020 candidacy against Mr. Greenberg.

Boris Johnson POLL: As PM celebrates one year in No10, has he done a good job?