Pollsters and bookmakers predict the Labour leader will lose his first electoral test at the Hartlepool by-election. The seat was one of the few the opposition clung on to under Jeremy Corbyn when Boris Johnson smashed through the so-called Red Wall in 2019. But polling carried out by Survation for the Communication Workers Union puts the Tory candidate Jill Mortimer seven points ahead of Labour’s Paul Williams.

It would be the first time Hartlepool elected a Conservative MP since 1959.

Sir Keir has struggled to make a breakthrough during his first year as leader.

CWU leader Dave Ward said working-class voters shrug their shoulders and ask “Who are you then?” of Starmer after a year in which he “obsessed over telling people he isn’t Jeremy Corbyn”.

The union baron took a swipe at Sir Keir’s attempts to show Labour is patriotic, claiming voters would not be won over “by a bit of flag-waving here and there”.

He added: “They want a real offer and won’t get fooled again by those who pursue power without principle.”

The telephone poll put Ms Mortimer on 49 per cent, up 20 points on the Conservative Party’s share in the seat at the general election when the Brexit Party scooped 10,600 votes. 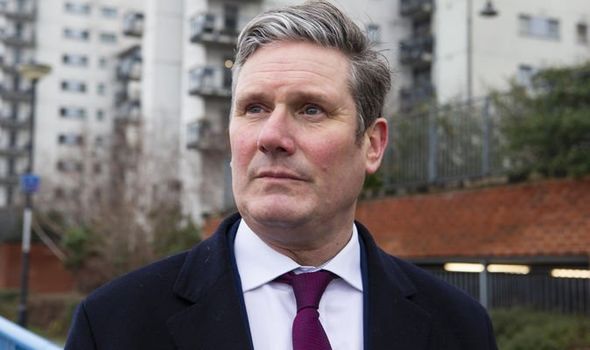 Mr Williams is on 42 per cent, up only four points on Labour’s 2019 vote. Bookmaker Coral put the Conservative Party odds on at 4-7 following the poll.

The by-election was triggered after the sitting MP Mike Hill resigned in March.

He was suspended by Labour in September 2019 over allegations he sexually harassed a woman, but had the whip restored to contest the general election two months later. He denies the allegations.

Voters will choose his successor on May 6 as millions also head out to cast their votes in local and mayoral elections for the first time since the pandemic, a wider electoral test for Sir Keir. Electors in Scotland and Wales will be choosing new parliaments.