House Republicans purged Representative Liz Cheney of Wyoming from their leadership ranks on Wednesday, voting to oust their No. 3 for her refusal to stay quiet about Donald J. Trump’s election lies, in a remarkable takedown of one of their own that reflected the party’s intolerance for dissent and unswerving fealty to the former president.

The action came by voice vote during a brief but raucous closed-door meeting in an auditorium on Capitol Hill on Wednesday morning, after Ms. Cheney made a defiant final speech that drew boos from her colleagues.

In her parting remarks, Ms. Cheney urged Republicans not to “let the former president drag us backward,” according to a person familiar with the private comments who detailed them on condition of anonymity. Ms. Cheney warned that Republicans were going down a path that would bring their “destruction,” and “possibly the destruction of our country,” the person said, adding that if the party wanted a leader who would “enable and spread his destructive lies,” they should vote to remove her.

Republicans did just that, after greeting her speech with boos, according two people present, speaking on the condition on anonymity to discuss an internal discussion. They ultimately opted not to hold a recorded vote, after Representative Kevin McCarthy of California, the Republican leader, said that they should vote by voice to show unity.

Emerging from the meeting, Ms. Cheney remained unremorseful, and said she was committed to doing “everything I can to ensure that the former president never again gets near the Oval Office.”

“We must go forward based on truth,” Ms. Cheney told reporters. “We cannot both embrace the big lie and embrace the Constitution.”

The action came the day after Ms. Cheney had delivered a broadside on the House floor against Mr. Trump and the party leaders working to oust her, accusing them of being complicit in undermining the democratic system.

In a scathing speech, Ms. Cheney said that the country was facing a “never seen before” threat of a former president who provoked the Capitol attack on Jan. 6 and who had “resumed his aggressive effort to convince Americans that the election was stolen from him.”

“Remaining silent and ignoring the lie emboldens the liar,” she said. “I will not participate in that. I will not sit back and watch in silence while others lead our party down a path that abandons the rule of law and joins the former president’s crusade to undermine our democracy.”

Mr. Trump weighed in on Wednesday morning as lawmakers were gathering to force Ms. Cheney out, saying he was looking forward to the ouster of a woman he called “a poor leader, a major Democrat talking point, a warmonger, and a person with absolutely no personality or heart.” 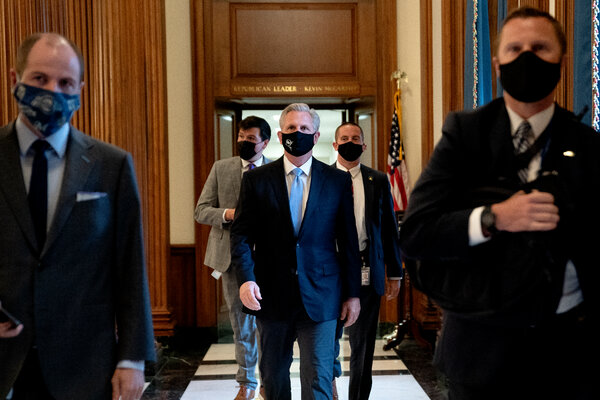 Top Republicans have labored to avoid talking about the Capitol riot and have painted Ms. Cheney’s removal as a forward-looking move that would allow them to move past that day.

Instead, the episode has only called attention to the party’s slavish devotion to Mr. Trump, its tolerance for authoritarianism, and internal divisions between more mainstream and conservative factions about how to win back the House in 2022. All of those dynamics threaten to alienate independent and suburban voters, thus undercutting what otherwise appears to be a sterling opportunity for Republicans to reclaim the majority.

As a replacement for Ms. Cheney, Republican leaders have united behind Representative Elise Stefanik of New York, a onetime moderate whose loyalty to Mr. Trump and backing for his false claims of election fraud have earned her broad support from the party’s rank and file that Ms. Cheney, a lifelong conservative, no longer commands.

If Ms. Stefanik is elected this week to replace Ms. Cheney, as expected, the top three House Republican leadership posts will be held by lawmakers who voted not to certify President Biden’s victory in January. In recent days, however, some hard-right Republicans have attacked Ms. Stefanik as insufficiently conservative and suggested the party should consider someone else.

Cooking the Books podcast: How to check and fix your credit score

‘Springsteen on Broadway’ is coming back, but not for guests who can’t prove F.D.A.-approved vaccinations.