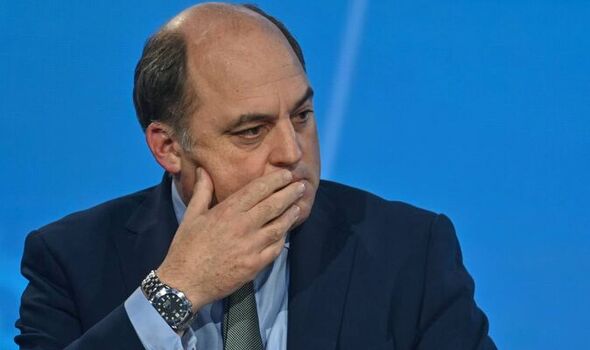 Defence Secretary Ben Wallace and the head of the armed forces Admiral Sir Tony Radakin had hoped for a cash injection following a pledge by Liz Truss to raise defence spending to 3 percent of GDP- a rise of £157bn – by 2030. But under new Chancellor Jeremy Hunt has been tasked with saving £41 billion from the public sector budget as the country returns to austerity spending in order to balance the books.

Though PM RIshi Sunak has pledged to “spend whatever is necessary to keep the country safe”, Whitehall sources also night said several “critical” projects were facing the axe.

One proposal is to “scale back” Royal Navy, RAF and Army military exercises to save on fuel costs. Next year’s deployment of the carrier task force to the Indo-Pacific has been scrapped to save £450m, sources say.

For the army, steps may include pausing the replacement of the 1990s Bowman radio system with a much needed £3.2bn Morpheus upgrade, which will use AI to allow soldiers to better read the environment, “increase operational tempo and optimise battle-winning capabilities”.

In addition, the purchase of the US-made Joint Light Tactical Vehicle (JLTV) will be delayed or abandoned and the number of Boxer personnel carriers cut, though the problematic Ajax fighting vehicle – which has already cost £2.5bn for 26 which are regarded as unsafe, will continue at a cost of a further £100m.

And hoped-for U-turn on the decision to cut the size of the British Army to 72,500 soldiers, the smallest since 1714, is also not happening now.

The RAF and Royal Navy are also in the frame, with a cut in funding for the new Tempest combat aircraft project- supposedly coming into service from 2035 – and in the number of new Type 32 frigates.

Last night Gen Sir Richard Barrons, who led Joint Force Command until 2016, warned that the days when the UK could afford to sacrifice defence budgets at the altar of other public spending are over.

”The Royal Navy already cannot carry out both European and Indo-Pacific commitments, and it is only a matter of time before Chinese ships appear in the Atlantic as they negotiate the melting of the NorthWest passage,’ he said.

“And the February 24 invasion showed us that we are on a confrontation course with Russia over Ukraine, and the Army is core to that confrontation.

“Defence is as important as Social Security, which commands six times its budget.

“Making the army smaller and kicking modernisation down the road while it retains 1990s technology is playing with fire.  It does not fit in with the lesson of  Ukraine. By the time we catch up, it may simply be too late. “

Biden to meet with community leaders in Delaware amid U.S. police-brutality protests