In a furious tirade, the GB News presenter blasted the First Minister, claiming she “doesn’t care” about the Scots and had a “shameful” record in government. Mr Wootton tore into Ms Sturgeon, arguing that a second referendum would be “illegal” and that the SNP leader only cares about her “craven” nationalist base.

He said: “Scheming Sturgeon proved once and for all today that she doesn’t care about what Scots want, or turning around Scotland’s failing health system or cutting her shameful record drug deaths.

“She doesn’t stick to her word given the on the record pledge that the 2014 independence referendum would be a once in a generation vote.

“She also doesn’t give two hoots about the law of the land by announcing plans for a second independence referendum next October.

“Sturgeon proved she only cares about one thing – maintaining the support of her craven SNP base. 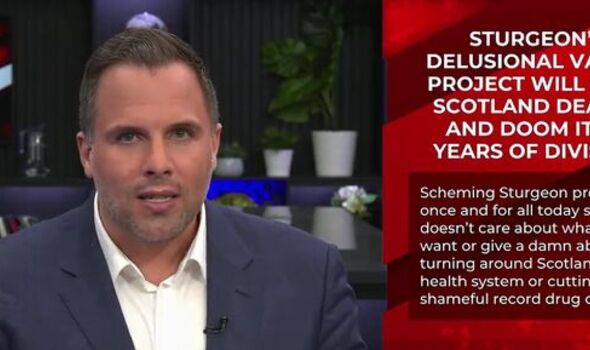 “This delusional vanity project is going to impose a heavy financial and social cost on Scotland, and will not help bring Scotland together.

“It’s a plan that she knows won’t lead to a vote but rather years of further division.

“But she only cares about herself and her own career. She went ahead anyway.”

Mr Wootton then played a short clip of Ms Sturgeon announcing her plans for a second referendum in the Scottish Parliament claiming that she had a democratic mandate to do so.

Mr Wootton exploded with fury at this suggestion describing the First Minister’s comments as a “litany of lies” and “rubbish.”

He said: “The litany of lies there is just off the scale. Sturgeon doesn’t have a democratic mandate for a second referendum. What total rubbish.

“During the last election Sturgeon actively encouraged those who supported the union to vote for her anyway.

“Because she promised she was going to focus on Covid recovery.

“Even then by the way she didn’t secure an SNP majority. She’s had to be propped up by green extremists.

“In fact the polls show waning support for another divisive and costly referendum in Scotland.

“As a result the Scottish Tory leader Douglas Ross was completely right today when he pledged his party will not take part in a pretend poll.”

‘Question is, is it right?’ Miliband shames Sunak’s wife for ‘sheltering part of income’

COVID-19: Most restrictions to end in England next week – but face masks and ‘passports’ encouraged, government confirms