The experience was so demeaning that Susie Angel did not vote again for two decades.

It was 1991, she recalled, and she was a 21-year-old learning to live independently with cerebral palsy, which she has had since birth. She waited in line at her polling place in Austin, Texas, for hours. Then she waited for a poll worker who could help her complete her ballot. Finally, the worker refused to take her aside, making her name her preferred candidates in full view and earshot of other voters.

Ms. Angel, who has limited use of her limbs and a speech impairment and uses a foot-operated power wheelchair, left understanding that, unlike other Americans, she couldn’t vote privately. It was only when she began working for the Coalition of Texans With Disabilities in 2010, and learned about the adaptive equipment available to her, that she was able to vote independently — an experience that brought her to tears.

Now, Ms. Angel is watching the Texas Legislature pursue sweeping voting restrictions, afraid that she and others with disabilities might again be deterred from voting.

“They’re really making it so we don’t have a voice anymore,” she said. “And without that, we can’t get the things that we need to survive.”

The Texas legislation, which Democrats blocked but Republicans plan to revive in a special session, is one of a series of Republican voting bills that would disproportionately affect people with disabilities. The Wisconsin Senate approved three last week with more to come, though unlike in Texas, the governor there is a Democrat and is expected to veto them. Georgia and Florida have enacted similar measures.

For years, advocates have worked to mobilize Americans with disabilities — more than 38 million of whom are eligible to vote, according to researchers at Rutgers University — into a voting bloc powerful enough to demand that politicians address their needs. Now, after an election in which mail-in voting helped them turn out in large numbers, the restrictive proposals are simultaneously threatening their rights and testing their nascent political influence.

“It’s only been the last few years that there have been studies done showing that if candidates would appeal to issues that the disability community cares about, there is such a thing as the disability vote,” said Bob Kafka, an organizer with Rev Up Texas, which aims to increase turnout among disabled Texans. “That’s why you’re seeing it playing out in Georgia and here and other places where the disability community is part of the larger fight against voter suppression.”

The fight also underscores the degree to which disability rights, once championed both by Democrats like former Senator Tom Harkin of Iowa and Republicans like former Senator Bob Dole of Kansas, have become one more partisan football, even though there are millions of disabled voters in both parties.

The most recent version of the Texas bill would ban drive-through voting, further limit absentee voting in a state that already has strict eligibility rules, and let poll watchers record video of voters as purported evidence of wrongdoing. Disability rights advocates worry that partisan poll watchers will misinterpret legal accommodations — like a worker helping a disabled voter complete a ballot, or a blind voter using a screen reader — as fraud.

Bills in Wisconsin would restrict who could return voters’ ballots on their behalf; weaken accommodations for “indefinitely confined” voters, who cannot vote in person because of age, illness or disability; and forbid municipal clerks to correct small mistakes on ballot envelopes.

Voters who needed help returning their ballot would have to get it from an immediate family member or legal guardian if they had one in Wisconsin, regardless of distance. If a disabled voter in Milwaukee had a sibling in Ashland, 350 miles away, it would be illegal to rely on a neighbor. People with no family in the state could designate someone else, but no individual could return more than one non-relative’s ballot.

Stephanie Birmingham of Sturgeon Bay, Wis., who has the bone disorder osteogenesis imperfecta and uses a wheelchair, said the bill seemed to assume “that people with disabilities have good relationships with their family, if they even do have family around,” and that family members were less likely than others to commit fraud.

Breaking these rules would be a felony — a characteristic of bills in several states that advocates said could discourage people from helping friends or neighbors.

“It’s made organizations like ours start questioning, ‘Should we do that?’ because a simple mistake on our end could put them in jeopardy and our organization in jeopardy,” said Chase Bearden, deputy executive director of the Coalition of Texans With Disabilities. “That’s a pretty chilling effect.” 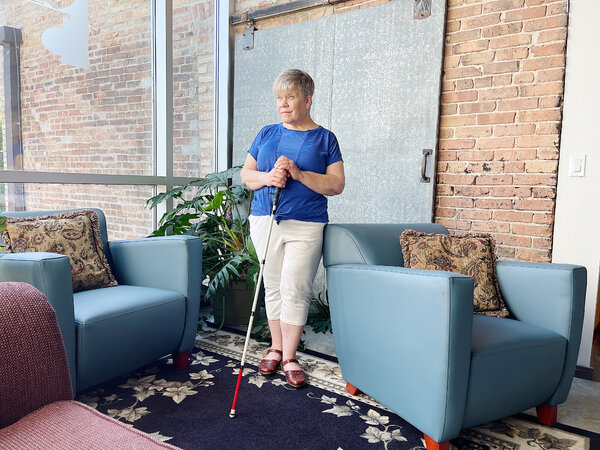 A spokesman for State Senator Bryan Hughes, the lead author of the Texas legislation, did not immediately respond to a request for comment. State Senator Duey Stroebel of Wisconsin, who is sponsoring some of the bills there, called them “a reasonable balancing of priorities.”

“I want to ensure that self-certifying as indefinitely confined is not a de facto workaround to election integrity measures already on the books,” Mr. Stroebel said, adding of the limits on who could return ballots: “Any current practice for an individual who is not engaging in orchestrated mass ballot harvesting should be allowed by our bill. Also, a voter can simply return the ballot by mail.”

Another measure in Wisconsin would require anyone under 65 who applied for indefinitely confined status to provide a doctor’s note. Republicans say this — along with a photo ID requirement — would prevent people from claiming the status fraudulently, and have pointed to the Milwaukee and Dane County clerks’ statements early last year that, because of a statewide stay-at-home order, any voter could claim it. After the Wisconsin Supreme Court ordered them to stop, the clerks rescinded that advice. The court later affirmed that individual voters could decide whether they qualified for the status.

According to the Wisconsin Elections Commission, 80 percent of people who claimed the status last year had ID on file.

Disabled voters expressed concern that, beyond the difficulty of finding transportation to appointments, the measure would require doctors to attest to matters outside their scope of practice — and that insurers might refuse to cover office visits to obtain such notes, deeming them medically unnecessary.

Denise Jess, the executive director of the Wisconsin Council of the Blind and Visually Impaired, said she worried that her doctor wouldn’t even be willing to make an assessment about her ability to travel to a polling place.

Ms. Jess, who is blind, prefers to vote in person because polling places have accessible equipment for visually impaired voters to complete ballots independently. But at some point, she said, it might become impossible for her to travel safely, in which case she would have to find someone she trusts to mark her absentee ballot, and then find a legally acceptable person to return it.

Lobbying from disability rights groups has had some impact: A doctor’s note requirement was removed from the Texas legislation, for instance. At the same time, some disabled voters have found it difficult to even express their opposition.

In Georgia and Florida, some who wanted to speak at public hearings couldn’t because they were at high risk from the coronavirus. Olivia Babis, a senior public policy analyst at Disability Rights Florida, said one voter had attended a hearing but, because of a speech impediment, struggled to make her points in the allotted 60 seconds.

Both states’ bills passed but face legal challenges. Last month, three disability rights groups joined a lawsuit arguing that Georgia’s law violated the Americans With Disabilities Act in addition to, as the original plaintiffs alleged, the Constitution and the Voting Rights Act of 1965.

Ms. Babis expressed particular concern about Florida’s new rules on absentee ballot applications (people must apply every election cycle instead of every two, a significant obstacle because many counties’ websites are inaccessible to people with disabilities) and signature matching (partisan poll watchers can inspect ballot envelopes, including signatures).

“People with disabilities are disproportionately affected by signature matching as it stands anywhere,” Ms. Babis said, noting that visual impairments, brain injuries and other disabilities can prevent people from signing their name consistently. “Now we’re throwing more people in to potentially challenge signatures, who don’t necessarily have expertise in handwriting analysis.”

The Georgia law replaced signature matching with a requirement that absentee voters submit the number from a state ID, which poses its own obstacles for disabled voters who don’t have a driver’s license and cannot easily get to an office to obtain an ID. Similar challenges could arise under a bill that would extend Wisconsin’s photo ID requirement to include “indefinitely confined” voters, who have difficulties traveling.

When Wisconsin legislators enacted the photo ID requirement, “they maintained this exception for indefinitely confined voters,” said Barbara Beckert, Disability Rights Wisconsin’s Milwaukee office director. “There was a reason for that, and that reason hasn’t changed.”

Advocates like Ms. Beckert and Kyle Kleist, executive director of the Center for Independent Living for Western Wisconsin, said they had worked with State Senator Kathy Bernier, a Republican who leads the Senate Elections Committee and broke with her party this month when she voted against advancing three bills because of their effects on people with disabilities.

Ms. Bernier’s opposition denied the bills a majority on the elections committee, but the full Senate approved them anyway. (Only one other Republican, Ron Cowles, cast a “no” vote.) They now go to the State Assembly, which is also Republican-controlled.

And while some Republicans there have been “receptive to acknowledging what the barriers are,” Mr. Kleist said, “still they’re pushing forward full steam ahead.”

Texas Republicans are also undeterred; they have vowed to pass their bill over all opposition, and Gov. Greg Abbott, who is himself disabled, is expected to sign it.

“It is discouraging,” said Kenneth Semien, an activist with the Coalition of Texans With Disabilities and the American Council of the Blind of Texas. “But I know advocacy will continue for the rest of our lives.”

New York City marks a year since its first virus death with a virtual memorial tonight.