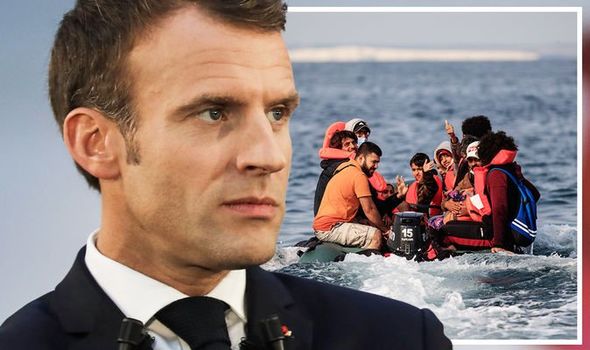 Some 30 vessels made the perilous crossing on Saturday despite attempts to make the route unviable. The arrivals tally eclipses the previous daily record of 592 people set less than two weeks ago.

Britain has given around £80 million in funding to France to clamp down on the crossings since last November.

But the government was told an “urgent” rethink is needed to stop the increasing levels of crossings.

Conservative MP Natalie Elphicke, who represents Dover and Deal, said: “It increasingly looks like the French have lost control of their side of the border.

“An urgent, fresh approach is needed for the British and French to work together to stop boats leaving in the first place, turn them around and make returns.

“With the crisis in Afghanistan, it’s more important than ever that these illegal routes are closed down and safe, legal, routes prioritised.

“We cannot risk a return of the squalid and dangerous camps of Sangatte and the Calais Jungle.”

Baroness Hoey said of the people making the crossings that “most of them are not asylum seekers”.

With the crisis in Afghanistan, it’s more important than ever that these illegal routes are closed down and safe, legal, routes prioritised

“France, clearly, is not being very supportive of what we want to do despite getting lots of money from us.

“You just wonder why on earth are we paying them all those millions because it’s clearly not making a difference.”

The government is increasing prison sentences for those who attempt to enter the country illegally to four years.

It is also changing the law so the people traffickers behind the journeys face life behind bars.

Dan O’Mahoney, Clandestine Channel Threat Commander, said: “These dangerous crossings from safe EU countries are completely unnecessary and we are determined to take down the evil criminal gangs behind them.

“We’re working across Government as well as with French and international partners to tackle this issue. We have doubled the number of police officers on French beaches, prevented more than 10,000 attempts, secured nearly 300 arrests and 65 prosecutions.”

Earlier this month, a 27-year-old man from Eritrea died after he and four other people jumped overboard as their boat started to sink in the English Channel.

“Refugees will continue to come to the UK, as they have for centuries, as long as there are despots, wars and persecution in this world,” she said.

“To end the use of small boats, MPs should create a humanitarian visa system for people in France who are travelling to the UK so they can arrive here in safety and with dignity to make their claims.”

MPs to get inflation-busting pay rise of almost £2,500 next month