President Biden will go down in history, fairly or unfairly, as the president who presided over a humiliating final act in the American experiment in Afghanistan. 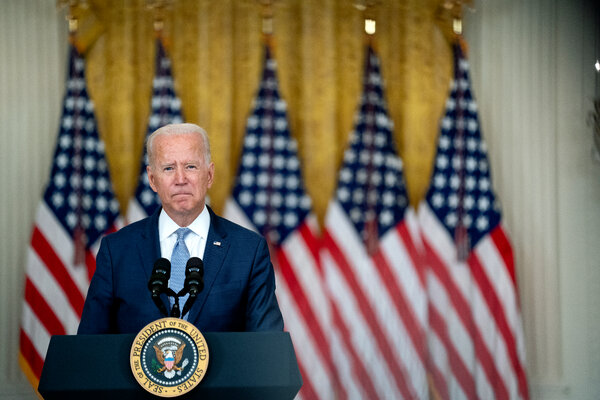 Rarely in modern presidential history have words come back to bite an American commander in chief as swiftly as these from President Biden a little more than five weeks ago: “There’s going to be no circumstance where you see people being lifted off the roof of an embassy of the United States in Afghanistan.”

Then, digging the hole deeper, he added, “The likelihood there’s going to be the Taliban overrunning everything and owning the whole country is highly unlikely.”

On Sunday, the scramble to evacuate American civilians and embassy employees from Kabul — the very image that Mr. Biden and his aides agreed they had to avoid during recent meetings in the Oval Office — unfolded live on television, not from the U.S. Embassy roof but from the landing pad next to the building. And now that the Afghan government has collapsed with astonishing speed, the Taliban seem certain to be back in full control of the country when the anniversary of the Sept. 11, 2001, attacks is commemorated less than a month from today — exactly as they were 20 summers ago.

Mr. Biden will go down in history, fairly or unfairly, as the president who presided over a long-brewing, humiliating final act in the American experiment in Afghanistan. After seven months in which his administration seemed to exude much-need competence — getting more than 70 percent of the country’s adults vaccinated, engineering surging job growth and making progress toward a bipartisan infrastructure bill — everything about America’s last days in Afghanistan shattered the imagery.

Even many of Mr. Biden’s allies who believe he made the right decision to finally exit a war that the United States could not win and that was no longer in its national interest concede he made a series of major mistakes in executing the withdrawal. The only question is how politically damaging those will prove to be, or whether Americans who cheered at 2020 campaign rallies when both President Donald J. Trump and Mr. Biden promised to get out of Afghanistan will shrug their shoulders and say that it had to end, even if it ended badly.

Mr. Biden knew the risks. He has often noted that he came to office with more foreign policy experience than any president in recent memory, arguably since Dwight D. Eisenhower. In meetings this spring about the coming U.S. withdrawal, Mr. Biden told aides that it was crucial they avoid the kind of scene that yielded the iconic photographs of Americans and Vietnamese scrambling up a ladder to a helicopter on the roof of the U.S. Embassy in Saigon when it was frantically evacuated in 1975, as the Vietcong swept into the city.

COVID-19: Why meeting final lockdown roadmap target may not mean the end of debates about our freedoms

Coronavirus: Italy’s doctors and nurses are in trauma over deaths of more than 100 colleagues