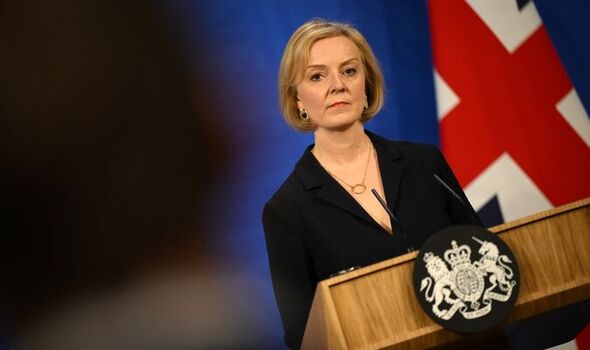 In another bruising day, which saw Conservative party members turn against her, ministers urged Ms Truss to up her game of face the chop. It comes as rumours continue to swirl in Westminster of plots to topple the Prime Minister who has been severely weakened after U-turning on most of her calamitous mini-Budget.

Rishi Sunak, Penny Mordaunt, Ben Wallace and new Chancellor Jeremy Hunt are the favourites to replace her with some mutinous MPs calling for Boris Johnson and even Theresa May to come back.

Arch critic Michael Gove said it is now a matter of when not if Ms Truss is removed as he warned Britons to expect “a hell of a lot of pain in the next two months”.

Despite the onslaught, Ms Truss put on a brave face on Tuesday night as she continued her charm offensive to win over angry backbenchers.

Her meeting with Tory MPs from the European Research Group was “positive” according to chairman Mark Francois.

He said: “She was absolutely committed to see a robust outcome regarding the Northern Ireland Protocol.”

And party Chairman Jake Berry, writing in the Daily Express, said it was time for Conservatives to unite behind Ms Truss who had shown resilience by apologising to the nation and changing course.

He said: “Against a backdrop of globally rising inflation and interest rates, the Prime Minister has admitted we went too far and too fast with measures aimed at growing our economy and has had the mettle to ­apologise and change course, in the national interest.

“We Conservatives must now unite and spend the next two years on the things that matter.

“Our country remains a great one, and it’s only with a united Conservative government that we can deliver the things to make it ­better still.” Ms Truss’s premiership remains in a perilous position after a damning poll showed that 55 per cent of party members want her gone.

MPs are considering whether and how to stage a coup in the wake of Mr Hunt’s extraordinary demolition of her flagship ­economic plans.

Backbencher Robert Largan penned an article warning of the dangers of “dumpster fires”, making a thinly-veiled comparison with the state of the Government.

He said: “The act of extinguishing the flames could well be the end of the skip they originated in. But urgent action is necessary nevertheless.” Defence minister James Heappey insisted that Ms Truss had ­apologised more quickly than Boris Johnson did, but also signalled problems ahead as he warned he will quit if she cuts funding for the military.

Asked how many more mistakes she could afford, the Armed Forces minister told Sky News: “Well I suspect, given, how skittish our politics are at the moment, not
very many.”

A group, dubbed the “Balti Bandits”, led by Mel Stride were understood to have met for an Indian takeaway on Monday night to discuss the PM’s future. Ex-ministers John Glen, Nick Gibb, Mark Garnier and Shailesh Vara were believed to have been at the ­meeting in Mr Stride’s House of Commons office.

Backbenchers Simon Hoare, Angela Richardson and Simon Baynes were also said to have joined in the gathering.

Meanwhile, Mr Gove, the former cabinet ­minister, who backed Rishi Sunak in the ­summer and was an early opponent of Ms Truss’s mini-Budget, said her programme had now been “shredded”.

At a private event Mr Gove said that “we are going through hell” and “after hell comes purgatory and paradise”.

He added: “Purgatory is going to be a tough economic medicine applied in this country and elsewhere. For how long I don’t know.

“But until and unless the interest rate increases and other measures required in order to kill and reduce inflation are in place, then we won’t get out of this mess.”

Asked whether it was “no longer a ­question of whether Liz Truss goes, but when she goes,” Mr Gove agreed that was ­“absolutely right”.

The former Levelling-Up Secretary added: “The question for any leader is what ­happens when the ­programme or the platform on which you secured the leadership has been shredded.”

Much will hang on the stance taken by powerful 1922 chief Sir Graham Brady, who met Ms Truss on Monday.

There are suggestions he wants to hold off any action until the Budget on Halloween – when the Chancellor is expected to lay out a nightmare menu of £40billion of spending cuts.

The official told reporters that “he’s helping the Prime Minister” as part of her political team, without specifying what his job title actually was.

'I own it:' U.S. Navy secretary resigns over handling of coronavirus-hit carrier