COLUMBUS, Ohio — For Democrats of late, winning in Ohio has been a bit like Lucy and the football.

First, Hillary Clinton made a late push there in 2016, returning to the state on the weekend before the election with no less a local celebrity than LeBron James, even though she had stayed away for much of the fall. Then, in the 2018 governor’s race, Democrats were optimistic about Richard Cordray, the wonky former head of the Consumer Financial Protection Bureau. And in November, it was President Biden who made an 11th-hour stop in Ohio, even though his campaign was also skeptical about its chances there.

Each candidate lost, and for the two presidential hopefuls, it was not even close.

But Ohio Democrats are getting their hopes up again, aiming to capitalize on Senator Rob Portman’s surprise announcement last month that he was retiring and on Republican infighting after more than a decade of G.O.P. dominance at the state level.

“I think people will look for something different,” Senator Sherrod Brown, the only remaining Democrat in statewide office, said of his party’s chances to pick up the Portman seat in 2022. “There’s a whole lot of people whose lives have gotten worse in the last five to 10 years.”

If Democrats are to increase their Senate seats significantly beyond the 50 they now hold, with the party relying on Vice President Kamala Harris as a tiebreaker in the event of a 50-50 deadlock, states like Ohio are essential. They owe their narrow advantage to the fast-growing South and West, having picked up Republican-held seats in three states — Georgia, Arizona and Colorado — that Mr. Biden also carried in November.

Yet the president’s recent challenges with some of his appointments and coronavirus relief legislation make the limitations of such fragile Senate control vividly clear: To claim something larger than what’s effectively a Joe Manchin majority, in which appointments and the shape of legislation can be determined by a single red-state senator, Democrats will have to go on the offensive next year in a part of the country that has proved far more fickle for them: the industrial Midwest.

Mr. Biden’s hopes for working with a more expansive majority will hinge on whether his party can capture a cluster of Republican-held seats across the Big Ten region: in Pennsylvania, Ohio, Wisconsin and Iowa. Former President Barack Obama won all of those states both times he ran, but they have become more forbidding for Democrats, or at least more competitive, as working-class white voters have become more reliable Republicans since the rise of former President Donald J. Trump.

“If we’re going to have a real majority for Biden, we’ve got to figure out how we can get up to 52 to 53 seats, and that means Pennsylvania, Ohio and Wisconsin,” said Doug Thornell, a Democratic strategist. (Iowa, which has been as difficult for Democrats as Ohio in recent years, may be competitive as a Senate battleground, but only if its longtime Senator Charles E. Grassley, 87, retires.) 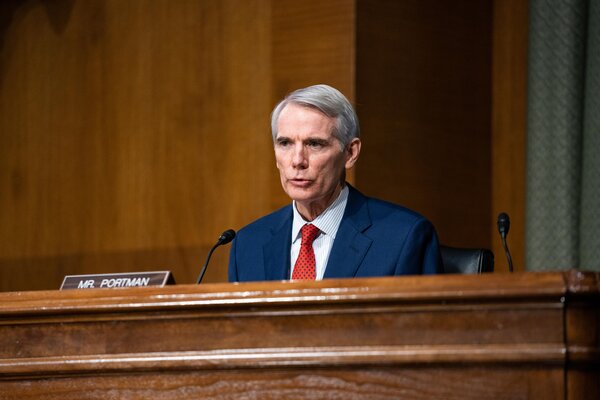 Beyond the question of the Senate majority, how these states behave in 2022 could carry profound implications. If they revert to a more Democratic orientation in the aftermath of the Trump era, it would suggest that the rightward shift of working-class white voters in recent years was driven by affection for one outsize figure. If Republicans win across the region, though, it may portend a more enduring realignment and raise sobering questions for Democrats about the Senate and presidential maps.

And few states, in the Midwest or beyond, have the symbolic resonance of Ohio, which for decades served as a political bellwether and swing-state proving ground. Now, however, even the most optimistic Ohio Democrats acknowledge that they reside in a Republican-leaning state and must take lessons on how to compete from their ideological counterparts in other precincts of red-state America.

“We should look at how Democrats won in Montana and Kansas,” said Mayor Nan Whaley of Dayton, who is planning a run for governor next year. “That’s a new place for us to look because we’ve always been a battleground, but national messages don’t fit right into Ohio.”

One of the most consequential questions for Ohio Democrats is out of their hands: What direction will Republicans take in the Biden era? “Where they land is going to be a big deal,” Ms. Whaley said.

Had Mr. Portman run for re-election, this would have been a far less weighty question in Ohio. He and Gov. Mike DeWine, another establishment-aligned and well-known incumbent, would have campaigned on their own political brands, never confronting Mr. Trump but also never embracing him, either.

Now, though, the open Senate seat is thrusting the loyalty-obsessed former president to the forefront of his party’s nascent primary, as the announced candidates compete to see who can hug Mr. Trump tightest.

Josh Mandel, a former state treasurer who twice ran against Mr. Brown before withdrawing from the 2018 race and disappearing from public view, has resurfaced as an ardent MAGA man. In interviews and tweets since entering the race to succeed Mr. Portman, he has claimed that Mr. Trump’s second impeachment prompted him to run — never mind his previous two bids — and vowed to advance Mr. Trump’s “America First Agenda.”

Perhaps more striking, though, is the maneuvering by Jane Timken, a wealthy executive who was elevated to the chair of the Ohio Republican Party in 2017 in part because Mr. Trump took the extraordinary step as president-elect to make calls to party activists on her behalf.

Mr. Portman, hinting where his eventual preferences may lie, has praised Ms. Timken, saying that “over the last couple of years, she has somehow managed through her communications and her organizing to keep all wings of the party moving in the same direction.”

Yet Ms. Timken’s conduct since the start of this year illustrates the high-wire act Mr. Trump may force Republicans to execute in next year’s election.

The weekend after the Jan. 6 attack on the Capitol, Ms. Timken, then still the state party chair, sent an email to Republicans urging them to “remember that whether it comes to our country or our party, our shared progress and prosperity is never about one person, one candidate or one government official.”

A few weeks later, addressing a question about the decision by Representative Anthony Gonzalez of Ohio to vote to impeach Mr. Trump, Ms. Timken said she was not sure she would have made the same choice but added that he had “a rational reason” for his vote. She called him “an effective legislator.”

Ms. Timken changed her tune, however, just hours before quitting her state party post last month as she prepared to enter the Senate race.

“Anthony Gonzalez made the wrong decision on impeachment and I disagree with his vote,” she said. “This sham impeachment is illegal and unconstitutional.”

And then, just this week, Ms. Timken, under pressure to show her fealty to Mr. Trump, issued a statement demanding that Mr. Gonzalez resign from his seat. Her campaign, seeing private polling that showed an overwhelming majority of Ohio Republicans wanted to oust Mr. Gonzalez, realized it needed to put the issue to bed, according to one adviser.

A number of Ohio Republicans were struck by the speed of her shift, including one who may also enter the Senate race: Representative Steve Stivers, the former chair of the House G.O.P. campaign arm.

“Wait till you quit before you attack somebody,” Mr. Stivers said of Ms. Timken’s broadside on Mr. Gonzalez.

While he has yet to announce his intentions, Mr. Stivers, who has said he would prefer Mr. Trump to enjoy a quiet retirement à la George W. Bush, believes the competition to cozy up to the former president could leave an opening in the primary.

“My lane is looking pretty empty,” he said. “I should be able to go about 180 miles per hour in it.”

Though it’s uncertain how strong Mr. Trump’s political standing will be next year, particularly if he were to be indicted in one of the criminal investigations he faces, many veterans of Ohio politics believe the only path to the Republican Senate nomination is through the former president.

“Jane would be honored to have the president’s endorsement,” said Corry Bliss, who ran Mr. Portman’s 2016 campaign and is advising Ms. Timken. He made sure to note that she had been Mr. Trump’s “handpicked chair.”

To a number of Ohio Republicans, the importance of their eventual nominee pales in comparison to what they believe is the fundamental political math of a state that absorbs the Rust Belt and Appalachia. “Our suburban losses are dwarfed by their losses among working-class whites,” said Nick Everhart, a Columbus-based G.O.P. strategist.

Ohio Democrats don’t deny that they are underdogs — or that to win, they may need the Republican Party to remain fractured.

They point to the scandal-plagued Statehouse, where the House speaker is under federal indictment on corruption charges, as well as tensions between Trumpian legislators and the mild-mannered Mr. DeWine. Then there’s Mr. Trump and the widening gap between how he’s viewed by Republican activists and the broader electorate.

“I don’t know if I’d call it a prerequisite for us to win, but their chaos is our opportunity,” said Liz Walters, the newly elected Ohio Democratic state chair.

But Ohio Democrats may have their own drama.

While Representative Tim Ryan, a veteran Youngstown-area lawmaker, has been clear about his intent to run for Mr. Portman’s seat, he may face a primary that would highlight some of the tensions in the Democratic coalition.

Lamenting how Mr. Trump had tapped into the “angst, anger and frustration” of onetime Ohio Democrats, longtime Representative Marcy Kaptur said that Mr. Ryan, who like her represents one of the lowest-income, predominantly white districts in the country, would “be able to reach people” the party has lost.

A handful of other Democrats are considering entering the Senate race. They include Amy Acton, the former director of the state health department; Emilia Strong Sykes, the state House minority leader; and Kevin Boyce, a local official in Columbus who previously served in the state House. Ms. Sykes said the party’s turnout efforts in Ohio’s cities had been “awful” and called for a new approach.

“Recreating Sherrod Brown — that doesn’t work because Sherrod Brown is Sherrod Brown,” she said, a barely veiled reference to Mr. Ryan’s attempt to pitch himself as a white populist. “We’re going to have to find a candidate who’s exciting and can appeal to women and people of color.”

Ms. Sykes, who is Black, said she had been encouraged to run for the Senate by a handful of progressive advocacy groups and was assessing the landscape.

She spoke for a number of Ohio Democrats when she said that Mr. Portman’s surprise retirement had prompted an otherwise depressed party to again place hope over history.

“Had he not done that, it would’ve been a lost cause,” she said of the senator’s exit. “But now there’s new energy and we have to at least try.”