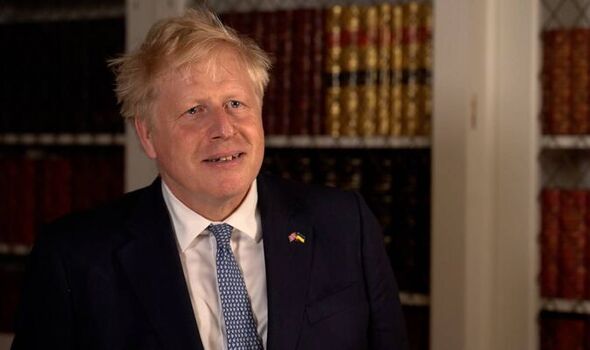 He insisted the vote gave him a “clean slate” and a strengthened mandate to carry on in Downing Street. Allies of the Prime Minister were disappointed that 41 per cent of Tory MPs registered no confidence in his leadership of the party in the ballot.

But Mr Johnson declared himself “very pleased” with the result, pointing out he had won a bigger percentage of support among MPs than when first elected Tory leader in 2019.

The ebullient Prime Minister told the Daily Express the result was a “clean slate to get back to delivering for the country”.

He said the speculation about his leadership was now “done and dusted”, adding: “I now want to put this behind me so we can deliver for Britain.”

And in a television interview, he said: “This was a very good result for politics and the country. It’s a convincing result and a decisive result.

“What it means is that as a Government we can move on and focus on the stuff that really matters to people.”

He added: “I am grateful to colleagues for the support they’ve given me and of course, I understand that what we need to do now is come together as a government and as a party.

“That is exactly what we can now do. And what this gives us is the opportunity to do our job, which is to focus on the stuff that I think the public actually want us to be talking about.

Mr Johnson insisted he can lead the party to another general election triumph, telling Tories: “The best is yet to come.”

The PM is now expected to come out fighting, with measures to widen home ownership planned for later this week and a major Plan for Growth focus on tax cuts to be unveiled next week.

Many were disappointed by the margin of the victory, with 59 per cent supporting him and 41 per cent signalling no confidence in his Conservative leadership.

He was supported by a smaller proportion of MPs than Theresa May in a 2018 confidence vote months before she was finally forced out. But Cabinet ministers insisted the vote was a victory that should end the speculation about his future.

Foreign Secretary Liz Truss tweeted: “Pleased that colleagues have backed the Prime Minister. I support him 100 per cent. Now’s the time to get on with the job.”

Education Secretary Nadhim Zahawi said it is “time to move on”.

He said: “The Prime Minister won handsomely. We are only able to deliver when we are united and it is time to draw a line under this.”

Foreign Office Minister James Cleverly, a leading supporter of the PM, said: “People have got to recognise they didn’t get the vote of no confidence through and what they should now do is say we respect the democratic decision of the party and we are going to support the Prime Minister getting on with his job.”

Mr Cleverly said it was a “clear win” and suggested no other candidate would be able to secure the support of 60 per cent of MPs.

The ballot was triggered after more than 54 Tory MPs contacted senior party official Graham Brady to call for the vote.

Announcing the results in a Commons committee room, Sir Graham Brady said: “I can report as returning officer that 359 ballots were cast, no spoilt ballots, that the vote in favour of having confidence in Boris Johnson as leader was 211 votes and a vote against was 148 votes.

“And, therefore, I can announce that the parliamentary party does have confidence in Boris Johnson.”

Mr Johnson and his allies spent the day scrambling to get Tory MPs to rally round and support him in the ballot.

In a letter to every Tory MP, the PM conceded that some of the criticism he had faced in recent weeks had been “fair” and he promised to “listen and learn”.

He said: “I know that over recent months I have come under a great deal of fire, and I know that experience has been painful for the whole party.

“Some of that criticism has perhaps been fair, some less so. Where there have been valid points, I have listened and learned and made significant changes.

“And I will of course continue to listen and learn from colleagues about the improvements you wish to see.”

He also promised to cut taxes as soon as possible, and could give a clear signal of his blueprint for reducing levies in a major plan for economic growth next week.

Mr Johnson was enthusiastically cheered by supporters at the full meeting of the 1922 Committee of Tory MPs. A senior party source described the PM as “pumped” at the gathering.

A senior party source described the PM as “pumped” at the gathering.

He told MPs he was “glad” the vote was taking place because it gave them a chance “to end the media-driven focus on the leadership” of the Conservative Party.

The PM said: “If you will give me your support tonight we have the chance to stop talking about ourselves and start talking exclusively about what we are doing for the people of this country.”

Boris Johnson has no prospect of his Tory critics piping down after last night’s confidence vote.

The Prime Minister may have won the vote, yet the result shows a significant minority – two fifths of his MPs – are implacably opposed to his leadership.

Those critics represent a mixed bag of malcontents.

Some are hardened EU Remainers who have never forgiven the Prime Minister for his role in the 2016 referendum campaign or delivering on his promise to Get Brexit Done.

Some are self-styled “One Nation” Tories, political wets who want a soft-centre brand of Conservatism.

A few are traditional Tories repelled by the Covid lockdown breaches in Downing Street or fed up with the lavish public spending funded by steep tax rises provided by Mr Johnson and Chancellor Rishi Sunak.

Under Tory party rules, the Prime Minister’s enemies within his own ranks will have to wait at least a year until they can attempt to trigger a rerun of the confidence ballot. But few will have the patience for that long game.

Instead, they will find other ways to undermine the Prime Minister and try to force him out.

Enough MPs voted against him to wipe out his majority in Commons votes and potentially wreck his legislative plans for the rest of the parliament.

Rebels will also put pressure on Cabinet ministers to quit or tell Mr Johnson that his premiership is untenable.

Calls for the Cabinet to strike the killer blow that the confidence vote failed to deliver will intensify in the coming months.

Last night’s vote looks very much like the opening of a bloody new Tory civil war.

Putin war could start any day: Ukraine in horror warning as Russia builds up troops