Hospitals have been told to test as many staff as possible for coronavirus after Health Secretary Matt Hancock removed a cap on the number of NHS workers who can be assessed each day.

The government aims to increase this further to 25,000 tests per day by the middle of this month.

However, concerns have been raised about the country’s current level of testing, following comparisons with nations such as Germany, which is estimated to now be conducting as many as 500,000 tests per week.

And questions have been asked about why the UK isn’t even using its full testing capacity at laboratories.

Only 8,630 people were tested for coronavirus on Monday, despite the UK having the ability to test many more. 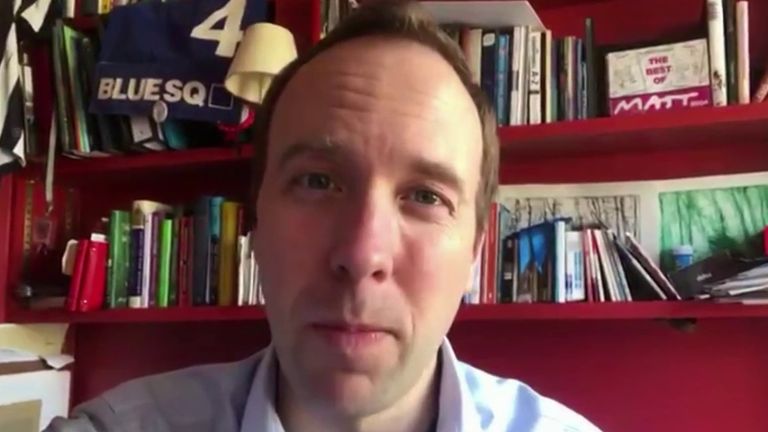 Mr Hancock has now acted to utilise the spare testing capacity by removing a limit on the number of NHS staff who can be tested.

Previously, 85% of UK testing was allocated for patients with COVID-19 symptoms, with the remaining 15% kept for hospital staff.

Due to the extra testing capacity now available, the health secretary has now scrapped this limit and ordered the NHS to test as many staff as possible, as well as patients.

Any spare testing capacity will now be used to test NHS staff and their families in order to keep hospital workers on the frontline in the battle against coronavirus.

Sky News understands this will now mean thousands of NHS staff will be able to get tested every day.

More than 900 NHS staff were tested over the weekend as hospital workers began to be assessed for COVID-19.

Downing Street said on Wednesday that more than 2,000 NHS staff have now been tested.

He explained the importance of testing in order to allow NHS staff, who might be self-isolating for fear of having caught coronavirus, to get back to work.

“One of the reasons why we have such a lot of debate about testing is a worry that there are too many staff – who may not be displaying very acute symptoms or may have had symptoms and gone through it – but are living with someone who may or may not have the virus,” he told Sky News’ Kay Burley@Breakfast show.

Edwin Poots elected as DUP leader: Who is Edwin Poots?