Cabinet Minister George Eustice signalled that talks about extending a grace period that allows chilled meats to be shipped from mainland Britain to Northern Ireland were heading in the right direction. He said: “I think we are getting some positive indications and it’s always our view that it’s better if we can reach agreement with the European Union on these things. “It didn’t make any sense to simply say that there’s a ban on the sale of sausages to Northern Ireland.”

He added on LBC Radio: “We’re still in dialogue with the European Union about some longer-term solutions on the wider issues around export health certificates.

“While those are ongoing, I think it makes sense for them, just for a few more months, to leave the current arrangement we have in place.”

The Government and the EU have been locked in a dispute over the implementation of the Protocol – the part of the Brexit divorce deal aimed at avoiding a hard border with Ireland.

The agreement keeps Northern Ireland in the single market to avoid a border on land. But unionists fear it separates the country from the rest of the UK by effectively drawing a border in the Irish Sea.

Suppliers in mainland Britain are said to be reluctant to export goods there due to the increase in paperwork post-Brexit.

And supermarkets have warned of less choice on shelves as they struggle to get hold of products since the Protocol came into force in January. 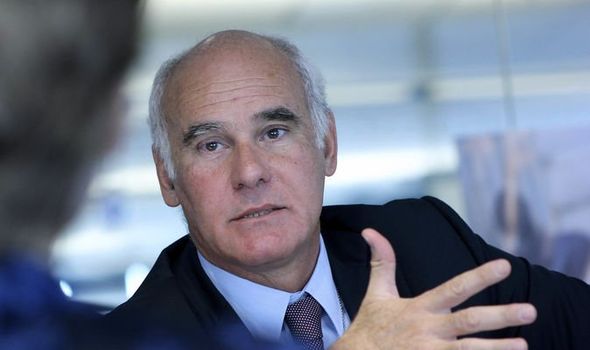 One of the impacts of the deal is that deliveries of chilled meats –including sausages and burgers – could be effectively banned from crossing the Irish Sea from Great Britain at the end of the month if there is no continuation of the grace period.

The UK had previously threatened to unilaterally suspend parts of the deal if it continues to cause problems – but that would trigger a retaliation by Brussels.

Joao Vale de Almeida, the EU’s ambassador to the UK, said it was “encouraging” that London has requested an extension.

He told the Lords European Affairs Committee Brussels is turning “regulations up- side down to try to find a solution” to Protocol issues.

As a way round the sausage war, he suggested the UK temporarily follow EU fresh food rules, to “remove checks at the border” and “allow time for the infrastructure that is needed in Northern Ireland to be built”.

Brexit POLL: Should Boris compromise on red lines for deal or should he accept hard exit?

More risks to pregnant women, their newborns from Covid-19 than previously known: Study