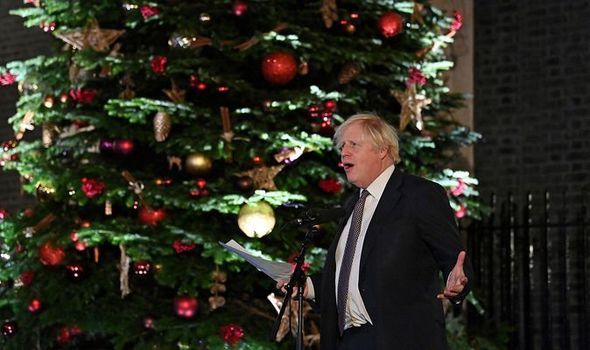 The Prime Minister vowed to “throw everything” at the Omicron Covid variant, but with “balanced and proportionate measures”.

And he told the country to carry on celebrating Christmas, insisting there was no need to cancel parties or school nativity plays.

Mr Johnson, who will have his booster tomorrow, said temporary jab centres would be “popping up like Christmas trees”.

He said: “We’re going to be throwing everything at it in order to ensure that everyone eligible is offered that booster in just over two months.

“It’s time for another Great British vaccination effort. We’ve done it before, we’re going to do it again, and let’s not give the virus a second chance.”

At least 400 military personnel and volunteers will help the NHS and the most vulnerable will be offered a fourth jab.

However UK Health Security Agency chief Dr Jenny Harries sparked alarm among businesses when she suggested people should limit social contacts in the run-up to Christmas.

Kate Nicholls of the trade body UK Hospitality said the “chilling talk” could hammer the sector before its busiest period.

She added that some bookings had already been cancelled.

Mr Johnson distanced himself from Dr Harries’ advice, insisting the Government did not want people to cancel Christmas parties or nativity plays.

He said: “We don’t want people to cancel such events.

“And we think that’s the right way to go for the time being, until we know more and until we can get more boosters into people’s arms.”

One example of the new Covid curbs, in force until March, says people must isolate for 10 days if they come into contact with someone who has the Omicron variant, or risk a fine of up to £10,000. Meanwhile 18,215,535 third jabs have been given, a day-on-day rise of 318,671. Another 39,716 18 jab give Covid cases were recorded in the UK and a further 159 people died after testing positive.

Eight more Omicron cases were found in England, taking the total to 13.There were nine in Scotland.

English cases were identified in the East Midlands, the East, London and the North-west. Health Secretary Sajid Javid said the latest restrictions were to “buy the time we need to assess the variant”.

He added: “If we want to give ourselves the best chance of a Christmas with our loved ones, the best thing we can all do is step up, roll up our sleeves and get protected.”

But NHS Confederation chief Matthew Taylor warned that stepping up the booster programme would have “consequences” for an already-stretched service.

Tory MP Steve Baker said the PM was choosing the path towards “hell”. The Prime Minister said he understood the frustration and “sense of exhaustion that we could be going through this all over again”.

But he said: “Today our position is – and always will be – immeasurably better than it was a year ago.”

Sir David Cameron? Lindsay Hoyle calls for ALL ex-PMs to be knighted after Blair honours

In Brexit Britain, there may no longer be too many cooks in the kitchen