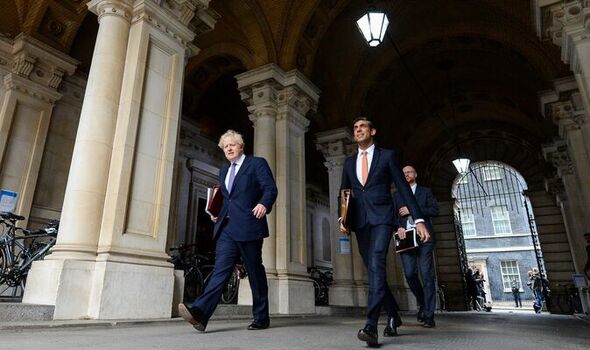 Mr Sunak ordered an inquiry to find the culprit behind leaks about wife Akshata Murty’s non dom tax status. And it emerged last night that he has written to the Prime Minister asking him to refer his declarations to the Independent Adviser on Ministers’ Interests. Mr Sunak posted on Twitter: “I have always followed the rules and I hope such a review will provide further clarity.”

He said in his letter to Mr Johnson his “overriding concern” was to retain public confidence in the answers that were given – and he added: “I am confident such a review of my declarations will find all relevant information was appropriately declared.”

But Mr Sunak’s critics claim he is focusing on the wrong issue.

Labour said the row was about “basic fair- ness” and the Sunaks should not enjoy “special arrangements” to reduce tax bills.

The Chancellor has taken the unusual step of moving out of Downing Street – with sources insisting they had always intended to spend more time in their west London home as their elder daughter, Krishna, entered her final term of primary school.

He is still expected to stay at No 11 during the week while joining them at weekends. Aides said claims that he was thinking of quitting his job were “not true at all”.

Relations between Mr Johnson and has Chancellor were strained after the PM’s future was pushed to the brink over allegations of lockdown rule-breaking.

But Whitehall sources said the pair had been laughing and joking together like “best mates” last week when they made a joint visit to a hospital.

Kit Malthouse, an ally of Mr Johnson, said Mr Sunak had been a “remarkable force for good” in British politics.

The Policing Minister added that revelations about Ms Murty’s non dom tax status was “not ideal”. But he said the Chancellor was a “smart, clever, committed politician” who had helped steer the economy through the worst of the pandemic.

Yet Shadow Home Secretary Yvette Cooper said Mr Sunak’s family should pay tax in the same way as everyone else and should not enjoy “special arrangements” to reduce their bills.

She added: “I don’t think the Chancellor gets that. That raises real questions about his judgment.”

Ms Murty, who remains an Indian citizen, announced on Friday that she would now pay UK taxes on all her worldwide income as she did not want her status to be a distraction for her husband.

It has been estimated that being non dom could have saved her £20million in taxes on dividends from her shares in Infosys, an Indian IT company founded by her father.

Mr Sunak has also faced claims he had a “conflict of interest” when he held a US green card because it meant he had permanent resident status in America while being responsible for UK tax policy.

He retained the papers for more than a year after being put in charge of the Treasury.

Mr Malthouse said it was “not a brilliant time” for the details to come out when the country was struggling with a cost-of-living crisis but said Ms Murty had now “corrected” the situation. With some Tory MPs questioning whether any hopes Mr Sunak harboured of becoming Prime Minister were now dashed by the disclosures, Mr Malthouse denied that his career was “toast”.

He added: “Rishi has put in place some incredible support schemes during the pandemic at enormous speed.”

Mr Malthouse claimed Mr Sunak’s own political future was of “secondary importance” to what happened to the UK economy.

He insisted: “The key thing is that he remains committed to the job, which is to steer the British economy and its people through some very, very difficult and challenging moments.”

Allies of Mr Sunak believe the briefing against him came from a civil servant to the Labour party, who leaked it to the media.

But Tory MPs said the Chancellor “lacks judgment” and his response was “peevish”.

One stated Mr Sunak’s ambitions for No 10 were “over” but said he should not quit now, adding: “He should see it through.”

Ms Murty, estimated to be worth hundreds of millions of pounds, acted within the law by opting to be exempt from paying tax in the UK on foreign income. The fashion designer daughter of a billionaire, who married the Chancellor in 2009, is entitled to use the non dom arrangement.

But Tory Baroness Ros Altmann said politicians have a responsibility to “ensure beyond any reasonable doubt that there isn’t one rule for everyone else and one rule for those at the top of government”.

The peer said there are “questions to answer” because the Chancellor and his wife “live in publicly funded accommodation and particularly with the Chancellor’s role in imposing taxes and investigating the tax positions of ordinary citizens”.

The Liberal Democrats will try to introduce a bill in Parliament forcing Mr Sunak to reveal details about his family finances.

The party’s Treasury spokeswoman, Christine Jardine, said: “His continued refusal to answer basic questions about his family’s tax arrangements simply won’t wash. It shows he is completely out of touch with people struggling to pay their bills.

“The public deserve to know what other steps the Chancellor’s household may have taken to reduce their own tax bill while he hammers families around the country with unfair tax hikes.”