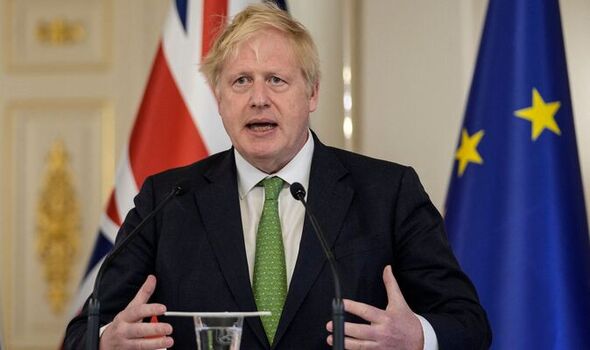 The Prime Minister said the 2019 post- Brexit treaty with the EU to avoid a trade and customs border between the province and Ireland did not have cross-community support and was blocking the formation of a new Northern Ireland government. Foreign Secretary Liz Truss will warn European Commission vice-president Maros Sefcovic today that Britain is prepared to take unilateral action to remove the protocol.

Her officials are drawing up draft legislation to remove the need for checks on all goods sent from Britain to Northern Ireland.

The proposed law would allow businesses in the province to disregard EU rules and remove the power of the European Court of Justice to rule on issues in the region.

Speaking at a press conference in Sweden, Mr Johnson said the Good Friday Agreement was “crucial” for the stability of the UK and of Northern Ireland and must command support across the community.

But he said: “Plainly, the Northern Ireland Protocol fails to do that and we need to sort it out.”

Meanwhile, US president Joe Biden stepped into the row with a pointed White House attack on Mr Johnson. A spokeswoman said the PM should show “leadership” by continuing talks with Brussels and not tearing up the deal to appease unionists.

German chancellor Olaf Scholz said “no one should unilaterally cancel, break or in any way attack the settlement”.

And Irish foreign affairs minister Simon Coveney warned that UK threats to override elements of the protocol “have gone down really badly” with the EU.