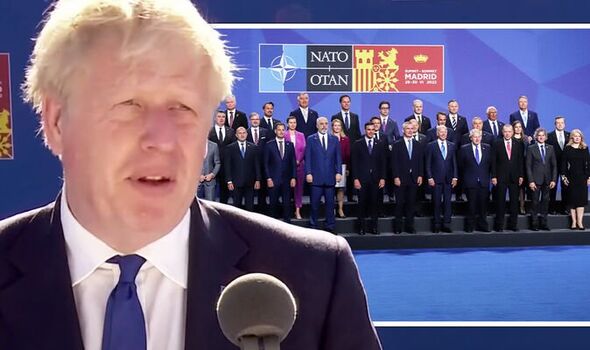 But Mr Johnson said he wants to build relationships rather than structures and suggested it could be more like “Eurovision” by bringing Israel and other nations into the fold. The Prime Minister said he has a vision based on the Roman “Mare Nostrum” – the Mediterranean Sea and the countries around it, and insisted Turkey was “vital”.

He said: “Emmanuel has an idea, which I actually claim paternity of this idea.

“That’s basically what I think. Of course Ukraine, Turkey, Maghreb, there’s got to be a role for all of us in a wider conversation about issues that affect all of us.”

“I think possibly what’s going on here is that there are several different ideas. That doesn’t mean that they are necessarily all the same.”

“I think possibly rather than inventing new structures, let’s look at building up relationships.”

So, yes or no to Macron?

Boris responded: “In so far as it is compatible with some of the things that I have been talking about just now it is worth looking at.”

“There’s a role for… I think Turkey is crucial. I think the North African littoral is also a very important area for the wider European debate. Israel. Come on.”

Brexiteers fear President Macron’s plans for a new European club would drag Britain back into the EU’s orbit and restart freedom of movement.

But No 10 insists the government would never sign up for such a deal.

Mr Johnson said talks with Mr Macron had been “particularly constructive” when they met at the G7 earlier this week.

“It was a series of really good conversations on a lot of issues,” he added. “

Girl, 8, suffers stroke and dies at school after two-hour battle to save her