President Biden spent two days warning about the climate crisis and promising that his administration would work to confront it, but Congress is not aligned on the solution. 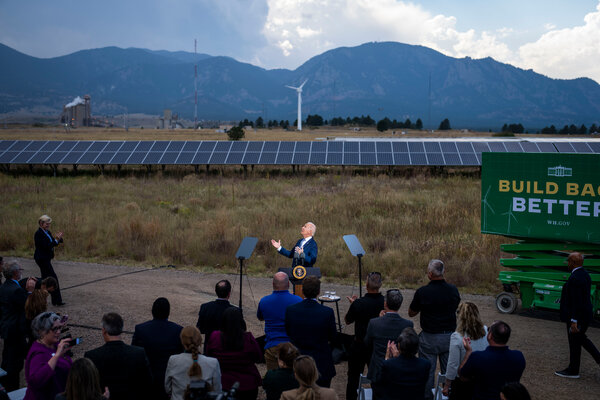 By Zolan Kanno-Youngs and Jim Tankersley

ARVADA, Colo. — President Biden warned on Tuesday that the United States had only a decade left to confront a global climate crisis, using his second day touring a wildfire-ravaged West to try to rally the public, and congressional Democrats, to support measures that his administration hopes will reduce the burning of fossil fuels.

Mr. Biden’s stops this week in Colorado; Boise, Idaho; and Long Beach and the Sacramento area in California amounted to more than an opportunity to call attention to the severe destruction of wildfires and other natural disasters that have been exacerbated by climate change. The visits were a last-ditch opportunity to sell the importance of measures aimed at mitigating climate change, some of which appear increasingly at risk in his spending packages.

“A drought or a fire doesn’t see a property line,” Mr. Biden said during remarks at a federal renewable energy laboratory. “It doesn’t give a damn for which party you belong to. Disasters aren’t going to stop. That’s the nature of the climate threat. But we know what we have to do. We just need to summon the courage and the creativity to do it.”

Underscoring the urgency, Mr. Biden added: “We don’t have much more than 10 years.”

Democratic leaders drafting a $3.5 trillion spending bill are struggling to match the urgency of Mr. Biden’s pleas with pushback from energy lobbyists and some key Democrats, who want a far less expansive effort than what Mr. Biden has in mind.

On Monday, during a visit to California’s Office of Emergency Services in the Sacramento area, Mr. Biden appeared to recognize that. Before he received a briefing on the wildfire damage, he reminded dozens of emergency workers in the conference room that he was not able to include all of his proposed investments to combat climate change in a bipartisan agreement that he reached this summer on infrastructure. He said he was focused on including them in the more sweeping $3.5 trillion package but acknowledged that it could fall short of his ambitions.