The president faces a balancing act: how to keep his pledge of a more compassionate approach to migrants while managing a surge of people at the border amid a pandemic. 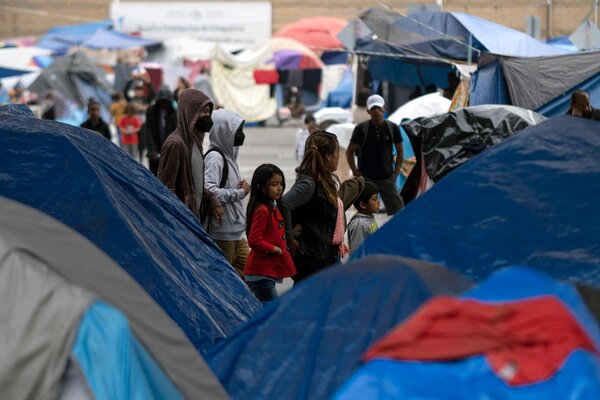 WASHINGTON — President Biden is coming under increasing pressure to abandon a Trump-era immigration rule that has sealed off the United States to most migrants during the pandemic, with human rights officials and two of the administration’s own medical consultants saying the measure endangers vulnerable families.

The policy, known as Title 42, allows border agents to turn away migrants at the southern border without giving them a chance to apply for protections in the United States. The order justifies the expulsions as a health measure to prevent the coronavirus from spreading in holding facilities.

On Monday, two physicians who work as consultants for the Department of Homeland Security sent a letter to members of Congress saying the rule has had the “perverse impact” of encouraging parents to send their children to cross the border alone, since Mr. Biden has chosen not to immediately turn away minors and instead is processing them into the United States. Most single adults and many migrants traveling together as a family, however, continue to be immediately turned around.

The Biden administration’s embrace of Title 42 highlights a difficult balancing act for the president: how to make good on his pledge to have a more compassionate approach to migrants fleeing poverty and persecution while managing a surge of people who want to come to the United States. The topic also leaves Mr. Biden open to political attacks from Republicans and moderate Democrats who say he risks losing control of the border.

Mr. Biden has promised that his administration would rely less on detention and more on programs that release migrants into the United States and track them to make sure they appear in immigration court. He has lifted various Trump-era restrictions, including a policy that forced migrants to wait in Mexico while their immigration cases are processed.

But Title 42 has drawn broad criticism from immigration advocates.

‘We don’t need lectures!’ Frost loses his cool as he launches Brexit attack on Joe Biden

MPs to get inflation-busting pay rise of almost £2,500 next month