President Biden is banking on the assumption that he will be remembered for finally extricating the country from the war in Afghanistan, not for how he did it. 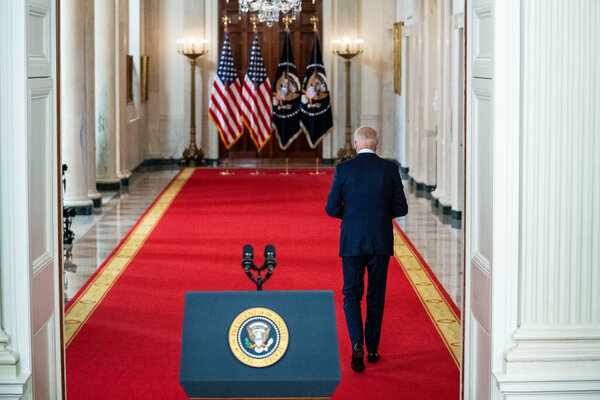 The forever war is over, but the forever debate may be only beginning. As he presided over the end of a lost 20-year mission in Afghanistan, President Biden on Tuesday touched off a prolonged argument for history over his decision to get out, how he handled it and what it means for the future of America.

In declaring an end to America’s misadventure in nation-building halfway across the world, Mr. Biden was playing a long game, banking on the assumption that he will be remembered by posterity for finally extricating the country from a quagmire, not for how he did it. While his approval ratings have sagged to the lowest levels of his short tenure, most Americans in polls still support leaving Afghanistan, and the White House assumes that they will quickly move on to other issues like the pandemic and the economy.

“We no longer had a clear purpose in an open-ended mission in Afghanistan,” the president said from the East Room of the White House, where so many important speeches about Afghanistan have been delivered by four American presidents over the past two decades. “After 20 years of war in Afghanistan, I refused to send another generation of America’s sons and daughters to fight a war that should have ended long ago.”

He cited the more than 120,000 Americans and Afghan allies evacuated in the two weeks since the Taliban seized power in Kabul, boasting that “no nation has ever done anything like it in all of history.” And he maintained that after more than 2,400 American combat deaths, it was past time to disentangle from a country where the United States has no vital national interest in staying.

But the images of pandemonium at the Kabul airport and the president’s failure to evacuate every American as he promised just days ago raised questions about his leadership that may prove damaging in the long run as well. They could fit into a broader indictment by Republicans portraying Mr. Biden as an unreliable, ineffective commander in chief who humiliated America on the international stage — never mind that the withdrawal was based on an agreement negotiated with the Taliban by President Donald J. Trump.

“President Biden’s unseemly victory lap was detached from reality,” Senator Ben Sasse, Republican of Nebraska, wrote on Twitter after the president’s speech. “His callous indifference to the Americans he abandoned behind enemy lines is shameful.”

Representative Elise Stefanik of New York, a member of the House Republican leadership, chastised Mr. Biden for refusing to take responsibility for the messy pullout. “Shouting at and blaming the American people is not what was needed in this speech,” she said. “For Joe Biden, the buck stops with anyone and everyone but himself.”

Supporters of Mr. Biden’s decision pushed back, saying he demonstrated political courage in sticking with the withdrawal in the face of powerful blowback.

“There was no perfect time or way to exit Afghanistan,” said former Representative Justin Amash, a former Republican from Michigan who left his party during Mr. Trump’s presidency. “President Biden directed the evacuation of more than one hundred thousand people and got our troops out. I disagree with the president on a lot, but I’m grateful he pushed through despite all the pressure.”

Overall, 38 percent of Americans approved of Mr. Biden’s handling of the pullout. But they do not hold him solely at fault — 20 percent say he deserved “most blame for the current state” of Afghanistan, while 10 percent named former President George W. Bush, who opened the war after the attacks of Sept. 11, 2001, and 9 percent singled out Mr. Trump, and others pointed to the Afghans, the generals or others.

Beyond the politics will come debate about what the Taliban victory means for America’s place in the world. Mr. Biden is intent on setting a new course for foreign policy, somewhere between the muscular, trigger-ready internationalism prevalent under Mr. Bush and, at times, President Barack Obama, and the “America First” isolationism of Mr. Trump.

“The world is changing,” Mr. Biden said on Tuesday, citing the challenges of China, Russia, cybersecurity and nuclear proliferation. America must lead, he added, but not always with military force. The withdrawal from Afghanistan signals the end of “an era of major military operations to remake other countries.”

Even so, even some European allies have expressed concern that the defeat of the United States-led coalition in Afghanistan will embolden terrorist groups and weaken American standing in the world.

Part of Mr. Biden’s political trouble in handling the Afghan withdrawal has been reconciling his own words with the reality on the ground. He was the one who vowed in April to conduct the withdrawal “responsibly, deliberately and safely” and added in July that it was “proceeding in a secure and orderly way.”

Understand the Taliban Takeover in Afghanistan

Who are the Taliban? The Taliban arose in 1994 amid the turmoil that came after the withdrawal of Soviet forces from Afghanistan in 1989. They used brutal public punishments, including floggings, amputations and mass executions, to enforce their rules. Here’s more on their origin story and their record as rulers.

Who are the Taliban leaders? These are the top leaders of the Taliban, men who have spent years on the run, in hiding, in jail and dodging American drones. Little is known about them or how they plan to govern, including whether they will be as tolerant as they claim to be. One spokesman told The Times that the group wanted to forget its past, but that there would be some restrictions.

How did the Taliban gain control? See how the Taliban retook power in Afghanistan in a few months, and read about how their strategy enabled them to do so.

What happens to the women of Afghanistan? The last time the Taliban were in power, they barred women and girls from taking most jobs or going to school. Afghan women have made many gains since the Taliban were toppled, but now they fear that ground may be lost. Taliban officials are trying to reassure women that things will be different, but there are signs that, at least in some areas, they have begun to reimpose the old order.

What does their victory mean for terrorist groups? The United States invaded Afghanistan 20 years ago in response to terrorism, and many worry that Al Qaeda and other radical groups will again find safe haven there. On Aug. 26, deadly explosions outside Afghanistan’s main airport claimed by the Islamic State demonstrated that terrorists remain a threat.

How will this affect future U.S. policy in the region? Washington and the Taliban may spend years pulled between cooperation and conflict, Some of the key issues at hand include: how to cooperate against a mutual enemy, the Islamic State branch in the region, known as ISIS-K, and whether the U.S. should release $9.4 billion in Afghan government currency reserves that are frozen in the country.

But on Tuesday, he suggested it was unrealistic to have expected that. “Now, some say we should have started mass evacuations sooner and, ‘Couldn’t this have been done in a more orderly manner?’” he said. “I respectfully disagree.”

“The bottom line,” he added, “is there is no evacuation from the end of a war that you can run without the kinds of complexities, challenges, threats we faced. None.”

Likewise, he was the one in July who said it was “highly unlikely” that the Taliban would take over the country and that there was “no circumstance” of an embarrassing, chaotic exit akin to the helicopters lifting off the embassy in Saigon in 1975.

And he told George Stephanopoulos of ABC News after the Taliban took over Kabul that he would keep United States troops in Afghanistan beyond his self-imposed Aug. 31 withdrawal deadline if necessary to evacuate any Americans still on the ground. “If there are American citizens left, we’re going to stay until we get them all out,” he said then.

With 100 to 200 American citizens left in Afghanistan who wanted to leave, Mr. Biden made no effort on Tuesday to explain why he did not then extend the deadline as he said he would. But he suggested that most of those still there were dual citizens who “earlier decided to stay because of their family roots in Afghanistan,” only to later change their mind.

Instead, he pointed to the 5,500 Americans who were successfully evacuated. “The bottom line: Ninety percent of Americans in Afghanistan who wanted to leave were able to leave,” he said. (The White House later corrected him and said it was 98 percent.) “And for those remaining Americans, there is no deadline. We remain committed to get them out if they want to come out.”

Still, after a half-century in national politics, Mr. Biden knows better than most how quickly the news cycle moves on. His advisers and allies expect another round of tough criticism around the 20th anniversary of the Sept. 11 attacks with pictures showing the Taliban flag flying over Kabul.

Within days or weeks of that, though, they assume that attention will shift back again to the coronavirus pandemic, the president’s proposals for large public works projects and social welfare programs, and a dozen other issues that will absorb the public more than far-off Afghanistan.