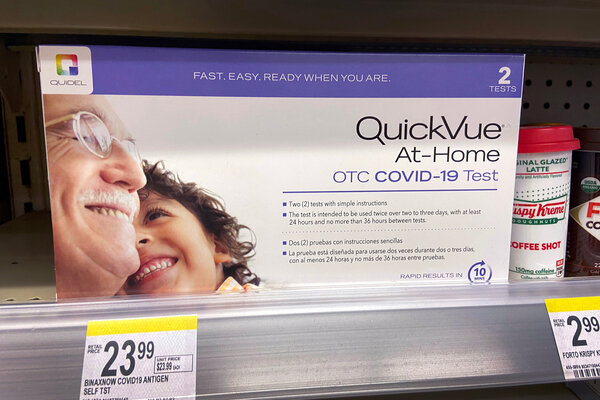 The White House on Wednesday is set to announce a billion-dollar investment in at-home rapid coronavirus tests that it says will help quadruple their availability by later this year, according to a White House official.

By December, 200 million rapid tests will be available to Americans each month, with tens of millions more arriving on the market in the coming weeks, the official said. The White House is also set to announce that it will double the number of sites in the federal government’s free pharmacy testing program, to 20,000.

The changes reflect the administration’s growing emphasis on at-home testing as a tool for slowing the spread of Covid-19. President Biden in September said that he would use the Defense Production Act to increase the production of rapid testing kits and would work with retailers, including Amazon and Walmart, to expand their availability. He pledged $2 billion to the effort, or roughly 280 million tests.

“By year’s end, the manufacturer plans to produce more than 100 million tests per month, and this number will rise to 200 million per month by February 2022,” he said. Like tests already available from Abbott, Quidel, Becton Dickinson and other makers, Acon’s test is made to detect proteins from the virus on a nasal swab, and produces results in 15 minutes.

Rapid tests can cost as little as $10, which public health experts say can still be prohibitively expensive for some people, and are not as sensitive as P.C.R. tests. Experts have said they are still accurate in detecting the virus in someone who is in the first week of displaying symptoms, when the viral load is likely to be highest.

Some pharmacies and retailers have recently struggled to keep tests in stock, or have had to place limits on how many customers can purchase. Demand has increased with the school year underway and employees returning to many workplaces.

Last week, Ellume, an Australian company that makes a widely available at-home coronavirus test, recalled nearly 200,000 test kits because of concerns about a higher-than-expected rate of false positives. The recall did not affect most of the 3.5 million test kits Ellume has shipped to the United States.