WASHINGTON — President Biden on Thursday ordered the Affordable Care Act’s health insurance marketplaces reopened to give people throttled by the pandemic economy a new chance to obtain coverage, and he took steps to restore coverage mandates that had been undermined by his predecessor, including protecting those with pre-existing medical conditions.

Thursday’s orders also took aim at Trump-era restrictions on Medicaid, especially on work requirements imposed by some states on poor people trying to obtain coverage. Separately, Mr. Biden moved toward overturning his predecessor’s restrictions on the use of taxpayer dollars for clinics that counsel patients on abortion, both in the United States and overseas.

Mr. Biden used Thursday’s appearance at the White House to begin shoring up health care programs and policies that have been critical to a Democratic resurgence. Perhaps no policy is as important to him as the Affordable Care Act, which he helped secure as President Barack Obama’s vice president. President Donald J. Trump tried and failed to overturn the law, then weakened it with executive actions and rules, including making it easier for people to buy cheap, short-term plans that are not required to cover pre-existing medical conditions.

“The best way to describe them: to undo the damage Trump has done,” Mr. Biden said of his actions during a brief signing ceremony in the Oval Office. “There’s nothing new that we’re doing here, other than restoring the Affordable Care Act and restoring the Medicaid to the way it was.”

Under the order Mr. Biden signed Thursday, a new “special enrollment period” will open on Feb. 15 and run through May 15. A senior administration official said the reopening would be accompanied by the kind of patient outreach — paid advertising, direct outreach to consumers and partnerships with community organizations and advocacy groups — that was abandoned by the Trump administration.

Typically, Americans in the 36 states that rely on the federal marketplace can buy insurance only during a six-week period in the fall, a restriction meant to encourage people to hold coverage even when they are healthy. The sign-up period for this year’s coverage ended in mid-December, with enrollments only slightly higher than they were last year. But the Trump administration barely advertised it.

In contrast, most of the 14 states that operate their own Affordable Care Act marketplaces, as well as the District of Columbia, not only opened enrollment to everyone during the early months of the pandemic but worked hard to publicize the option. The Biden administration expects that some states will follow suit and reopen their own exchanges, the senior official said.

The insurance industry, which usually supports tight limits on insurance enrollments, is backing the extra enrollment period now. Matt Eyles, the president and chief executive of America’s Health Insurance Plans, an industry trade group, said Mr. Biden had created “more pathways for Americans to obtain coverage that is so essential to their health, well-being and peace of mind.”

Mr. Biden’s actions appear to take aim at a number of Mr. Trump’s policies. In 2018, citing complaints about the price of Affordable Care Act coverage, the Trump administration issued a rule that extended the length of less-expensive short-term policies to up to three years from three months. Such policies do not have to cover pre-existing conditions and can exclude common benefits mandated by the act like maternity care, mental health care or prescription drugs.

The Trump administration also made it easier for small businesses to band together to offer plans that escape some Affordable Care Act coverage requirements.

Mr. Biden has given federal agencies a broad mandate to examine “policies or practices that may undermine protections for people with pre-existing conditions,” but the Trump rules could take months to undo. Should they be overturned, patients who have such policies would be unable to renew them, which could leave them without insurance if they think coverage is too expensive. Mr. Biden campaigned on raising the subsidies for plans to make them more affordable.

“These people largely bought these alternative plans because of the prohibitive premiums that those with minimal or no subsidies were faced with under Obamacare,” Robert Laszewski, a former health insurance executive who is now a consultant in Alexandria, Va., wrote in a blog post last week. “If the Biden administration now repeals those rules, without first expanding the subsidies for these people, they will be left without any kind of insurance.”

Even though such plans tend to turn away people with a history of illness and have left others mired in debt, Joel White, a Republican strategist who focuses on health policy and has sometimes been critical of Mr. Trump, questioned the effort to quash short-term policies. 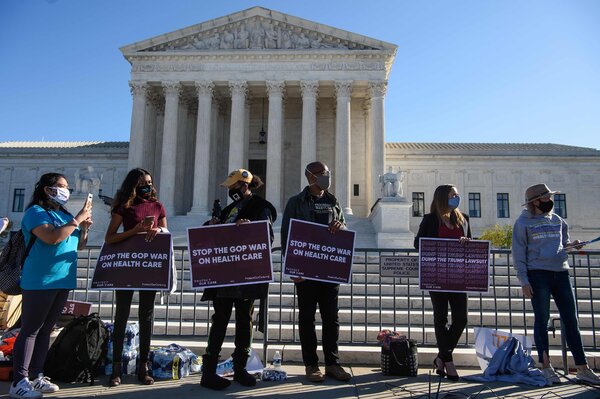 “If your coverage just got a lot less affordable because you’ve lost your job and lost your income, the last thing we should be doing is taking away an option that offers an affordable choice,” Mr. White said, adding that some consumers “don’t want all the bells and whistles; they might be 60 years old and don’t want maternal health coverage.”

About 15 million Americans are uninsured and are eligible for marketplace coverage, according to a recent analysis from the Kaiser Family Foundation, which has also estimated that as many as three million people have lost employer-based coverage during the pandemic. About four million could sign up for Affordable Care Act plans that would cost them nothing in premiums.

“For the four million people who could be getting free coverage who are instead uninsured — that, to me, is screaming out for outreach,” said Cynthia Cox, a vice president at the foundation and an author of the analysis.

But some “zero premium” plans, like many insurance policies offered through the Affordable Care Act marketplaces, would come with high deductibles, which often require people to pay thousands of dollars for care before their insurance kicks in. And more than two million poor uninsured adults are ineligible for both Medicaid and subsidized Affordable Care Act plans, a coverage hole created when the Supreme Court gave states the choice of expanding Medicaid, which initially had been mandatory.

The White House had no estimate for how many people might sign up for coverage during the new enrollment period. Republican opponents of the health care law opposed the move and cited rising premiums to argue that the law should be scrapped.

“The A.C.A. is neither affordable nor caring,” said Adam Brandon, the president of the conservative group FreedomWorks.

The law is also the subject of a pending Supreme Court case. The case was brought by Republican officials who argued that its mandate requiring insurance became unconstitutional after Congress in 2017 eliminated the penalty for failing to obtain health coverage.

The justices are expected to rule on the case this spring. A number of experts predicted, after oral arguments last fall, that the law would survive the challenge.

Dr. Natalia Kanem, the executive director of the United Nations Population Fund, said the decision would greatly help the agency’s work not only in family planning, but in other health services for women and girls in poor countries.

“We now have the support of a very important member state,” Dr. Kanem said in a phone interview.

The rule has been riding a philosophical seesaw for decades — in place when a Republican occupies the White House and overturned when a Democrat moves in.

Mr. Biden also directed the Department of Health and Human Services to, “as soon as practicable, consider whether to suspend, revise, or rescind” the so-called domestic gag rule — a collection of regulations imposed by the Trump administration that prohibit federally funded family-planning clinics from counseling patients about abortion.

The Guttmacher Institute, which tracks access to abortion, wrote last year that the rules have
cut the “national family planning network’s patient capacity in half, jeopardizing care for 1.6 million female patients nationwide.” The presidential directive virtually guarantees that the health department will overturn those rules, though that could take months.

The president’s order will also direct federal agencies to review policies, including waivers granted to states, that discourage participation in Medicaid, the public health insurance program for poor and disabled people. Enrollment in Medicaid has grown substantially during the pandemic, in part because people who have lost jobs and health insurance have turned to it.

The Trump administration approved waivers in 12 states that would require certain Medicaid beneficiaries to work a minimum number of hours a week or risk losing their benefits. Four of those pilot programs have already been overturned by courts, and the Biden administration has the authority to end them all, although the Trump administration in its final weeks took steps to make that process more difficult.

Another waiver, completed this month in Tennessee, would give that state fixed funding — or a block grant — to cover its Medicaid population while loosening many of the rules about how the program is run. That waiver could also be canceled.

Noting that the Supreme Court has agreed to hear the Trump administration’s appeal of lower court decisions that overturned Medicaid work requirements in Arkansas and New Hampshire, the groups said time was of the essence. The requirements would have denied health care coverage under Medicaid to poor people in those states unless they were working, volunteering or training for a job.

“Swift action should be taken to ensure these proposals are rejected,” the groups wrote, “especially in light of the ongoing pandemic, the economic recession, and ongoing and historic impacts of structural racism.”

Nigel Farage hits out at Sturgeon and Salmond over independence row: ‘Goal is wide open!’

Facebook closes down office after employee diagnosed with coronavirus