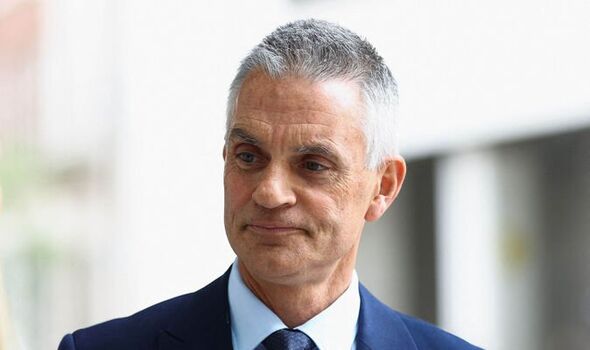 Director general Tim Davie insisted he is “open minded” about scrapping the annual £159 bill after the government argued the system was outdated. But peers examining future ­funding options were told that “no system is perfect”. A strategy review setting out the broadcaster’s core principles and role will be published “in the coming weeks”. Mr Davie told the Communi-cations and Digital Committee in the House of Lords yesterday that clearly defining the BBC’s purpose first would allow decisions to then be made about how to fund it.

He told peers the corporation is receptive to all options and it will be up to Parliament to take the decision on behalf of licence fee payers.

Mr Davie added: “We believe we need a clear set of principles.

“The second (aspect) is ­consultation because the people who should decide what happens to the BBC are obviously going to be elected officials. But we need to make sure the licence fee payer and the public are heard and seen.

“So, we’re going to put proposals forward in the coming weeks – in terms of principles and consultation.

“Because I just think you need to know, ‘What are the things that we need to look at when we’re looking at various options?’ We’re tuning those now.”

Last month, BBC bosses were ­formally given notice by the ­government that the TV licence fee is facing the axe.

Culture Secretary Nadine Dorries has published proposals committing to overhaul the way the corporation is funded because it is “completely outdated”.

A Lords committee examining future funding of the BBC heard the board has already started looking at all options for how the BBC is paid for and how the money is collected.

Among the possibilities are a two-tier system, where viewers pay a top-up fee to access certain content, and collecting the licence fee by tagging it on to council tax bills.

BBC chairman Richard Sharp said: “The board hasn’t ruled out anything.

“We’ve been charged with the fact that the BBC faces an existential question and the board has to take very seriously that charge, to look at all options without preconceptions.

“The fact we understand the value of public service broadcasting informs that, but it doesn’t rule out certain mechanisms, or adjustments we might need to make, or changes.”

The licence fee is guaranteed until 2027 when the BBC’s royal charter is up for renewal.

Labour’s Lord Lipsey urged BBC bosses to prioritise older viewers instead of trying to spend “vast amounts of money” trying to win over young people who do not tune in. He added: “I would love to see a recognition that you are focused on the hard choices you have to make.

‘We want to stop the French!’ Farage sees crowd cheer as he faces Tory on Brexit fishing

Factbox: Latest on the spread of the coronavirus around the world