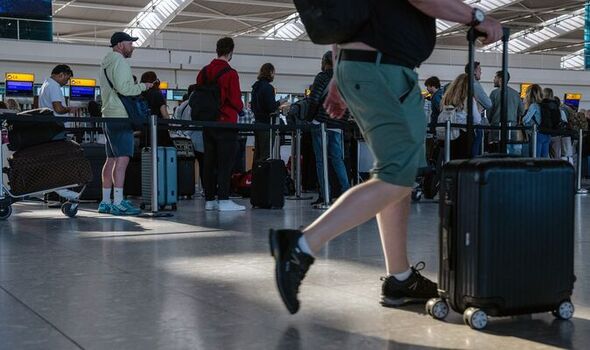 The Government has fast-tracked the vetting process to help airports and airlines tackle staff shortages which have led to cancelled flights, queues at check-ins and long delays at baggage collection.

Transport Secretary Grant Shapps said: “People have made huge sacrifices during the pandemic and deserve their flights to run on time, without complications, and without being cancelled at the last minute.”

But he called on the travel industry to deliver every flight scheduled, and to ensure any cancellations are announced well in advance so that holidaymakers are able to make new plans.

School summer holidays beginning this month will provide the first opportunity many families have enjoyed for a sunshine break overseas since the Covid pandemic began.

New aviation recruits are completing standard background checks within five days, while counter terrorist checks are being processed in under ten days on average. This is a reduction from the 20-day average turnaround in March, before the Government’s priority measures were introduced.

It allows the aviation industry to get new employees such as x-ray screeners into work sooner.

Ministers say they aim to avoid a repeat of the disruption experienced by travellers over Easter, without compromising security.

Mr Shapps said: “These statistics demonstrate how the Government is doing its bit to help deliver for passengers; now the industry must fulfil its responsibilities.”

He added: “While this is a challenging time for the sector, it is not acceptable for the current disruption to continue as we head into the summer peak. The public deserves to know now whether or not their flight will run over the summer, and so I reiterate my call for the industry to commit to deliver the flights they have scheduled, or to cancel them well in advance so people can make other arrangements.”

Difficulties at the nation’s airports continued last night, with one passenger travelling through Heathrow describing the scene at baggage claim as looking like “a disaster movie”.

Adam Kent, aged 59, had arrived at Terminal 3 from Orlando, Florida, and said the sight “made a horrendous first impression of chaos” for international visitors.

“(There was) lost luggage everywhere, stacked between baggage belts, everyone stepping over it and no-one doing anything about it,” he said.

“Being brutally honest, it looks like a serious health and safety issue.

“No-one visible on the ground to explain the carnage or sort out the mess, it seems like lots of luggage has not arrived with passengers and just been dumped.”

Mr Kent, from Worcestershire, added it was “appalling customer service” at the airport.

He said: “The left and abandoned luggage was left unsecured and could easily be stolen.”

The Government announced a 22-point plan last week designed to ensure passengers don’t face a summer of disruption. This includes measures to help the industry recruit and train staff and ensure the delivery of realistic summer schedules.

Employers have been given permission to begin training new staff while their background checks are ongoing, further speeding up the recruitment process.

Other measures include allowing HM Revenue and Customs employment history letters to be used as reference checks for new staff, and setting up a dedicated jobs website for the aviation sector. As of 31 May, the Aviation Skills Retention Platform (ASRP) had 239 companies signed up and featured 770 live jobs and vacancies.

However, ministers have rejected calls to issue temporary visas for aviation workers. The Government says similar schemes in other sectors experiencing shortages, such as the HGV sector, have not been widely used and have not significantly contributed towards a solution.

EU TO CAVE: Brussels ‘will give up’ fishing demands over UK waters – deal still on

‘Angry’ Harry was ‘struggling to find himself’ before he met Meghan, expert says