The deputy leader of the Opposition ruled out working with Nicola Sturgeon’s party after a future general election and said Labour was focused on winning a majority. And she told an event in Edinburgh it was time to move on from referendums and focus on the priorities of the British public.

Making the case for the United Kingdom, Ms Rayner warned the rest of the UK would be left with inevitable endless Conservative rule without the help of Scottish voters and constituencies.

She told broadcaster Iain Dale at an Edinburgh Festival Fringe show: “I don’t think the people of Scotland should leave behind the people of Ashton-under-Lyne, either.

“The poverty that we face is the poverty they face and we both need a Labour government in order to make the changes that we need to make, whether that’s in Scotland or in England.”

She added: “I think breaking up the union is not the answer. 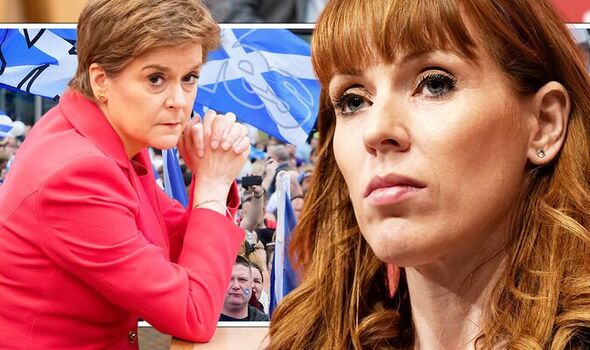 “Leaving us to perpetual Conservatism at Westminster is not very nice.

“But actually having a Labour Government could make all the difference.”

The Tories rely on England for the majority of their support in general elections, with pollsters believing it is almost impossible for Labour to get back into power without the support of voters in Wales and Scotland.

The Ashton-under-Lyne representative said Labour was in winning back support in Scotland but admitted there was still a long way to go.

“Respect is earned, it’s not given and I think we’ve been making progress to earn that respect,” she said.

Ms Rayner ruled out supporting IndyRef2 saying: “I’m against us going anywhere near a second referendum, if I’m honest.

“I think the Brexit referendum was enough for me.”

Ruling out the possibility of a coalition with the SNP after the next election, Ms Rayner said both her and Sir Keir Starmer wanted to see Labour fully in power.

“It’s not a possibility that we would work with the SNP – we want to win a majority,” she said.

“I think that is the biggest damage that’s being done in Scotland.”

The Conservatives have repeatedly warned Sir Keir would be willing to do a deal with the SNP and the Liberal Democrats in order to get is hands on the keys of No10.

They have warned it would risk a future Government shackled by the demands of separatists north of the border, and Sir Ed Davey’s pro-EU MPs.

Labour has repeatedly ruled out doing a deal with either party, but there have been allegations of an informal deal between the Lib Dems and Sir Keir’s party in parliamentary by-elections.

Minimal canvassing took place from Labour frontbenchers in the lead-up to the Tiverton & Honiton by-election on June 23.

Instead, the party focused their efforts on campaigning in the Wakefield by-election which took place on the same day.

Both parties won one seat each on the night, but claim they did not work together to bring about the outcome.

We must wrestle Britain! French put huge pressure on Macron to take on Boris over migrants

The race to train a new cohort of electric vehicle mechanics

Q: My employer owes me several months' worth of salary and says he cannot afford to pay me yet because business is really bad due to Covid-19. What should I do?