Mary Ann Mendoza, an “Angel Mom” who was scheduled to speak at the Republican National Convention Tuesday night, apparently was cut from the lineup of speakers, after The Daily Beast reported that, just hours earlier, Mendoza had shared a Twitter thread filled with anti-Semitic conspiracy theories and QAnon references.

Mendoza, a member of the Trump campaign’s advisory board, was slated to speak Tuesday night about the death of her son, a Mesa, Ariz. police officer, who was killed in 2014 in a head-on collision with a drunk driver who was in the country illegally.

Shortly before the second night of prime-time convention speeches was scheduled to begin,  CNN White House Correspondent Kaitlan Collins tweeted that “Mendoza’s speech has been pulled from tonight’s convention programming.” Other news outlets have since reported the same.

According to The Daily Beast, the Twitter thread which Mendoza had urged her more than 40,000 followers to read early Tuesday morning included a variety of anti-Semitic and conspiratorial claims, including excerpts from the “Protocols of the Elders of Zion,” a more-than-century-old hoax that has been used to justify persecution of Jews from Czarist Russia to Nazi Germany and down to the present. An official FBI Twitter account had linked to the Protocols, which the thread Mendoza retweeted said proved its authenticity.

The FBI has since removed and apologized for the tweet, explaining that it was sent by an automated account which posts links to documents made public in response to Freedom of Information Act requests.

Other posts in the thread advanced the notion that “malevolent Jewish forces in the banking industry are out to enslave non-Jews and promote world wars … that the Titanic had been sunk to protect the Federal Reserve, and that every president between John F. Kennedy and Donald Trump was a ‘slave president’ in the thrall of a global cabal.” 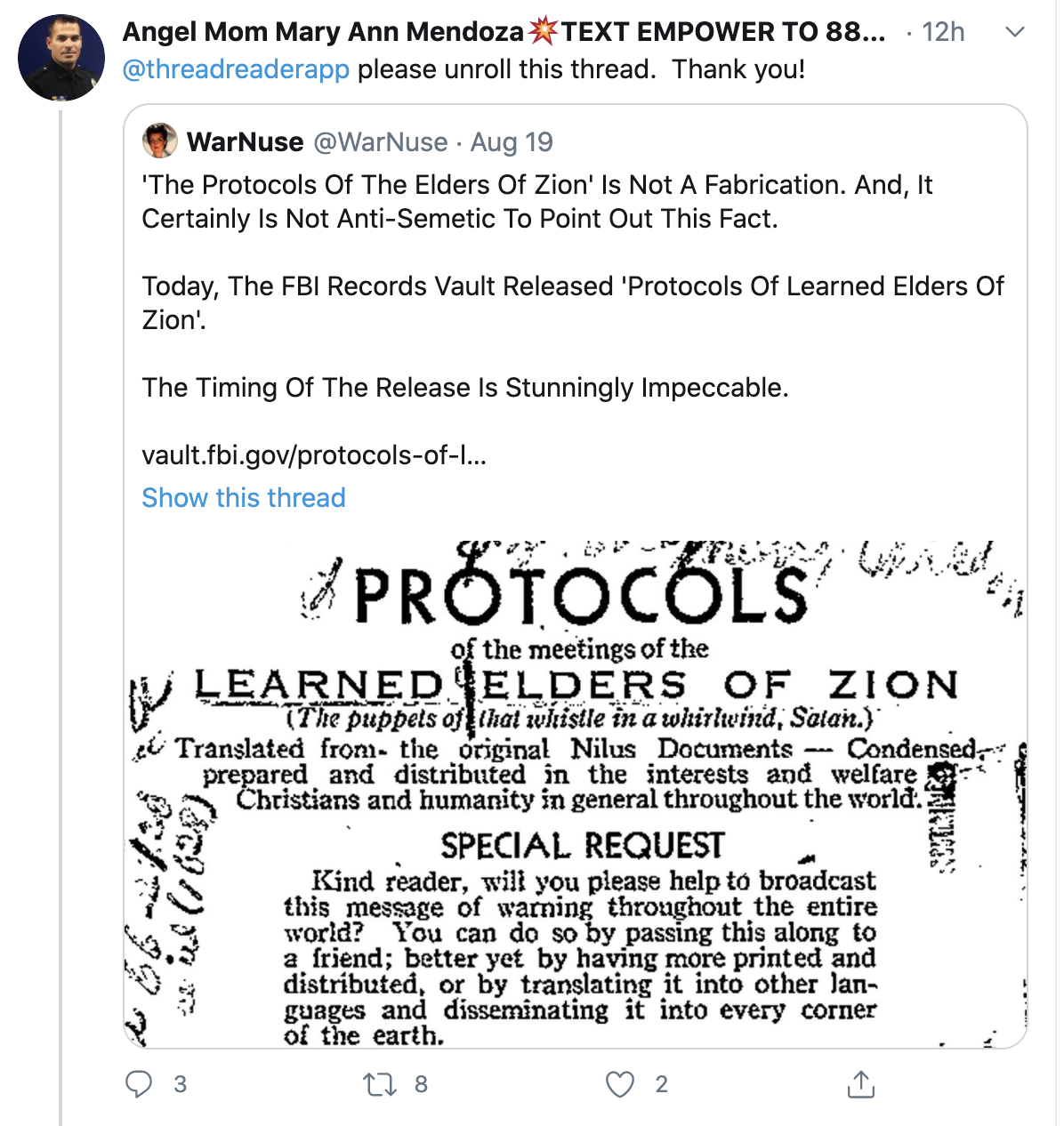 Mendoza’s original tweet urging her followers to “Do yourself a favor and read this thread,” has been deleted. Following publication of The Daily Beast story, she tweeted an apology, writing: “I retweeted a very long thread earlier without reading every post within the thread. My apologies for not paying attention to the intent of the whole message. That does not reflect my feelings or personal thoughts whatsoever.”

In addition to serving on the advisory board of Trump’s campaign and Women for Trump, Mendoza, is also listed as a consultant to We Build the Wall, the crowdfunded border wall campaign led by former White House advisor Steve Bannon and others who were arrested last week for allegedly defrauding hundreds of thousands of donors to the campaign, which promised to donate 100 percent of funds raised to private border wall construction. Mendoza has appeared in fundraising videos and at events for We Build the Wall.

According to a preview of Tuesday night’s events released by the Trump campaign earlier Tuesday evening, Mendoza was planning to praise Trump as “the FIRST political leader we’ve ever seen take on the radical Left to finally secure our border and to end illegal immigration since day one.”