Congress gave final approval to the Inflation Reduction Act, which will lower the cost of prescription drugs, extend health care subsidies and invest billions into climate and energy programs. 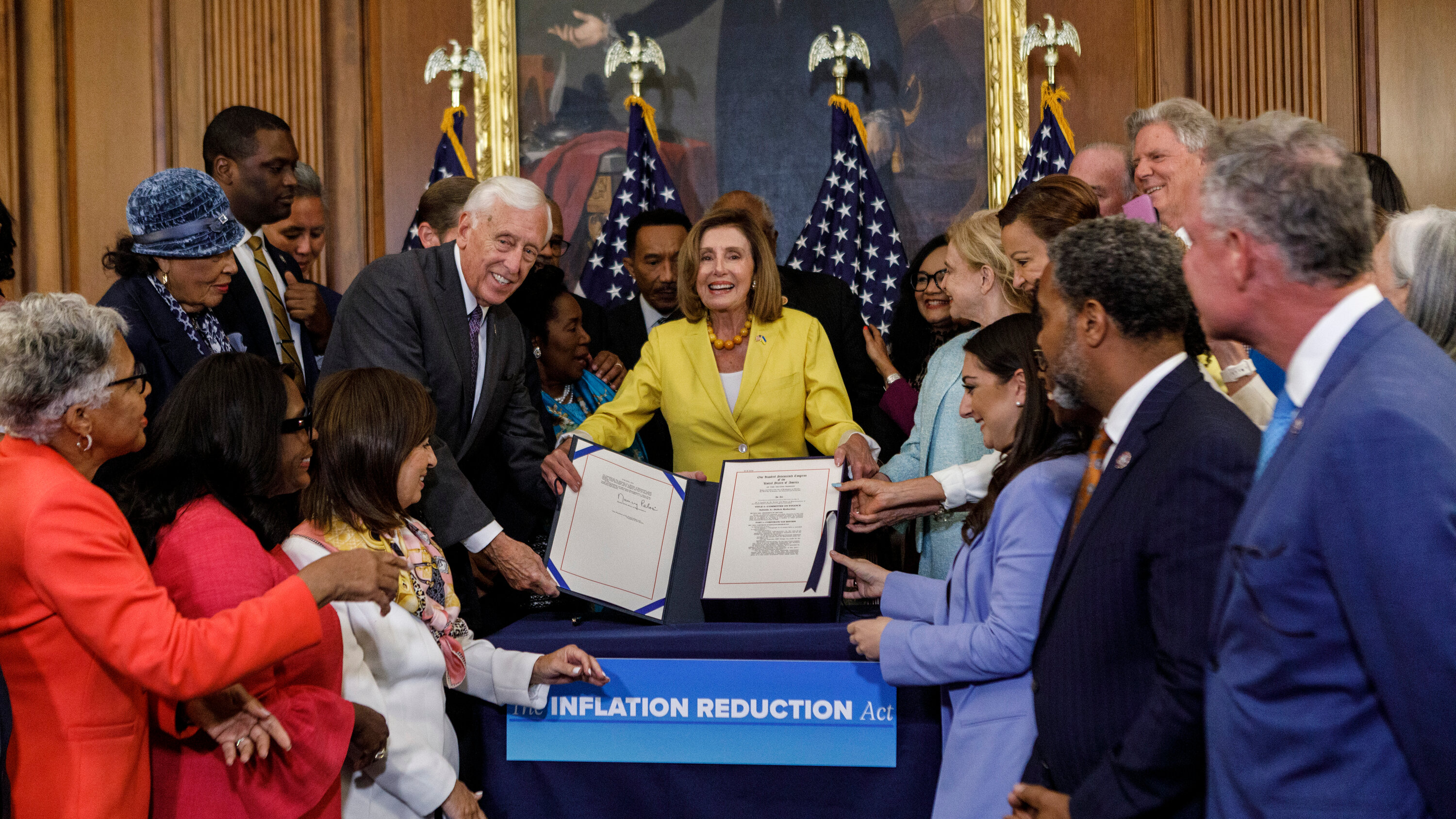 WASHINGTON — He promised a new social safety net. He pledged to develop a robust plan to fight global warming. He vowed to reduce the gap between rich and poor by making the wealthy “pay their fair share.”

And along the way, Joseph R. Biden Jr. often said as he battled Donald J. Trump for the White House in 2020, he would prove that democracy still works in America.

With final House passage of the Inflation Reduction Act on Friday, President Biden is poised to deliver the latest in a series of legislative victories that will ripple across the country for decades — lowering the cost of prescription drugs, extending subsidies to help people pay for health insurance, reducing the deficit and investing more than $370 billion into climate and energy programs.

“The choice we face as Americans is whether to protect the already-powerful or find the courage to build a future where everybody has a shot,” Mr. Biden said on Twitter. “Today, I proudly watched as House Democrats chose families over special interests.”

Even with the latest legislative triumph, the president’s accomplishments on Capitol Hill fall far short of the scale and ambition of F.D.R.’s New Deal or Lyndon B. Johnson’s Great Society. And passage of Friday’s bill may say less about Mr. Biden’s ability to restore American bipartisanship than it does about the deep ideological breaches in his own party, which forced him to accept a much scaled-back version of his original legislative goals.

But taken together, the bills Mr. Biden has helped usher through a closely divided Congress since taking office 18 months ago touch many parts of American society.

There will be a vast new pot of money to combat climate change. Medicare will be free to negotiate for lower drug prices. The government will invest billions to help computer chip makers compete. Health care subsidies will be extended for years. Lead pipes will be replaced. Broadband internet will be built in poor and rural communities. Roads, bridges and tunnels will be restored. New gun safety measures will go into effect and background checks will be expanded. The nation’s budget deficit will be reduced.

To pay for some of it, investors will send more of their profits to the government, with a new tax on company stock buybacks and a 15 percent corporate minimum tax for wealthy companies.

“Can’t believe this has to be said again, but raising taxes during a recession is NOT a good idea,” Representative Jim Jordan, Republican of Ohio, said on Twitter moments after the bill had enough Democratic votes for passage.

Since taking office, Mr. Biden has already signed a $1.9 trillion pandemic rescue plan, a $1 trillion infrastructure measure, a $280 billion chip manufacturing bill and bipartisan gun legislation intended to prevent dangerous people from accessing firearms. Along with Friday’s bill, the legislation passed thus far will most likely end up as the centerpiece of his legacy as the nation’s 46th president. 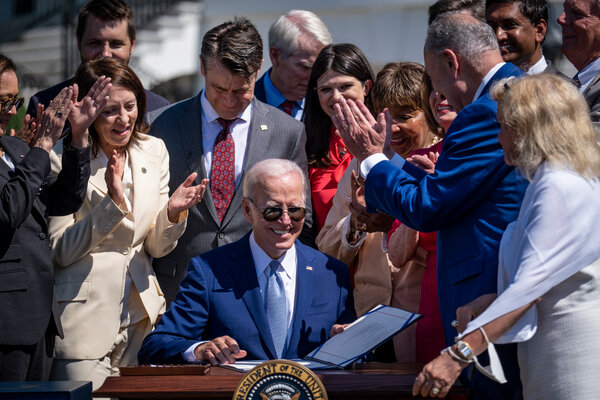 “It’s still consistent with what the president has always done which is keep his head down and do the necessary work,” said Cedric Richmond, a senior official at the Democratic National Committee who served as a senior adviser for Mr. Biden. “Families were feeling the effects of higher costs and the president wanted to keep his head down and address it. That until now has been the focus.”

The challenge now for Mr. Biden and his administration is to convince the American people of that after more than a year of griping and political hand-wringing among some in the Democratic Party.

A substantive legislation. The $370 billion climate, tax and health care package that Congress approved on Aug. 12 could have far-reaching effects on the environment and the economy. Here are some of the key provisions:

Auto industry. Until now, taxpayers could get up to $7,500 in tax credits for purchasing an electric vehicle, but there was a cap on how many cars from each manufacturer were eligible. The new law would eliminate this cap and extend the tax credit until 2032; used cars will also qualify for a credit of up to $4,000.

Energy industry. The bill would provide billions of dollars in rebates for Americans who buy energy efficient and electric appliances. Companies would get tax credits for building new sources of emissions-free electricity. The package also includes $60 billion set aside to encourage clean energy manufacturing and penalties for methane emissions that exceed federal limits starting in 2024.

Health care. For the first time, Medicare would be allowed to negotiate with drugmakers on the price of some prescription medicines. The bill would also extend subsidies available under the Affordable Care Act, which were set to expire at the end of the year, for an additional three years.

Tax code. The bill would introduce a new 15 percent corporate minimum tax on the profits companies report to shareholders, applying to companies that report more than $1 billion in annual income but are able to use credits, deductions and other tax treatments to lower their effective tax rates. The legislation would bolster the I.R.S. with an investment of about $80 billion.

Low-income communities. The package includes over $60 billion in support of low-income communities and communities of color that are disproportionately burdened by climate change. Among the provisions are grants for zero-emissions technology and money to mitigate the negative effects of highways and other transportation facilities.

Fossil fuels industry. The legislation would require the federal government to auction off more public space for oil drilling and expand tax credits for coal and gas-burning plants that rely on carbon capture technology. These provisions are among those that were added to gain the support of Senator Joe Manchin III, Democrat of West Virginia.

For all his legislation will achieve, Mr. Biden fell into a kind of political trap, setting expectations at sky-high levels and allowing a sense of disappointment to harden among his closest allies as key priorities — once included in his Build Back Better agenda — had to be abandoned.

To the dismay of many of the president’s supporters, there will be no free community college, no federally paid family leave and no new climate enforcement measures. The nation’s young children will not go to preschool for free. Parents will not receive federal help with child care. Medicaid will not be expanded in a dozen states and undocumented immigrants will not be given legal status. There will not be a tax on the superrich, and no extra money will go toward creating affordable housing.

Mr. Biden has said that it is all about compromise. But the process of negotiating, which played out day after day on social media and in newspapers, left many people with the feeling that more was lost than gained.

“My instinct is that these don’t add up to transformative matters on the scale of Social Security, Securities Exchange Act, Federal Housing Administration, Civil Rights Act of ’64,” said David M. Kennedy, a historian at Stanford University and the author of “Freedom From Fear: The American People in Depression and War, 1929-1945.”

Spain aims for end-June return to normality, to phase out coronavirus lockdown