Athleta, the activewear brand for women and girls owned by Gap Inc., had never sponsored an athlete when it approached the six-time Olympic champion sprinter Allyson Felix in 2019, shortly after she took Nike to task for its pay practices for pregnant runners.

The smaller company was interested in supporting Ms. Felix’s career, and said it would not penalize her for losing races or choosing to have more children. (Nike changed its policy for pregnant athletes after the criticism by Ms. Felix, whose contract with the company ended in 2017.) She said that she liked that Athleta was led by women and that it appreciated that she was a mother as well as an athlete.

“It’s a very pressured situation to be sponsored traditionally in track and field — it’s about numbers if you don’t perform, reductions and all of these things,” Ms. Felix, who will compete in the Tokyo Games next week, said in an interview. With Athleta, she added, “I felt like I had more value as a person, and that was something I hadn’t experienced before.”

A growing number of top women athletes, including Simone Biles and former Olympians, have been choosing to strike new types of deals with smaller activewear brands instead of traditional sponsors like Nike. Several young female runners say that smaller brands are willing to work with them in different ways, like bringing them on as employees, giving them equity or involving them in new products, and that they are paying more attention to their personal stories and Instagram accounts than their race performance.

Bigger apparel companies like Nike and Adidas are established power players that can often drastically increase an athlete’s visibility through marketing. But critics say they do not always put the athletes first. Nike, for instance, has come under intense scrutiny in recent years for its treatment of pregnant athletes, accusations of bullying and restrictive contracts. 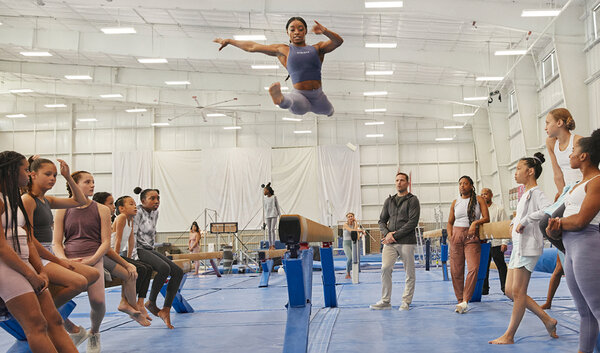 Runners have traditionally been paid by sponsors for achievements like completing a specified number of races per year or attaining certain rankings, medals and times. To some, it felt “very transactional,” said Colleen Quigley, a steeplechaser who left Nike this year and is now sponsored by Lululemon. That financial incentive fueled an intense pressure to compete, even if an athlete was struggling or injured, and can have a deleterious psychological impact, she said.

Ms. Biles ended her sponsorship with Nike this year and moved to Athleta, telling The Wall Street Journal that with the smaller brand, “it wasn’t just about my achievements, it’s what I stood for and how they were going to help me use my voice and also be a voice for females and kids.” After she dropped out of the Olympic gymnastics team and all-around competitions this week, saying that the pressure she faced had adversely affected her mentally, Athleta issued a statement of support.

“We stand by Simone and support her well-being both in and out of competition,” Kyle Andrew, the company’s chief brand officer, said in a statement. “Being the best also means knowing how to take care of yourself. We are inspired by her leadership today and are behind her every step of the way.”

Female athletes say it has not always been that way.

“As athletes, we’re always going to struggle with that sense that we only have value if we can run fast, jump far or throw far,” Ms. Quigley said. “It’s not true, but it can feel that way really easily.”

Platforms like Instagram have become a particular asset for athletes, especially those in sports that typically command major attention only once every four years. They also give athletes a way to be valued by sponsors regardless of their ranking.

Today, “our contracts are incorporating social media more and more,” said Alexi Pappas, a former Nike athlete, writer and filmmaker who competed in the 2016 Olympic Games in Rio, and is now sponsored by companies including Champion. “There are other ways to add value, and those can be social media, press appearances, writing blogs and so on.”

Nikki Neuburger, Lululemon’s chief brand officer, said that it was aiming to work with mindful, well-rounded athletes, and that the brand and its customers cared less about placements and records. (Ms. Quigley withdrew from the U.S. Olympic trials this summer, but if she had gone to Tokyo, she would have been the brand’s first Olympic athlete to compete in track and field.)

“There’s still so much tremendous recognition that comes with winning and performing at an elite level,” Ms. Neuburger said. “What’s changed over time is that in and of itself, that’s not what’s inspiring people — they want to know the highs and lows of the journey to get there, they want to know what you’re doing outside of the track and not just on race day.”

The newer sponsorship deals also follow several years of reports about the intense pressure and stringent contracts that can exist between sponsors and elite athletes, and the aggressive tactics industry powerhouses use to keep top performers on their rosters.

In 2016, Nike made headlines when it sued Boris Berian, a star runner at the time, after his contract with the brand expired and he tried to sign with New Balance. Nike claimed it matched New Balance’s offer. Mr. Berian’s representatives argued that Nike did not in fact match the offer, because the company’s proposed contract included “reductions” — clauses that allow sponsors to cut pay when athletes fail to meet certain performance metrics or attend competitions, even if they are injured.

The incident provoked criticism of such punitive clauses and illuminated the powerful negotiating stance of megasponsors. “I think of that as the beginning of this conversation in the running world,” Ms. Pappas said.

The unique pressures felt by women athletes have taken center stage more recently. Mary Cain, a former Nike runner who is now employed by Tracksmith and chief executive of Atalanta New York City, a professional women’s running team, told The New York Times that her Nike coaches urged her to lose so much weight that her body started to break down. Ms. Felix’s criticism of Nike’s pay policies for pregnant athletes, also in The Times, came after two of her former teammates shared their own harrowing experiences of dealing with pregnancy and sponsorships.

Nike said that it standardized a policy in 2018 that waived performance reductions for 12 months for pregnant athletes. It expanded the policy to 18 months in 2019. “We are proud of our current policy and believe it clearly conveys our support for athletes as they start their journey as mothers,” Sandra Carreon-John, a spokeswoman for Nike, said.

Restrictive policies around pregnancy were long the norm, though. Sally Bergesen, founder and chief executive of Oiselle, a small running company based in Seattle, said that her brand sponsored the runner Lauren Fleshman when she was pregnant in 2013, and knew at that time that many major sponsors would not sign a track and field athlete who was expecting.

“Up until then and I think still in some contracts, they classified pregnancy as an injury, which has always been as preposterous as it sounds,” Ms. Bergesen said.

Ms. Carreon-John noted that more than a third of the U.S. track and field women’s roster is made up of Nike athletes. “Individual situations of a handful of athletes are not representative of Nike’s support of women’s sport,” she said, adding, “No footwear, apparel or equipment manufacturer provides the level of support Nike provides to women’s sport, period.”

To be sure, Nike is a huge company and has supported a sprawling number of athletes for decades. “Nike has done a lot of great things, but sometimes when you’re the big brand, there are more opportunities to get things wrong at the end of the day,” said Merhawi Keflezighi, founder of HAWI Management, who represented Mr. Berian and manages Ms. Pappas. He commended the company for changing its policies for pregnant athletes and added that since 2016, the industry has become less aggressive about reduction clauses in contracts.

The new sponsorship opportunities are arising as the athletic apparel market continues to grow — a trend further fueled by the pandemic. Athleta and Lululemon were among the rare apparel brands that saw sales soar last year. In the running world, there were five to six brands that were more visible at the U.S. Olympic trials in Eugene, Ore., in June than in the past, Ms. Neuburger of Lululemon said.

“The athletic sportswear and athleisure market is transforming from growth to maturity with newer and rising entrants,” said Angeline Close Scheinbaum, associate professor of marketing at Clemson University. “So naturally, a shift in athlete endorsers from the market leader to other brands is occurring.”

Ms. Scheinbaum said that she viewed the trend as less of an exodus from established leaders and more about “athletes, especially women, joining a smaller brand that can become synonymous with these star athletes and their platforms and stories.”

Indeed, brands that are pursuing elite women athletes are keen to embrace their backgrounds and causes that matter to them. Ms. Cain said that the most famous women athletes have often become household names because they have an “and” tied to their performance — “athlete and activist” or “athlete and mental health advocate,” she said.

“Unless you have five different ways to sell yourself, you’re just not valued monetarily in the same way as the white dude next to you is,” she said. While that dynamic is unfair, she said, it has created a situation where women athletes often have bigger and more engaged followings online, and more brands are starting to take notice of that.

Ms. Andrew, Athleta’s chief brand officer, said that corporations were beginning to prize “female values” across the board.

“There are companies that don’t need to set up their partnerships in the same way they set them up for male athletes,” Ms. Andrew said. “There’s ways of supporting athletes in a female-forward way, and I do think it’s a change and female athletes are looking for more because like most women, we’re not just one thing in our lives.”

Athleta and Ms. Felix recently introduced a grant program to help athletes who are mothers cover child care costs while traveling to competitions. The company will also fund a post-Olympic gymnastics exhibition tour organized by Ms. Biles that will be an alternative to U.S.A. Gymnastics, the sport’s national governing body. Ms. Cain, working for Tracksmith, has been charged with building the brand’s presence in New York City. Oiselle, in order to attract women athletes, has even given some of them equity in the company.

Nike noted that it has pursued initiatives like Play Academy with the tennis star Naomi Osaka, which supports the participation of young girls in sports and focuses on Black, Asian and Latino communities. (The company has also been supportive of Ms. Osaka, who took time away from major tennis tournaments this year to focus on her mental health.)

Ms. Felix, who recently introduced her own sneaker brand, Saysh, said that when she was a teenager, “you had maybe three or four options, and you went a certain route and didn’t think about any of the other things because nobody was doing it.” She anticipates that changing even more.

Ms. Cain said that she viewed the evolving relationship between sponsors and athletes as a generational shift. Younger athletes are increasingly asking questions about sponsorships and health insurance, career skills and other forms of support that they may not have asked for in the past, she said.

“Gen Z kids are graduating from college and they’re signing contracts,” Ms. Cain said, adding that at 25, she was at the tail end of the millennial generation. “The difference between what they want and what people older than me wanted is very different. It used to kind of be, how much are you going to give me financially, and now it’s much more than that.”

Justice Dept. Backs Away From Trump Era but Is Still Expected to Test Garland