“There is something you can’t replace with an LED,” says Eileen Peters. But she’s not talking about the ambience in her home.

Mrs Peters is referring to the 176-year-old St John’s Point lighthouse on the County Down coast in Northern Ireland – which is earmarked to have its old filament light source replaced with a more modern LED. She and fellow filament enthusiasts argue that, however subtle, any change to the light is an unacceptable assault on heritage.

In recent years, lighthouse authorities in the UK and Ireland have been gradually upgrading the technology installed in lighthouses. Part of this work has involved switching filaments over to industrial-sized LEDs, which engineers say use less energy and are easier to maintain.

In most cases, hardly anyone has noticed the change. But in County Down, a battle has been brewing for five years. One set of proposals for changes to St John’s Point has already been vetoed by the local council, following protests by campaigners.

“We just want to preserve a thing of beauty,” says Mrs Peters, who refers to the fishermen and boat owners who sail from the nearby village harbours of Ardglass and Killough. “They actually love that light. I’m not exaggerating – they feel very strongly about it.” 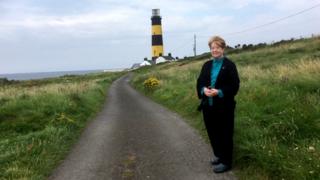 Out of 65 lighthouses around the island of Ireland, there are just a handful left that have not been switched over to LEDs. One is St John’s Point.

The lighthouse authority responsible for St John’s Point is the Commissioners of Irish Lights (CIL).

Around the rest of the British Isles the two other main lighthouse authorities, Trinity House and the Northern Lighthouse Board, have also been carrying out upgrades.

Some 125 lighthouses and other structures in Scotland and the Isle of Man, out of a total of more than 350, have had LEDs fitted by the Northern Lighthouse Board.

And about 20 out of 66 lighthouses around England, Wales, the Channel Islands and Gibraltar managed by Trinity House have been modernised so far, according to a spokesman. Two or three are completed every year, on average.

Engineers have tried to appeal to traditionalists to some degree.

“I relate to the locals who say that they want to make sure that the new solution looks and feels like their one,” says Esko Sorva, product manager at Finnish firm Sabik Marine, one of a few companies that manufacture LEDs for lighthouses and similar structures.

“There’s something magical and emotional about old lighthouses,” he adds.

A research team working for Trinity House and two other lighthouse authorities developed a special LED unit for lighthouses, which is designed to slot into the old Fresnel lens enclosure, a 19th Century invention that creates a far-reaching beam.

The system is intended to replicate as closely as possible the colour and character of the old filament-based light source.

The LED unit has huge fins to disperse heat from the high-powered LEDs at the centre of the structure and costs around €20,000 (£18,000; $24,000), depending on configuration, according to Sabik, one of two companies licensed to make and sell the LED units.

The firm recently installed one of these devices in a traditional lighthouse in Helsinki.

The CIL’s latest proposals for St John’s Point, shortly to be filed, seek to retain the existing sweeping beam emitted by the lighthouse, says Robert McCabe, the authority’s director of operations and navigational services.

The LED – like the one offered by Sabik – is now to be incorporated into a new rotating mechanism, preserving the beam, he says.

Alas, for some campaigners, any alteration is anathema. They say the beam will not project as far out to sea and it will also probably have a slightly different colour and character in various weather conditions.

“It is a challenge still to convince those people,” admits Capt McCabe.

One reason for the LED installations is that the old filament light sources are becoming harder to repair and replace. But some lighthouse authorities are also seeking to rely more heavily on renewables, says Capt McCabe. The more efficient LEDs can be powered via solar panels, for instance, and use batteries, rather than diesel generators, as back-up power sources.

But could the old technology not be kept in place at one or two lighthouses for the sake of local communities who want to preserve the light the way it is?

“The small things do make a difference,” insists Capt McCabe. “Having our aids to navigation powered by renewable energy sources is a really strong message and we’d be really committed to it for that reason.”

Another key benefit of the new LED units is their length of service, says Paul Briggs, programme manager at Trinity House.

If and when LEDs are installed, Mr Briggs and his colleagues will also carry out a wider modernisation programme at the lighthouse in question – from improving power systems, installing solar panels or servicing mechanical structures in the building.

“It is true that sometimes we’ll upgrade a lighthouse and the characteristic of the light may change,” he says.

However, the history of Trinity House stretches back more than half a millennium. For Mr Briggs, changes to lighthouses have come and gone as the tides – if not quite as frequently.

“You go back to when lighthouses were first thought of and you had a bonfire essentially on a stick and that was your light.

“LED technology is the next step, if you like, to providing what we think is the very best service… in terms of an aid to navigation for the mariner.”

Those opposed to the changes suggested by the CIL in County Down don’t have any intention of backing down, however. Mrs Peters says she and her companions are keen to keep pressure on the local council in order to ensure St John’s Point is left exactly as it is, without an LED in sight.

“We’re determined to win,” she says.

‘Mediocre’ men get ahead in finance more easily, say women in the industry.

Scale of job losses could be worse than forecast, BoE policymaker warns

Manchin Expresses Openness to Making Filibuster Harder to Use