An electric trickle is turning into a flood: As many as 100 new E.V. models are coming to showrooms by 2025. Heavyweights including Volkswagen, General Motors and Ford are floating promises of all-electric lineups within a decade.

The end times of gasoline can almost seem a fait accompli, except for one pesky issue: Even given Tesla’s strides, we’re still waiting for the first genuine E.V. sales hit, let alone a mass exodus from unleaded.

Automakers insist we’re “this close” to a tipping point. E.V. market share is expected to grow to as much as 50 percent by 2032, from just 1.7 percent last year, said Scott Keogh, president and chief executive of Volkswagen of America. While Tesla captured 80 percent of the U.S. market for electric vehicles in 2020, VW and other global giants — with war chests built on internal-combustion engines and unmatched scale and manufacturing know-how — are well positioned to take a piece of Tesla’s pie.

Globally, Volkswagen is poised to pass Tesla as the world’s biggest electric vehicle seller as early as next year, according to Deutsche Bank, with Europe and China its key markets. In America, where the brand remains an underdog, VW and other legacy automakers are concentrating fire on the sales fortress of compact S.U.V.s: Models like the RAV4, which deliver roughly four million annual segment sales. 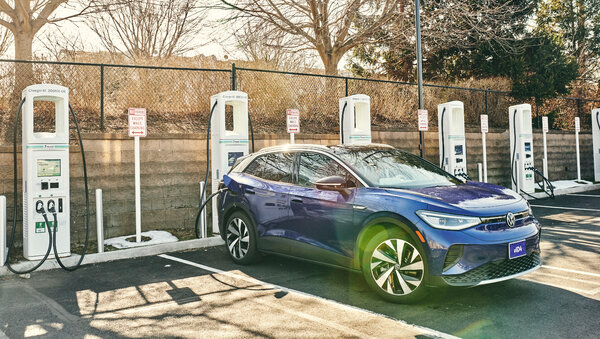 The idea, as ever, is to drive down prices and charging times of E.V.s, while bolstering driving range, until consumers see no reason to stick with polluting gasoline models whose energy-and-operating costs exceed the plug-in alternatives.

Like the Rolling Stones pushing the Beatles, Mr. Keogh said, healthy competition will ultimately benefit all E.V. fans and creators. And when consumers sees E.V.s proliferate in their neighbors’ driveways, and take their first test drive, there will be no going back.

“When you drive one, you’re driving the future, and that’s what people are going to want, no debate,” Mr. Keogh said.

The latest electric-S.U.V. hopefuls to reach showrooms are the VW ID.4, Ford Mustang Mach-E and Volvo XC40 Recharge. The Nissan Ariya, BMW iX and Cadillac Lyriq are set to arrive between late 2021 and next March. I drove the VW, Ford and Volvo to see which might knock Tesla’s Model Y S.U.V. down a peg — or at least outsell the 2014 Leaf.

Ford has branded its fabled Mustang name on an electric S.U.V., inflaming some boomers in the process. But the Mach-E seems the most straight-up rival yet to Tesla’s Model Y, in not only price and performance but also the Ford’s maximum 300-mile driving range.

Consumers have noticed: Ford sold 3,729 Mach-Es in February, the first full month of sales, almost single-handedly chopping Tesla’s dominant E.V. share to 69 percent, from 80 percent. If Ford could maintain that pace for a full year, the Mach-E would easily set a sales record for an E.V. not built by Tesla.

Tesla’s 326-mile Model Y Long Range still squeezes a few more miles from each onboard kilowatt-hour, owing to the carmaker’s expertise in aerodynamics, motor and battery efficiency, and to “simple” stuff that’s anything but: Its 4,416-pound curb weight undercuts the Ford by about 400 pounds. And Tesla rules the public charging space, with its Supercharger network that has rivals — now with a potential infrastructure lift from the Biden administration — racing to catch up.

The Ford fires back with a sculpted exterior versus the dad-bod Model Y, a tech-savvy interior with superior materials and craftsmanship, and winning performance of its own. With 346 horsepower from dual motors, the Mach-E Premium A.W.D. that I drove shot to 60 miles an hour in 4.8 seconds. Even the new Shelby GT500 — history’s mightiest Mustang, with 760 horsepower — won’t equal the 3.5-second 0-to-60 m.p.h. blast of this summer’s Mach-E GT Performance version.

The Shelby would shame the Mach-E or Tesla on any winding road, of course. Yet the Mach-E is reasonably fun through the curvy stuff, and glides with addictive thrust and confidence.

A cinema-scale, 15.5-inch touch screen sneaks past the Tesla’s 15-inch unit. Like other E.V.s, the Ford broadcasts its presence below 20 m.p.h., a throat-clearing hum to alert pedestrians. Inside, in its driver-selectable “Whisper” mode, the Ford would please the most persnickety librarian. Dial up “Unbridled” mode and the Mach-E trades glorious silence for an overwrought, faux-engine sound: Think a V-8, remixed by Kraftwerk. The soundtrack is apparently for people who need to be weaned off gasoline’s combustive beat, but it can be shut off with a screen switch.

E.V. shoppers can whistle over the Ford’s price, as little as $36,495, or $48,300 for the extended-range A.W.D. model. Those prices include a $7,500 federal tax credit that’s denied to buyers of Tesla (or General Motors) E.V.s, because those automakers have sold too many to qualify. So despite Tesla’s major, defensive price cuts for 2021, the most-affordable, 230-mile-range Mach-E undercuts Tesla’s 244-mile Standard Range by $6,700. A Mach-E Premium A.W.D. saves $2,900 versus a Model Y Long Range. In a surprisingly taut, compelling matchup with the Tesla, credit the government for what may be the Ford’s most alluring advantage: a $7,500 discount.

No, Volkswagen is not changing its name to Voltswagen, as the company briefly convinced some media and car fans in a marketing stunt gone bad. Regarding historic names, VW calls the ID.4 its most significant model since the original Beetle. But where the Beetle was a revolutionary leader, the ID.4 feels like a follower.

Based on my drive, the VW can easily top its 250-mile range rating, with 275 miles within reach. A rear-drive, 201-horsepower model rolls to 60 m.p.h. in 7.6 seconds. That’s on a par with gasoline sport utilities like the Honda CR-V, but pokey by E.V. standards. Dual-motor, all-wheel-drive models arrive later this year, promising 60 m.p.h. in under six seconds.

From a company famed for fun-to-drive German cars, the ID.4’s generic performance and styling are letdowns. Its infotainment system is even more disappointing: The clunky, vexing touch screen can’t touch the onscreen wizardry of the Ford, Volvo or Tesla.

The VW’s snappiest performance came during a fast-charging session at a Target in New Jersey, replenishing its 77 kilowatt-hour battery from 20 to 80 percent in an impressive 31 minutes. That growing network of Electrify America chargers is funded by VW’s $2 billion, court-ordered penance for its diesel emissions scandal. And VW is offering indulgences to ID.4 buyers, with three years of free public charging.

Still, as Tesla’s triumph and Chevy’s lukewarm Bolt have proved, there’s more to electric success than an attractive price. VW is aggressively investing $80 billion to develop E.V.s, but the ID.4 feels less like a market splash and more like a toe in the water. We’ll see if VW erred by not kicking off with a recognizable design that truly connects its nostalgic, weed-hazed past to today’s green virtues: the electric ID.Buzz Microbus, due in 2023.

Volvo seems such a natural fit for E.V.s. And the progressive-minded brand brings us the XC40 Recharge, an electrified take on its gasoline XC40.

The Recharge is like that perfect dining table in a shelter magazine: You’re not sure why it costs so much, but you want it anyway.

The Recharge’s wedgy Scandinavian styling tops every S.U.V. in this group, as does its lovely interior. That includes soft Nappa leather, versus the ascetic “vegan” materials of many E.V.s.

The drive is similarly breezy, with 402 horses and a quicksilver, 4.7-second flight to 60 m.p.h. The biggest tech talking point may be Android Automotive OS: The Recharge (and Volvo’s electric Polestar 2) introduces a cloud-based Google operating system that works like a dream, with Google Maps, search, an ultra-capable voice assistant and more. (Don’t confuse this with the ubiquitous Android Auto, which simply mirrors phone apps on a car’s screen.)

Several major automakers, including G.M. and Ford, plan to make Android Automotive the nerve centers of coming cars. If only the Volvo itself were as efficient.

The Recharge is an electron guzzler, with a 208-mile range that seems optimistic in real-world use. I drove the Recharge in frigid New York weather, which explained some but not all of its hunger for power: No matter how I babied the throttle, the Volvo stayed on a pace for 190 miles, at best, covering about 2.4 miles for each kilowatt-hour in the batteries. I can achieve 3.6 miles per kilowatt-hour with little effort in the Tesla Model Y and above 3.2 in the Ford.

Environmental Protection Agency numbers bear that out: Despite having virtually the same-size battery, the Tesla brings 326 miles of maximum range, 118 more than the Volvo. The Recharge is also expensive for its intimate size: $54,985 to start, and nearly $60,000 for the model I drove. That $7,500 federal tax break softens the blow. Yet if the Volvo indulges bourgeois buyers, they’ll also need to indulge its profligate ways.

GABF turns 40: A history of the festival that shaped American craft beer

Simon Wilson: Could Paula Bennett become the next mayor of Auckland?